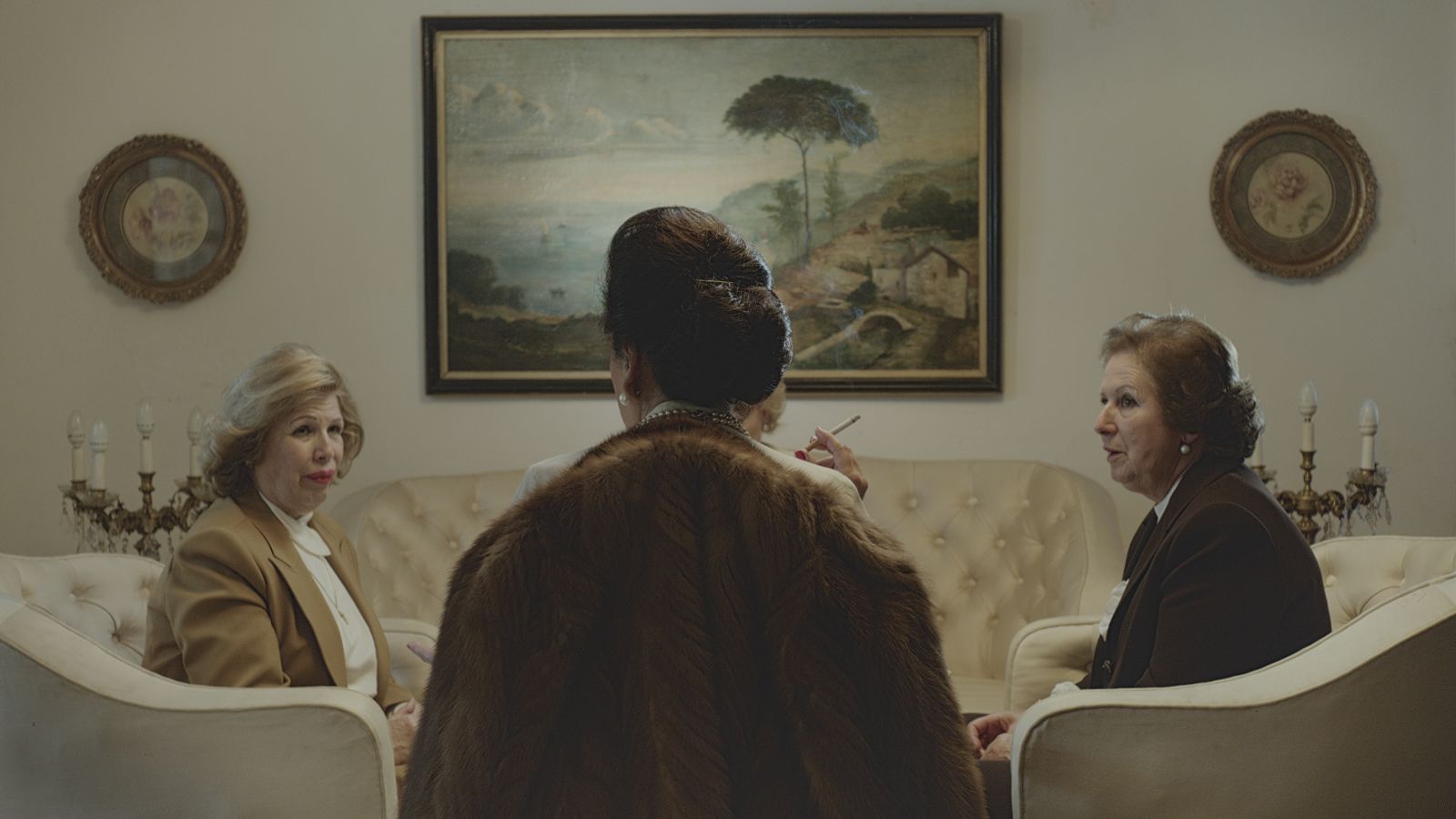 In the arid, lunar landscape of Ainhoa Rodríguez’s Destello Bravío, a whole village waits for things to fall apart. We’re in the rural outskirts of Spain’s Extremadura region, a few miles from the border with Portugal, but the hamlet remains unnamed—it juts into being from a fable, a land of almost biblical desolation and solitude. The old folks marooned here are the last surviving members of an old species, but the film is so committed to its oneiric and sepulchral fabric that they may as well be dead already. Ghosts in a ghost town. In a tale that draws so much of its perturbing allure from its relationship with the supernatural, it’s fitting that watching Destello Bravío should carry a kind of cosmic quality—like watching a dead star flicker, knowing the source of the light you see died a long, long time ago.

For death lingers everywhere in the film. Not violent death, but death by decay and oblivion. Destello Bravío chronicles a few days over Easter week, but the landscape we shuffle past gives no real sense of bloom: the fields are still barren, the sky wintry and cerebral. Even the clothes gesture at something funereal, as if everyone here was stuck in a state of protracted mourning. Unmoored to any semblance of plot, the film unspools as a series of vignettes, a meandering ethnography. It is a choral portrait where no character stands out, and the canvas is stitched together by the oral testimonies of the hamlet’s last residents. There’s Isa, the loner who fumbles through the film speaking tongues and taping prophecies into a recorder; Cita, who itches to leave everything behind but can only get as far as her benders take her; Maria, who mourns her late husband Paco; and a whole pantheon of late-aged women, custodians of the town’s stories and secrets.

Men and youngsters are noticeably elided from the frame. In Rodríguez’s script, the village is presided over by a matriarchy. No one mentions babies, the young have fled to the cities, many husbands have long been buried, and the wives-widows are a Greek choir without an audience. But for all its dark omens, Destello Bravío can feel surprisingly exuberant. There’s energy in the trance. Anytime they meet—whether to bicker, gossip, or reminisce—the women heal, and the stories they share, tales where childhood anecdotes teem with myths and spells, have a protective quality of their own.

And there’s lust, too. In the film’s arresting centerpiece, Rodríguez stages a Last Supper that feels yanked from a Luis Bunuel film. Clad in pearls and furs, the ladies open up about their sexual fantasies as they gnaw on the pot luck laid out before them. It’s a memorable scene, and possibly the most vivid example of the lysergic beauty Destello Bravío is drenched in: an hallucination couched in close-ups, where the women’s desires and fantasies are mashed together in a cacophony of murmurs and whispers. Credit for the alienating feeling goes to Alejandro Castillo and Eva Valiño’s sound design: a symphony of bodily sounds in which the biting, chewing, breathing, sucking, and sighing acquire a nightmarish aura. In the critical output of the COVID-era, lamenting the death of the theatrical experience has turned into a staid leitmotiv, but here’s a film that really does deserve to be seen in the largest screen available, if anything because of the sensorial feast it yields.

You do not turn to Destello Bravío for a knotty, mystery-packed small-town saga à la Twin Peaks (though the film does have its own arcane cosmology, its curses and legends). What the film promises, and what Rodríguez achieves, is something far more atmospheric and meditative, a blend between Denis Côté’s Ghost Town Anthology and Oliver Laxe’s Fire Will Come—an ode to faces and places on the brink of extinction.

Rodríguez has named William Eggleston among the film’s visual references, and Destello Bravío is very much of a piece with the photographer’s small-town America. Halls and doorways are to Rodríguez what parked cars are to Eggleston: they suggest transition, but always reflect stasis. Willy Jáuregui’s palette is muted, almost sun-punched, so much so that there are times the film carries an ancient aura, like an old color-scrubbed photograph dug out of the soil. And it’s just stunning. At the heart of Destello Bravío is a tension between the supernatural and the domestic, a magical realism that aligns Rodríguez with Victor Erice’s The Spirit of the Beehive. Everywhere you turn there are images plucked out of some strange reverie. Tractors plow the fields like extraterrestrial caterpillars, their lights probing the darkness. A ceiling tastes of orange tree. A bird of prey lands in a living room. “There’ll be a mighty flash,” Isa prophesies early on: “we’ll disappear off the map completely, and lose our memory.” In Rodríguez’s paean to a forgotten village, is this future, or is it past?