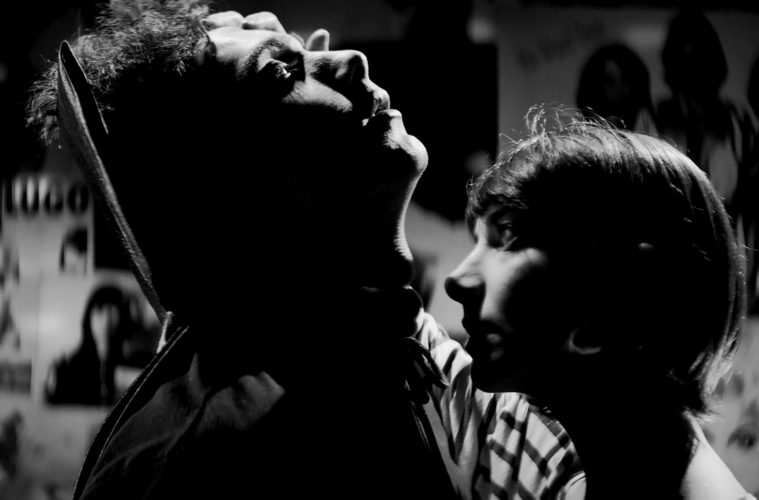 Perhaps one of the best pleasures to be had in doing any “best of the year” list — regardless of the medium — is getting the opportunity to pore over just how good we had it. The film year of 2014, with its wealth of creative and ambitious output, benefits greatly from a glance backward, in the process digging up treasures large and small. For the first time in quite a few years, I found myself sorting through a list of some fifty films, and marveling all over again at the richness there.

If there’s anything particularly worth singling out and noting about the year itself, it’s that both audiences and filmmakers seemed more willing to indulge in bolder, experimental material. Even on the end of the blockbusters, we had more than a few full-bodied adventures — Dawn of the Planet of the Apes, Snowpiercer, Noah and Interstellar — willing to gently push the envelope. Films like Selma and Mr. Turner appeared as prestige Oscar mongering from the outside, but delivered deep and resonant portraits of their respective subjects.

It was an exciting and invigorating twelve months that did not shy away from darkness or artistry, and it’s something of a miracle to find that of the films in the top ten, two are black-and-white, and three would be considered “horror.” If there’s a takeaway, though, it’s that each and every one of these movies challenged audiences on their own terms and delivered the kind of transporting experience only the best cinema can. Here’s to 2015; you’ve got a lot to live up to.

On the surface, both The Babadook and Spring look like traditional gothic horror set-ups; a desperate mother and son fighting against a boogeyman who might exist only in their minds, and a grieving young man finding that the love of his life and an ancient, unstoppable force are intertwined. It would be dismissively reductive, though, to call either Jennifer Kent or Justin Benson and Aaron Moorehead good horror filmmakers; they are, first and foremost, great storytellers who just happen to be tapping into a very old and beloved genre. Understanding that terror is most strongly felt when in close proximity to love, Kent visually creates the fevered tension that comes with raising difficult children, while Benson and Moorehead use the kinetic and messy ambience of indie filmmaking to tell a transcendent, romantic fable that also doubles as a delightful monster movie. Putting character first, both emerge as the two creepiest film experiences I had this year.

An energetic and invigorating exploration of the traps of art and commerce, Birdman connects in a way that Iñárritu’s previous films did not. There’s a playfulness and a passion in the one-take gimmick that draws the fraying edges of Michael Keaton’s Riggan Thompson together, and a previously absent wisdom in the way the marvelous supporting cast is used to populate the vibrating world that surrounds Birdman‘s harried actor. Much has been said about Keaton, and while it’s exciting to watch him stir to life, the film is nothing if not the sum of its parts, one of which is Emma Stone’s best performance to date. A beguiling treat that only grows with additional viewings, Birdman soars. The road ahead of Anna winds from the shielding walls of a convent to the wilderness of her previously unknown homestead, but Ida’s real journey is both spiritual and emotional, as much for the audience as the young protagonist . Pawlikowski, who established himself as a filmmaker to watch with My Summer of Love, takes his craft to another level altogether. The use of the black-and-white format is never a simple stylistic device, but an exploration of emotional history. Shadows and fog, movement and stillness, captured in starkly lovely compositions that delve into the national tragedy at the heart of Ida, making it one deeply personal to the central characters. There’s an austere patience and visual medievalism that recalls Ingmar Bergman, but Pawlikowski, the luminescent Agata Trzebuchowska as Anna / Ida and Agata Kulesza as her steely aunt, make Ida a ravishing original. Haunting and simultaneously redemptive, the film’s final shots are bitter-sweet, as they release us from such a captivating dream.

Speaking of Bergman, the spirit of the great director, and those of Chekhov and Tarkovsky, hovers watchfully over Nuri Bilge Ceylan’s latest Turkish epic. Following the long, winding, but endlessly rewarding Once Upon a Time in Anatolia, Ceylan has returned with another massive yet patient exploration of human virtue and frailty, tied inextricably to the rugged Anatolian countryside. Within this swirling snow-globe, he’s honed his craft to a much more accessible — and ultimately emotionally revealing — experience, revolving around some of the most illuminating visual portraiture we’ve seen onscreen. Some movies happen to feature conversations; Winter Sleep is chained to them. But that’s a gift, not a prison sentence. Even the craggy silence has something to say in a Ceylan film.

6. Under the Skin (Jonathan Glazer) Silence, and the malice or empathy it might imply, sit at the uneasy center of Under the Skin, this year’s finest science fiction film. There’s a lingering dread hanging over the gloomy Scottish countryside where Skin takes place, but the implied internal landscape of the imagery — Scarlet Johansson’s reluctant alien tooling around Glasgow, ensnaring men for who knows what — is even more fascinating than Glazer’s hypnotic and breathtaking images. Kubrick is bound to come up, but the comparisons are apt; Under the Skin may have sprung from a novel, but it’s really a fever-dream of all of the ideas that typically populate pulp science fiction, drained of their sensationalism and presented to us as truly and uniquely alien. Proving that her idiosyncratic performance as the OS in last year’s Her was no fluke, Johansson once again makes casual humanity look legitimately shocking when seen through the eyes of an outsider.

Damián Szifron launches a satirical and visceral dissection of the social and political currents running underneath his native Argentina, but Wild Tales is the opposite of a stuffy, calculated screed. Playing with a touch of the pulp ghoulishness of Tales of the Crypt, Tales features plenty of darkly comic surrealism that’s been subtly grafted onto modern social anxieties. Whether it’s a plane full of strangers learning of the demented connection that bonds them, a waitress at a road-side diner forced to serve the author of her family’s misery, or a demolitionist waging a war against an impound lot, Wild Tales finds a deeply entertaining catharsis in isolated fragments that begin as revenge, only to crossover to examine ideas about justice and human morality. Taken as separate stories, these vignettes are entrancing, but, most impressive for an anthology, when assembled they create a fearsome portrait of Argentina itself, one unlikely to fade from memory.

When a movie attempts to be ambitious, and when that ambition is of an original and challengingly technical nature, it can be very difficult to separate the success of the technique from the success of the film. So, yes, it’s an amazing achievement that Linklater’s Boyhood flows as the story of a young man growing up amidst a shifting home life, given that it was assembled over 12 years, as many of the actors were literally growing into adults. What’s more impressive, though, is that even that fluidity isn’t the quality that rises to the fore of Linklater’s accomplishment. This isn’t just an effective exercise; it’s every bit the emotional and artistic triumph that its team was swinging for when they embarked on this odyssey. Boyhood is one of the most entrancing and delicately assembled chronicles of a coming-of-age since Terrence Malick’s The Tree of Life — and, for this critic, that’s high praise indeed.

At a very basic level, Whiplash is the most entertaining and satisfying film of the year, and so much of that comes down to the improvisational and jazzy vibe that infects this battle of wills between would-be musical prodigy Miles Teller and J.K. Simmons’ overbearing, masochistic teacher. Chazelle knows his material, sees the obvious surface textures, and integrates his performers so perfectly into the setting that it’s often hard to dissect a certain scene and extract a certain portion for credit. Simmons is magnetic, but it’s down to how he’s playing off Teller — and vice versa — how each has been guided by the scripting, framed in the shot, and how they proceed to the next piece without seeing the orchestrated hand behind it. The final scene is simultaneously one of the most explosively giddy and angry, forceful things I’ve seen in a cinema all year. The moment that follows it is a triumphantly perfect final note, not least because it openly questions all that will come after it. It’s easy to deliver criticism towards Wes Anderson for playing in the same self-contained sandbox time and time again, but that’s a misreading of what this continually inventive director is really up to. Anderson’s stylized, quixotic universe keeps expanding with each film, and in new ways, that then later become a part of his acknowledged bag of tricks. Very rarely is the director actually resting on his laurels, and if Moonrise Kingdom felt like it was creeping into the realm of the personal, Grand Budapest takes that sensibility and grafts it onto a vantage point that’s more literate and historical, arriving at a brand-new place. Forget all of that, though, and you have the year’s best sensory pleasure; it’s an astonishing treat to look upon this specific place, and to live in the skin of these characters. It isn’t every great film that beckons us immediately to return to it, that we feel lost the moment we leave it, but Anderson’s Budapest is such a film. You feel forlorn checking out of it, clinging to such wonderful memories.

It might feature a skate-boarding, hijab-wearing bloodsucker, but A Girl Walks Home Alone at Night is much more than a hipster horror film. Set in a mythical landscape that feels like Quentin Tarantino and Tim Burton took a gig art-directing Iran, Girl establishes a raw and seductive edge that is also dreamy and wistful, enamored of Old Hollywood’s visual legacy, inspired by a rich independent heritage, and completely in love with its characters. Turning the tropes of Universal horror films on their head — one scene features a tawdry pimp discovering he’s the classic damsel in distress — Amirpour creates a wonderful character in Sheila Vand’s nosferatu. She’s not a monster, but a convergence of several cultural insecurities, wrapped in a feral, defiantly female shell. Crafted from the familiar, Girls’ best feature is just how fearsomely original and confident it feels. Eraserhead and Bride of Frankenstein have new, welcome company in the annals of filmdom.