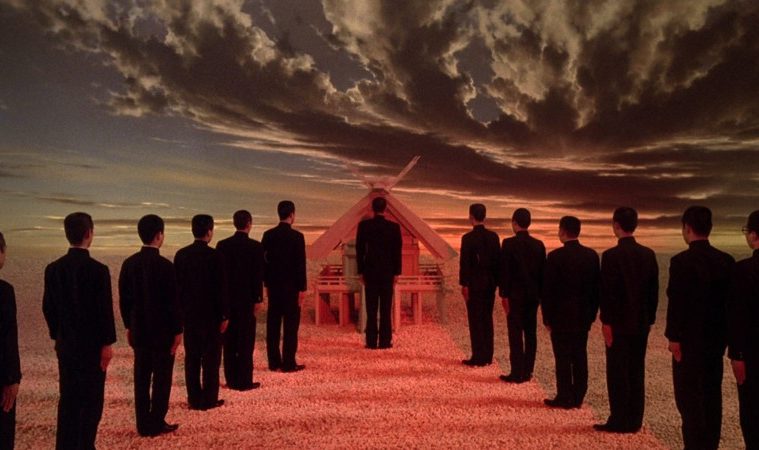 More than a few foreign filmmaker have tried relocating to Hollywood, but it’s less often the case that an acclaimed Hollywood artist takes their talents overseas. Paul Schrader, at the height of his post-Taxi Driver, post-Raging Bull success, proved a notable example. In the mid-1980s, he took an opportunity to capitalize on his longstanding fascination with Japan by directing an entire film with an all-Japanese cast and script, his sister-in-law Chieko Schrader serving as linguistic and artistic interpreter. Its subject: Yukio Mishima, a controversial figure whose death so deeply shocked Japan that the film, Mishima: A Life in Four Chapters, remains banned there. Now — in the U.S. at least — the Criterion Collection is giving the film Schrader considers his finest directorial achievement a new 4K transfer and Blu-ray release.

Mishima, portrayed by Ken Ogata, was one of Japan’s most internationally acclaimed authors, and likely the country’s most infamous suicide. In 1970, after a successful career in poetry, fiction, non-fiction, theater, and film that spanned over two decades, he and four young disciples of his right-wing militant organization staged a failed coup at the military Camp Ichigaya, the man then committing seppuku — ritual suicide by blade — under the dumbstruck eyes of the army and media. With no demands met and no casualties inflicted except himself and his closest confidant, Mishima’s lethal demonstration was less terrorism than performance art — the culminating expression, argues A Life in Four Chapters, of personal philosophies a whole lifetime in the making.

Schrader’s film, miming Mishima’s lifelong fascination with the theater, is patterned around the Kishōtenketsu four-act structure of Japanese drama — the “four chapters” of its story. Its narrative intercuts between three stylistically distinct “modes”: the framing plot of Mishima’s last day, shot in a conventional realist style; Ozu-flavored black-and-white flashbacks to Mishima’s childhood and developing career; and dramatizations of illustrative scenes from Mishima’s fiction, staged on surreal pseudo-theatrical sets shot in vivid, saturated colors. Phillip Glass’ score, a combination of dreamlike synths, romantic strings, and militant percussion, remains constant throughout. These interpretations of his art, Schrader suggests, may help shed light on the author’s complicated persona and tumultuous inner life; Criterion’s HD transfer is a godsend in this regard, highlighting the subtle differences in light, color, and framing that distinguish the film’s three modes.

Taken altogether, Mishima is a phantasmagoria of Cartesian dissociation, following Mishima’s tortured observation that “words” and “reality” exist in irreconcilable universes. Mishima, obsessed with a transcendental notion of “beauty,” is perpetually haunted by the gulf between his ideals, his body, and the masks (metaphorical and literal) he dons for the world. As a scrawny, sheltered youth, he dreams of fighting and dying gloriously in World War II; yet when reporting for the draft, he exaggerates his own physical frailty and is deemed unfit for military service. As a successful writer, he struggles with his semi-private homosexuality while succumbing to the allure of a fascist ideology that promises to restore the masculine virility of Imperial Japan. As a political activist, he dreams of inciting a revolution, yet only inspires public mockery.

It’s tempting to center Mishima’s story on his lifelong struggle with gender expression and sexual identity, or on the psychologically abusive upbringing that would arguably produce many of the themes and fixations that recur in his life and work. (Not prominently touched upon is the relationship with his dictatorial father, nor the strained marriage to the mother of his children while living a secretive second life as a gay man.) But while Mishima doesn’t exactly downplay these themes, Schrader’s interests are characteristically more metaphysical. Like Travis Bickle or any number of other Schraderian antiheroes, he’s driven by a sense of longing teetering on the extreme precipice between earthly and spiritual: he longs for a synthesis of “beauty” and “action,” a completion of his very being, an absolution he becomes convinced is attainable only in the catharsis of death. A craving for perfect beauty — or perhaps merely a sense of belonging — and frustration at its transience eventually fuels a morbid doctrine of self-actualization through violence that leads him on a collision course with his ultimate fate. For Mishima, life climaxed in the intersection of art, fascism, eroticism, and suicide.

While Mishima sidesteps both the melodramatic bluntness and misplaced notions of journalism that sink many biopics, the film also never quite sparks dramatically to the extent of Schrader’s most exemplary work. Ken Ogata offers a thoughtful, stoic performance, but a jumbled chronology, constantly shifting cast, and relentlessly interior scope rob him of the opportunity to exhibit Robert De Niro or Ethan Hawke’s depth, range, and dynamism, leaving instead a distant and muted impression in contrast to those actors’ vivid icons of angry, alienated men. Schrader, an artist of more prosaic temperament, also doesn’t offer the kind of rhythmic, personality-driven eclecticism in imagery and editing that make Martin Scorsese’s interpretations of his work incendiary, or that might fully recreate the sensations of Mishima’s own wordcraft. While it’s more intellectual character study than transportive drama, as opposed to both, it remains an intriguing specimen of cross-cultural collaborative art, and a haunting portrait of one of the last century’s most eccentric literary figures.

Mishima: A Life in Four Chapters is now available on the Criterion Collection.