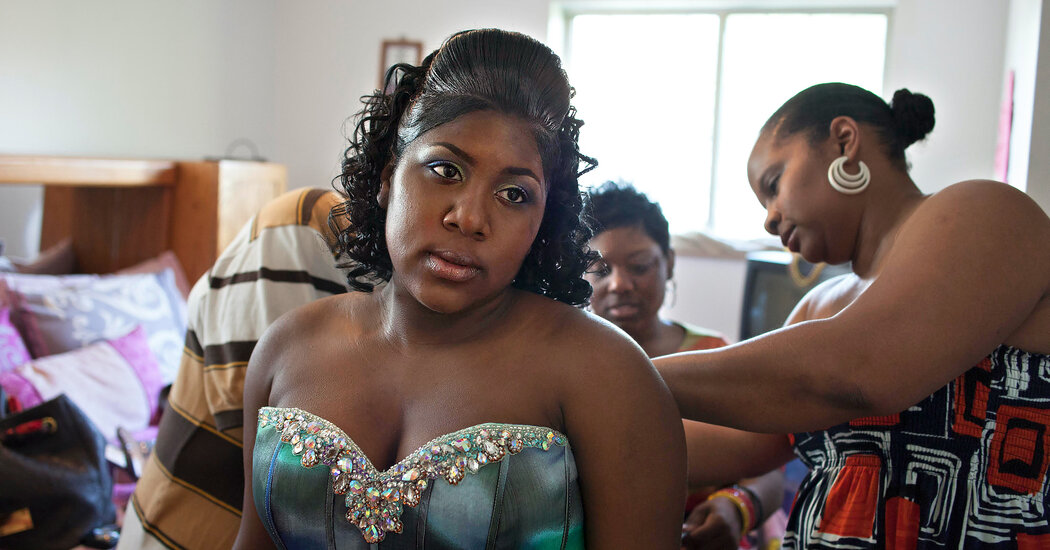 There’s a moment in Midnight in Paris that strikes because of its simple beauty and melancholy. The seniors of Flint Northern High School’s Class of 2012 made it! They are in the midst of the prom referenced in the film’s title, and are dancing their cares away to Kelly Rowland’s “Motivation.” While the boys bring out their best sexy moves, the girls mostly roll their eyes as they demand to be treated like the queens they are. One of them indifferently eats cotton candy as the camera pans by; she has earned this.

Of course, only one girl gets to be prom queen and the boys’ night turns out to be less eventful than they planned, but neither are the focus of Roni Moore and James Blagden’s sensitive documentary. Instead, the filmmakers capture a snapshot of the joy in a community that would soon be known for its dehumanizing water crisis. “There is still no drinking water in Flint” has become one of the most well-known phrases in America today. It’s uttered mid-speech by celebrities during awards ceremonies and was often seen in banners during the protests demanding social change effective immediately, which characterized the volatile summer of 2020.

That the problem has remained unsolved isn’t the focus of the film either. At times one does wonder if the documentary indeed has an identifiable focus, but one gets the sense that the filmmakers simply allowed the subjects to shape the dynamic of the story. We’re accustomed to the idea of filmmakers extracting stories out of their subjects, shaping them to promote specific messages or points of view. What the filmmakers of Midnight in Paris seemed to have encountered instead was pure and simple humanity. How do they give shape to a story, when the community they’re filming can offer millions?

The camera then becomes witness to the five days leading to the prom. The water crisis hadn’t come into full effect, but even then, the students are surprised that someone’s covering their town in a way that has nothing to do with the bad things coming out of there. Perhaps pre-dating, but rightfully showcasing the way in which teenagers became absolutely at ease doing the camera confessionals that populate Twitter and TikTok today, the students in the film talk to the camera, and to us, with utmost sincerity.

Midnight in Paris is an example of what happens when the camera can’t help but surrender to its subjects. Early on in the film, young Maurquisha Lever sits next to her father on the living room couch. As the father waxes rhapsodically about his daughter, she remains silent, staring at the camera, only nodding in a “Dad, you’re embarrassing me”-way once. They sit in a handsomely furnished room (the film displays socioeconomic differences without making a show out of it) and when Maurquisha eventually shows the filmmakers around the house, it has less the feel of an extravagant MTV Cribs’ episode, and more the subtext of a great novel. The young woman refers to her room as “the room.” Will high school graduation allow her the freedom to create a home to call her own?

At the film’s end, we aren’t told what happened to the students we met. We’re also never told what their names are through titles of any form. We’re supposed to be paying attention at a human level, not studying and analyzing the young men and women as if we’re going to be quizzed later on.

This approach almost seeming to be without an intention hinders the film only in what we’ve learned to expect from nonfiction, and the unconscious bias we carry when we see specific kinds of subjects. The filmmakers cleverly enough make use of extremely cinematic formalism (if you don’t count editing for contrast, of course) only once, during a quick cut to a previous scene. The cut highlights the passage of time and is the one moment where the filmmakers shatter the illusion of this being “real life.” What makes the moment worthy is the look in the face of the subject they photographed. We don’t need to know where they are now to hope this essence has remained the same: a look of determination and the dream of beauty to come.

Midnight in Paris is now playing virtually at Metrograph.