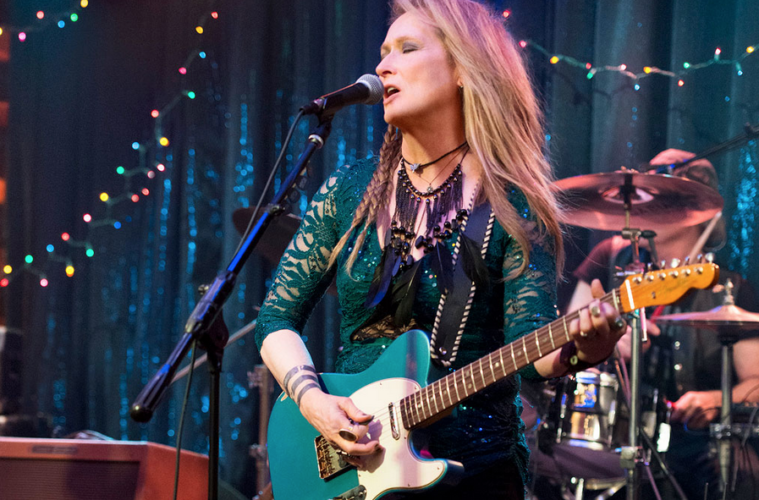 While it may not crop up on many summer movie previews, we certainly made room for the return of Jonathan Demme. His first studio drama in some time, Ricki and the Flash follows Meryl Streep as a guitar heroine who is picking up the pieces of her life as she reunites with her family. Ahead of an August release, today now brings the first trailer thanks to Sony.

“Terry is a grandmother of six and she’s still up there rocking out every weekend, walking on the bar, just electrifying the audience,” writer Diablo Cody tells Yahoo, speaking about the real-life inspiration of her mother-in-law. “Rock ‘n’ roll is her life.I think there’ve been people in her life who’ve thought it was kind of a silly thing for a mom or grandmother to do and she doesn’t give a damn. I love that about her.” Also starring Kevin Kline, Mamie Gummer, Audra McDonald, Sebastian Stan and Rick Springfield himself, check out the trailer and poster below.

Meryl Streep takes on a whole new gig – a hard-rocking singer/guitarist – for Oscar®-winning director Jonathan Demme and Academy Award®-winning screenwriter Diablo Cody in Ricki and the Flash. In an original and electrifying film loaded with live musical performances, Streep stars as Ricki Rendazzo, a guitar heroine who made a world of mistakes as she followed her dreams of rock-and-roll stardom. Returning home, Ricki gets a shot at redemption and a chance to make things right as she faces the music with her family. Streep stars opposite her real-life daughter Mamie Gummer; Rick Springfield, portraying a Flash member in love with Ricki; Kevin Kline as Ricki’s ex-husband; and Audra McDonald as Kline’s new wife.

Ricki and the Flash opens on August 7th.