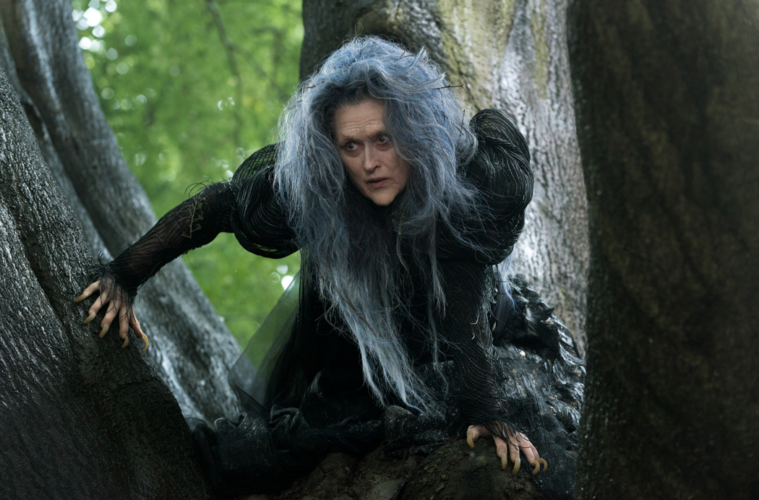 From Chicago to Nine, Rob Marshall has always been one for lavish productions and varied, extensive ensembles, but it looks like he’ll be outdoing himself for his next effort. His adaptation of James Lapine and Stephen Sondheim‘s Into the Woods has just kicked off production in the U.K. and our first official look has now arrived.

Above, one can see Meryl Streep as the Witch, looking fairly spot-on, including those repulsive finger-nails. While this could easily turn into a scattered, overblown affair, it already looks to have more life in it than Marshall’s last effort, On Stranger Tides. We’ll let Walt Disney themselves explain everyone’s role below and check out the first photos in the post via Alec Gideon and Disney, which also feature Chris Pine, Emily Blunt and Anna Kendrick on set.

· Meryl Streep portrays the Witch who wishes to reverse a curse so that her beauty may be restored.
· Emily Blunt is the Baker’s Wife, a childless woman who longs to be a mother.
· James Corden plays the role of the Baker, a hard-working man who desperately wants to start a family.
· Anna Kendrick fills the shoes of Cinderella, who finds herself on a journey of self-discovery.
· Chris Pine portrays Cinderella’s Prince, charming and impossibly handsome, who is on an endless quest to find his bride.
· Johnny Depp steps in as the Wolf, who sets his sights on Little Red Riding Hood.
· Lilla Crawford (Broadway’s “Annie”) makes her feature-film debut as Little Red Riding Hood, a smart and spunky girl who journeys into the woods, finding unexpected adventures along the way.
· Daniel Huttlestone lands the role of Jack, an absentminded and adventurous boy who trades his treasured cow for five magic beans.
· Tracey Ullman joins the cast as Jack’s Mother, a poor and exasperated mom who is overwhelmed, yet fiercely protective of her son.
· Christine Baranski takes on the infamous Stepmother who wishes for riches and grandeur; she’ll do anything to marry off one of her daughters to a prince.
· MacKenzie Mauzy plays Rapunzel, a sheltered young woman who experiences the world beyond her tower for the first time.
· Billy Magnussen is the dashing and eager Prince who courts Rapunzel.