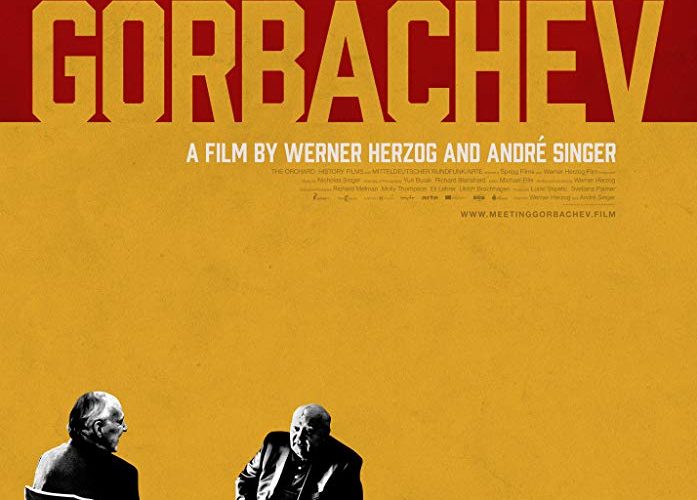 In Werner Herzog’s 2011 documentary Into the Abyss, the irrepressible German master-turned-Hollywood-adventurer prefaces a series of interviews with two death row inmates, their families, their jailers, and the victims of their multiple murders, by offering an unsolicited point-blank confession to his primary subjects: that he does not sympathize with their predicament, that he will never downplay the severity of their crimes, and that he does not morally condone capital punishment under any circumstances. Then, without missing a beat, he begins asking them intimate, open-ended personal questions. It’s a whopping juxtaposition that highlights the absolute best and bravest qualities of Herzog’s voice as a documentarian: driven by an insatiable curiosity and empathy for human experience, yet uncompromised by the editorial traps of narrative simplification or moral relativism.

Herzog’s Meeting Gorbachev, a profile of the Soviet Union’s final figurehead co-directed by André Singer and featuring extensive original interviews with the then-87-year-old ex-president himself, seems to kick off with a note of similar moral ambivalence. When Herzog asks the aged Gorbachev what he thinks of the German people in light of the two nations’ past century of hostile relations, Gorbachev pauses before offering a sentimental, bordering on trite, anecdote about the friendly German bakery in the rural town where he grew up. “Months later,” Herzog’s familiar, grave voiceover intones, the filmmaker pondered whether Gorbachev had merely shared this story as an attempt to placate him, but concluded that “everything about [Gorbachev] was sincere.” This admission–that Gorbachev’s formidable charisma, still evident in his old age, so overwhelmed the filmmaker’s skepticism as to stop short any critical reading of his motives–effectively summarizes the ensuing 90 minutes, which start as an attempt to profile the kind of tragic figure familiar to Herzog lore before pivoting into something of an awkward, uncritical pat on the back for the former communist juggernaut.

As the film gets down to explaining Gorbachev’s origins and rise to power, it’s not hard to see the angle of classic Herzogian narrative being built up. In Herzog’s telling, buffered by archival materials, serene steady-pan location shots and (of course) his own colorful narration, Gorbachev was–like a certain filmmaker–once young, restless and possessed, a brilliant student with a workaholic demeanor and an insatiable curiosity about other people and the world. Tracking this kindred spirit’s rise from humble peasantry to the halls of the Kremlin, Herzog stumbles on some trademark moments of dark surrealism in excavated rare footage to suggest that the future Premier’s dreams of a world waiting for universal peace through communism may not have been quite in line with the reality of his predecessors. In the film’s most striking sequence, recalling the black comic decadence of Armando Ianucci’s Death of Stalin, we charge deliriously in time through the unnaturally rapid succession of geriatric heads-of-state linking Brezhnev to Gorbachev, propped up by laughable attempts to hide the ailing old men’s unfitness to lead (striking live-sound footage shows a visibly disoriented Brezhnev bungling an honors presentation for Gorbachev) and punctuated by a series of near-identical pompous state funerals.

Herzog takes great pleasure in highlighting the absurdity of it all, in case it weren’t self-evident, but once Gorbachev ascends to the highest seat of power the tone starts to pivot. The bleak absurdism of the system which gave Gorbachev his authority–that is, one of the most repressive and bloodsoaked imperial powers of the 20th century–gradually gives way, more and more uncritically, to a narrative of Gorbachev’s own impassioned idealism. Whereas the film seemed poised to cast Gorbachev as an oblivious quixotic figure amidst a gruesome political reality, the more Herzog hears his inspiring, sagely imparted rhetoric of nuclear disarmament and transnational unity and world peace, the less the film seems able to detach itself from Gorbachev’s perspective on Gorbachev. When Gorbachev takes credit for the warming of relations with the West, the withdrawal of Soviet troops from Afghanistan, the collapse of the Iron Curtain, the reunification of Germany (clearly the issue of primary emotional interest for Herzog), and even the end of the Cold War itself, Herzog asks the film’s small assortment of talking heads leading questions to get them to endorse Gorbachev’s version of events. When Gorbachev insists that the end of the Cold War was not a loss for Russia, but “a victory for the world”–despite declaring the dissolution of the USSR’s imperial hegemony “a tragedy” several scenes later–Herzog doesn’t question the logic. When Gorbachev vehemently disavows any personal knowledge or complicity in Russia’s infamously destructive mishandling of the Cheronobyl disaster, it’s never brought up again.

Whereas the film begins on an ambiguously, tenuously sentimental note, it ends on an unabashed one, as Herzog poetically dwells on Gorbachev’s warm family life and tender mourning for his late wife. Quixotic subjects are hardly new for Herzog, but he extends Gorbachev an unabashed, unironic sympathy and love–literally, he stands up at one point and declares “I love you,” thanking him for the abolishment of the Berlin Wall–that he never offered the likes of say, kooky, ill-fated grizzly-bear-hugging hippie Timothy Treadwell. The notion that Gorbachev’s idealistic character may have been fundamentally at odds with the office he wielded and the institutions he served is never seriously suggested by either man.

Another even more sobering possibility is all-too-briefly mentioned in the film and never consciously revisited. Recalling an episode early in his career, Gorbachev muses that a senior colleague in the halls of Soviet government once angrily warned that his reformist passions and taste for appeasement would see the USSR crumble around him if he were in charge. That this is exactly what happened is not noted by either party as a point of profound or even noteworthy irony. When it comes to discussing the failures and eventual dissolution of his regime and the Soviet Union at large (with their barely-mentioned, catastrophic consequences of bloody civil war and rising autocratic regimes throughout Eurasia to this day) Gorbachev lays the blame squarely at the feet of backstabbing comrades and warmongering Western leaders, and Herzog gladly echoes him. Neither man dares suggest the ugly possibility that his blind idealism didn’t just him merely a tragic leader, but a weak one. In a rare moment of open self-criticism, Gorbachev ponders that he was perhaps “too soft” on those traitorous countrymen who rallied to unseat him; that he ought to have had them “sent away.” It’s the lone sobering, tantalizing, self-aware peek into the savage realpolitik lurking beneath his noble words.

Meeting Gorbachev played at Tribeca Film Festival and is now in theaters.