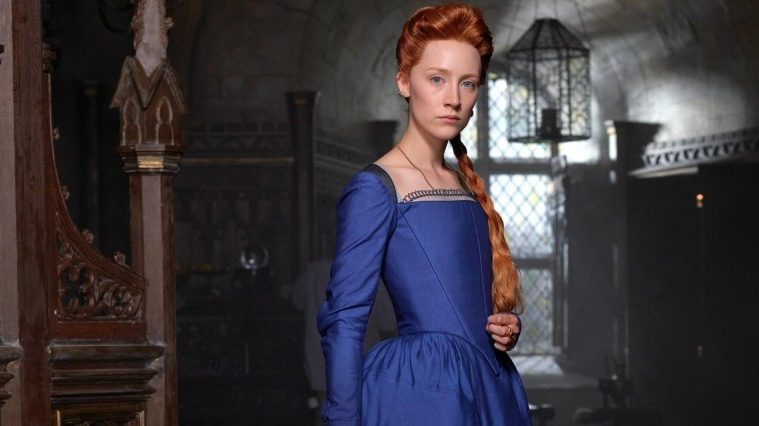 Coming off the heels of her third Oscar nomination for Lady Bird, Saoirse Ronan is trading in her Catholic school uniform for a corset in Mary Queen of Scots. In acclaimed theater director Josie Rourke’s directorial debut, Ronan plays the real-life queen of Scotland, while fellow Oscar nominee from last year, Margot Robbie (I, Tonya), takes on the role of Mary’s cousin and nemesis Queen Elizabeth I.

Mary Queen of Scots is penned by House of Cards creator Beau Williamon, and if his hit Netflix TV show, now entering its final season, gives any indication of what Mary Queen of Scots will be like, expect lots of sex, political power play, and intrigue. Also starring Jack Lowden, Joe Alwyn, Gemma Chan, Martin Compston, Ismael Cordova, Brendan Coyle, Ian Hart, Adrian Lester, James McArdle, with David Tennant, and Guy Pearce, Focus Features will be releasing the film on December 7th, and one can see the first trailer below along with a pair of character posters.

“Mary Queen of Scots” explores the turbulent life of the charismatic Mary Stuart (Ronan). Queen of France at 16 and widowed at 18, Mary defies pressure to remarry. Instead, she returns to her native Scotland to reclaim her rightful throne. But Scotland and England fall under the rule of the compelling Elizabeth I (Robbie). Each young Queen beholds her “sister” in fear and fascination. Rivals in power and in love, and female regents in a masculine world, the two must decide how to play the game of marriage versus independence. Determined to rule as much more than a figurehead, Mary asserts her claim to the English throne, threatening Elizabeth’s sovereignty. Betrayal, rebellion, and conspiracies within each court imperil both thrones – and change the course of history.