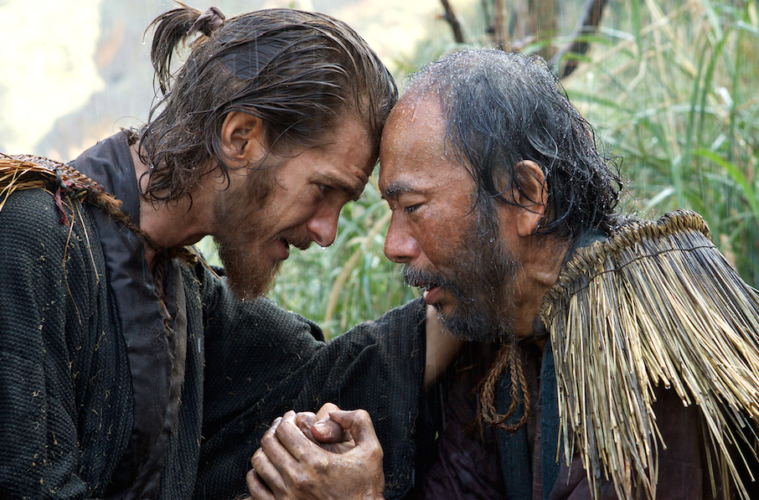 While we thought it could sneak into the end of the 2015 calendar, it looks like Paramount is holding off a release of Martin Scorsese‘s priest drama Silence until after its rumored Cannes premiere. As we wait for the first trailer, today brings a few updates on the adaptation of Shûsaku Endô‘s novel, which follows Andrew Garfield as Father Rodrigues, a 17th-century Portuguese Jesuit who travels to Japan with a fellow priest amid rumors that Rodrigues’ mentor has abandoned the Church.

Ahead of the film’s release, earlier this year Approaching Silence was published (pick it up here), a novel which features a collection of essays looking back at the real-life background of Endô’s work. Perhaps most intriguing to our audience, it also features an afterword from Scorsese in which he describes bringing to life what “can’t be seen or described or named.” He references the “astonishing sensorial experience” of 2001: A Space Odyssey and in the “monumental” documentary Shoah, “we can’t know the horrors of the death camps, we can only conjure them.” Relating this feeling to Silence, he had this to say:

Endô’s novel confronts the mystery of Christian faith, and by extension the mystery of faith itself. Rodrigues learns, one painful step at a time, that God’s love is more mysterious than he knows, that He leaves much more to the ways of men than we realize, and that He is always present … even in His silence. What role am I playing, wonders Rodrigues? Why am I being kept alive? When will my martyrdom arrive? Of course, it doesn’t. Which means that he will be playing a role that is very different from the one he expected to play. He will not be following in the footsteps of Jesus. He will be taking a less revered path, and therefore playing a very different role. This is the most painful realization of all.

How do I translate the last pages of the novel, as abstract as Moby-Dick or The idiot, into images and actions? So how do I film these interior sensations and realizations and emotions? How do I make the mystery of faith, and the ways of God, cinematically present? The answer is in making the movie — going to Taiwan, working with the actors and the cameraman and the production designer, shooting, and then putting it together in the editing room, adding a frame here and taking one out there, mixing the sound, timing the color, and deciding that it’s finished. But on another level, that answer lies within the cinema itself, and its way of pointing us toward what we cannot see.

As a preview to the film, Scorsese was invited by the 39th Sao Paulo International Film Festival to help design their official poster as they are honoring the 25th Anniversary of The Film Foundation. He offered up a storyboard for a “crucial” scene in the film, which seems to find Garfield’s character in danger. Scorsese also mentioned his foundation is restoring James Whale‘s The Road Back, Marcel Ophüls‘ The Memory of Justice and Ernst Lubitsch‘s Mary Pickford-led silent dram Rosita, which was thought to be lost forever. So, as we look forward to those — and Silence — check out the storyboard below.