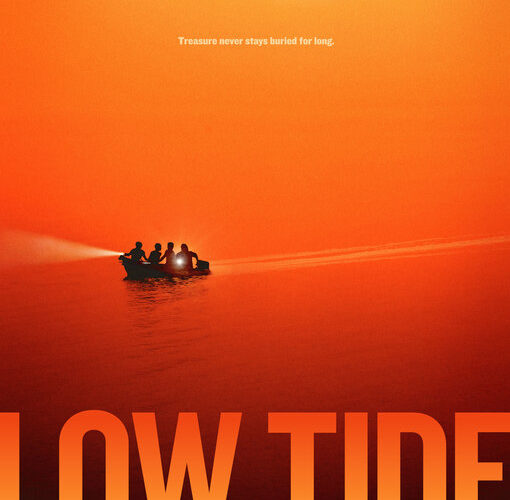 Just because writer/director Kevin McMullin’s debut feature Low Tide centers on a trio of locals stuck in a New Jersey banks vacation town and forced to watch rich kids come every summer to treat them like one of the attractions with which to entertain themselves doesn’t mean it’s an “us versus them” story. Alan (Keean Johnson), Smitty (Daniel Zolghadri), and Red (Alex Neustaedter) seek to make it one by breaking into empty houses while their owners are having fun on the boardwalk, but reality soon shows how these teens aren’t created equal. While Smitty lives in a trailer with his grandma and Alan in a rundown home watching his brother Peter (Jaeden Martell) because Dad’s gone on a fishing boat for weeks, Red wants for nothing.

Well, that’s not completely true since he obviously wants for attention when his status as the richest kid in town is proven meaningless upon the tourists’ arrival. These few months every year render him powerless and thus push him to act out—often to the detriment of the community he feels he must remind about his superiority. As such, Sergeant Kent (Shea Whigham) keeps his focus firmly on Red in the hopes of putting him behind bars to both protect the neighborhood and smugly knock the boy’s father down a peg for thinking he owns the place. That’s hard to do when everyone is too scared to cross the family and help, though. Good luck enlisting Alan or Smitty since being Red’s friends and confidants has its benefits.

Eventually, Red will show his true colors and reveal how he’s always been motivated by self-preservation and self-fulfillment. He will save himself and laugh as one of his patsies gets hurt or takes the fall. He’ll search for any sign of betrayal and not blink an eye as far as paying it back. And these boys walk willingly into his web because he can charismatically take them under his wing and treat them like brothers. It’s how he cajoles Alan into getting Peter on-board to join them for a robbery while Smitty is out of commission with a broken ankle. It’s how he wines and dines the youngster with alcohol, drugs, and recognition to agree. You feel safe with Red if only because the knife is pointed elsewhere.

We have to imagine they’ve always known their friend was a bad egg, but there’s nothing like a sniff at escape to make the truth harder to ignore. The first sign of happiness for Alan is the smile of a tourist (Kristine Froseth’s Mary) who sees him as more than his surroundings. Then comes the discovery of a bag of gold coins at a burglary gone wrong. Suddenly a future career on the water with dad becomes clouded over by a chance at having money and someone to love. For once in his life, Alan had a reason to be smart and stop enjoying Red’s fun and games. Since that appeal also has a tendency of making people sloppy, however, his actions turn Red’s paranoia into full-blown rage.

The result is an effective if familiar thriller wherein everyone begins to act according to his own self-interest. Kent gets his hooks in the boys to make them think about turning traitor, Smitty seeks whatever angle keeps him breathing, and Alan begins to recognize his only chance at freedom is to step out from Red’s shadow. Enter backstabbing, secrets, and hidden agendas to keep each boy on his toes while those who believe they’re in control prove far from it. There’s not much going on for any of these four characters to become something more than their surface appearance allows (Smitty the weasel, Alan the dope, Peter the brains, and Red the brawn), but there is comfort in acknowledging this predictability. Sometimes that understanding increases suspense.

Anticipating what they will do means knowing what’s coming, but not necessarily when. So rather than shoot himself in the foot, McMullin actually leans into these certainties to render their aftermaths the focal point. We know Smitty is going to turn rat as often as suits him, but we also know Red knows this. We know Alan will do something that can expose what he and Peter have taken, but we also know the latter will have a plan to protect them from that fact. What then happens once everything plays out? How far will Red go to exit on top and how bold will the others be to match his bully’s determination and stand-up to him once and for all? Can they conquer their fear?

Low Tide isn’t groundbreaking or unique, but it knows its setting and characters enough to make the journey authentic despite its lack of surprises. Red is the bad guy and Alan the confused protagonist unsure of whether to join in or emancipate himself. They know the other’s capabilities and count on that awareness to provide them an upper hand. We know, however, that the only real advantage any of them can hope for is trust in another. Maybe Red can count on Smitty if the circumstances are beneficial, but Alan can definitely have faith in Peter. Will the latter duo win out in the end? It doesn’t take a genius to presume. Thankfully McMullin knows to keep things bittersweet regardless since life’s victories are never without a cost.