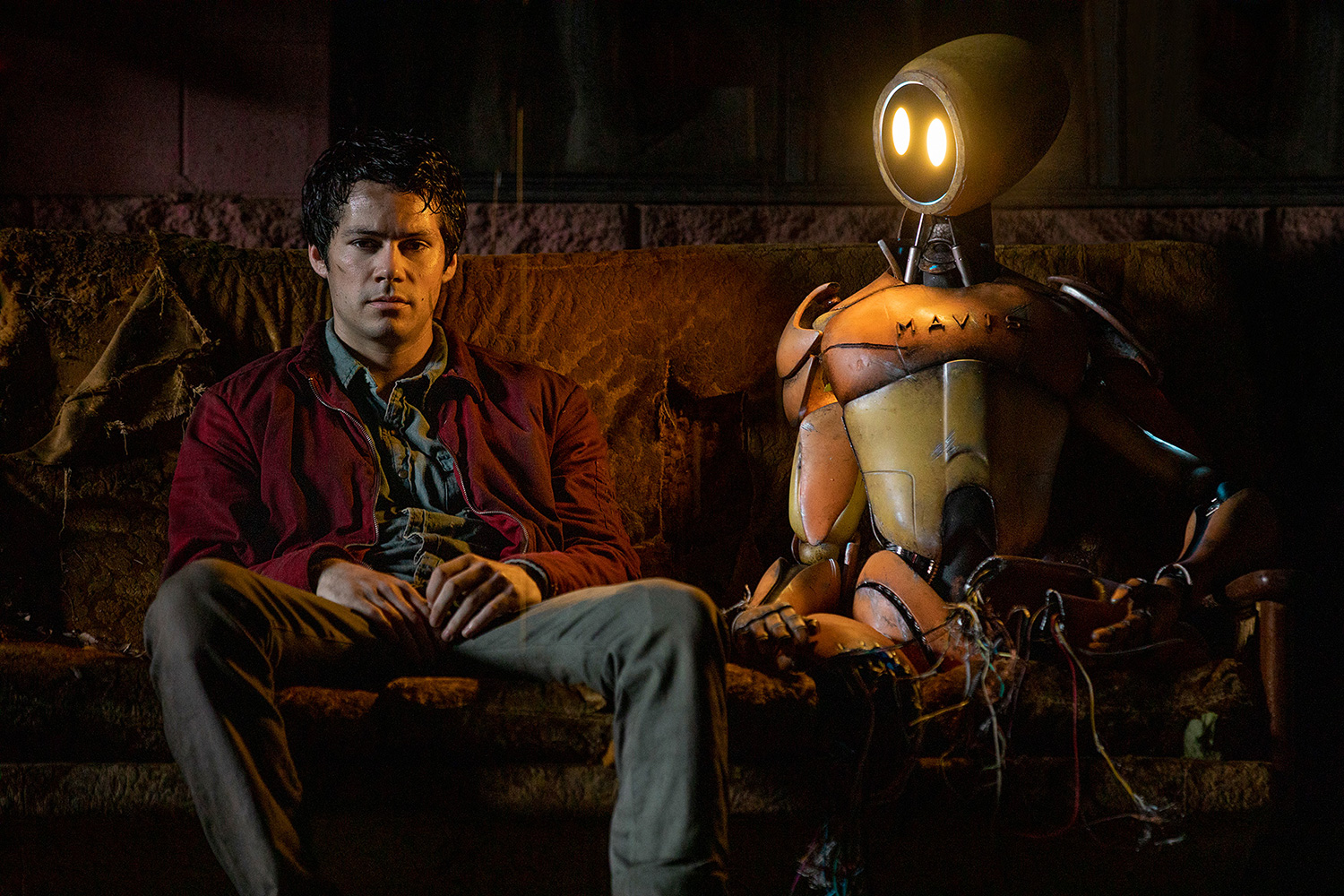 We’re seven years past the apocalypse. Eight years since the world banded together to send every nuclear missile on Earth into the sky to stop an asteroid hell-bent on destroying all life. Things obviously didn’t work out too well if the latter wasn’t able to stop the former. Ends up that that much radioactivity falling back down through the atmosphere was just as cataclysmic—killing off a lot of the population and mutating cold-blooded animals/insects into giant monsters that ultimately killed the rest. Ninety-five percent of humanity was wiped out when all was said and done with the remaining five doing what they could to survive in underground bunkers. So any hope of seeing someone outside your colony starts with braving a suicide run few could ever survive.

And by “few” I mean definitely not Joel Dawson (Dylan O’Brien). At least not on first glance. He’s pretty much a 24-year-old puppy everyone thinks is adorable because he’s never quite gotten over the crippling anxiety and fear that freezes his entire body at the sight of the creatures roaming the surface. While the “warriors” go on hunting parties to acquire food and supplies, he stays back fixing the radio, making minestrone, and milking their cow Gertie. It was a life he appreciated being that the others in the bunker had become his new family, but they all had someone to love within that community too. Joel hadn’t seen his high school sweetheart Aimee (Jessica Henwick) since their hometown was evacuated. Turns out she wasn’t that far.

This revelation is where we enter Michael Matthews’ Love and Monsters. Screenwriters Brian Duffield and Matthew Robinson provide the overview of how things got to this point with O’Brien’s humorous narration accompanied by Joel’s drawings to give life to his memories. We eventually see his and Aimee’s parting too: a heartfelt goodbye that conjured their first “I love you” alongside a promise to find each other. Joel made good on that deal by scouring the radio waves for years only to discover she was about eighty-five miles west from his hideout, on the shores of the Pacific. If not for a recent tragedy that made his compatriots question the security of their bunker, Joel probably wouldn’t have thought about leaving. If death was inevitable, though, why not try?

The thought of seeing Aimee again has been the only thing keeping Joel going. This is a young adult film after all. He’s therefore operating on impulse after going stir crazy underground. He knows he can barely shoot a crossbow let alone hit a target, but this mission has given him purpose to try nonetheless. Does he stop to ask if she still feels the same about him before leaving? Of course not. This idea of a grand romantic gesture is the one thing preventing him from being unable to move. It’s enough to forget about the dangers and perhaps even enough to forget about the past. There is a reason for his psychological hang-ups and reclaiming a piece of home in this wasteland might help spark healing.

His road there won’t be easy, though. Joel will have to outrun gigantic amphibians, escape the nest of burrowing worms, and learn exactly what it’s going to take to not die the moment he leaves whatever shelter he hopes is safe enough to protect him through the night. Thanks to some good luck, he will serendipitously find assistance from a canine friend named Boy and a pair of fellow travelers seeking utopia up north in the mountains. Clyde (Michael Rooker) and Minnow (Ariana Greenblatt) are the perfect contrast to Joel’s tentative nature and utter cluelessness about what to expect. They “train” him (for lack of a better word) in hopes of recruiting him to their team, but he’s determined to ensure nothing distracts him from Aimee.

Michael Matthews is the filmmaker behind an underrated gem from a couple of years ago entitled Five Fingers for Marseilles. It’s quite the leap from that South African western to a modestly budgeted studio picture like this, but there are definite thematic parallels that allow it to make sense. Despite his debut being an adult drama, it does also deal with an event from the past impacting choices in the present. You can see a lot of similarities in the psychological motivations of these characters as a result since both casts are forced to reconcile who they were then and who they are now. This process allows us to watch Joel grow-up virtually overnight. Either he lives in the present or he perishes.

O’Brien has a knack for injecting comedy into such harrowing circumstances populated by monsters with a desire to eat him. While his rapport with Rooker and Greenblatt make their brief time together the most memorable thanks in part to his Joel learning the ropes so we can too, he’s also believable as far as finding the ingenuity and courage to survive long odds. Add some heartstring tugs when he can no longer avoid the sorrow and guilt of which he’s been unable to let go and Love and Monsters proves itself a pretty well-rounded adventure for both its target audience and those older looking for a bit of escape that’s still firmly rooted in reality. Joel is an unlikely hero whose success shows humanity isn’t dead yet.

The special effects are effectively rendered and nicely integrated with multiple sparring sessions between monsters and humans. Like most stories of this type, however, the real villain to watch for is generally another human utilizing the uncertainty of such carnage as a smokescreen from ulterior motives. The filmmakers do well to ensure nothing seen or heard is superfluous in this regard. So while Joel draws a guidebook depicting the creatures he’s encountered in order to distract himself, what he observes will always come in handy. So too does his compassionate heart and empathetic spirit once dreams are dashed and happily-ever-afters proven little more than fairy tales. That’s because living isn’t about being strong or smart. It’s about having the ability to bounce back, learn from mistakes, and evolve.

Love and Monsters is now in limited release and available on VOD and Digital HD.