Not Okay Review: Zoey Deutch is a Parasitic Influencer in Dark Satire 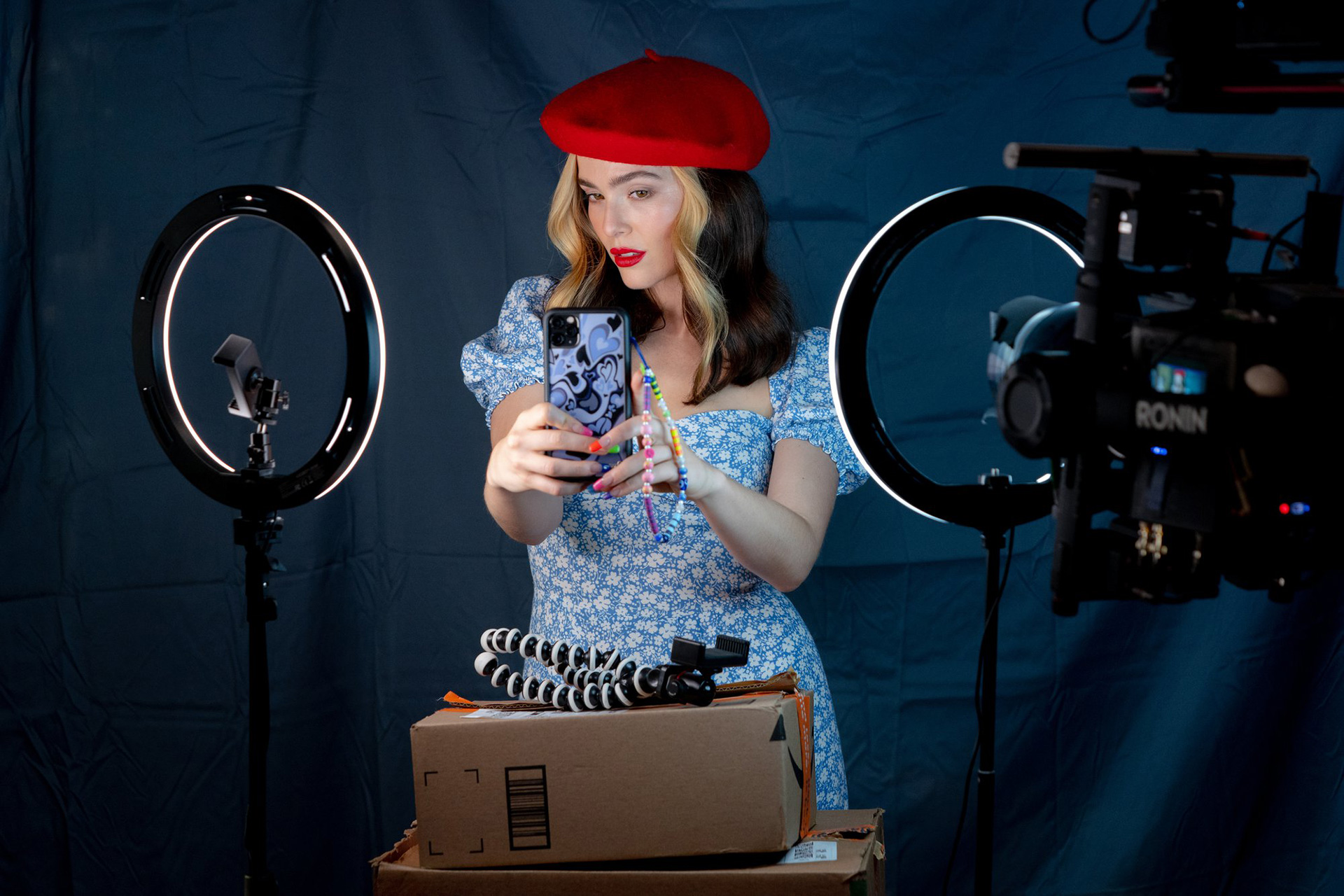 I’m not saying you couldn’t want to pivot careers from photo-compositor to writer, but to make it seem like a) the former is just a matter of loosely using the lasso tool in Photoshop to make a perfect mask that’s good enough to fool the world and b) it’s a stepping-stone job shunted to the corner and treated like an internship because “anyone can do it” put me in a bad mood right away. I get it, though. Writer-director Quinn Shephard needs her abhorrent lead character Danni Sanders (Zoey Deutch) to have both skills for Not Okay to work. (There was a “content warning” before my screener that highlighted an “unlikeable female protagonist,” as if those three words were akin to graphic violence.) Narrative first; authenticity who?

Whatever helps make the point is fair game in a satire, I guess. And when we’re introduced to Danni’s writing through an unsolicited op-ed about her depression being triggered by missing out on the 9/11 “experience” due to her parents taking her on a cruise that week, you realize the difficulty of careers wielded as props is hardly on Shephard’s mind. If letting Danni’s affluent white woman entitlement (of which the character considers “ambition”) means dabbling with whatever resources are necessary to become a social media influencer like co-worker Colin (Dylan O’Brien pushing against his usual typecasting by embracing AAVE appropriation despite his white-bred Mainer package), so be it. She can’t feasibly pretend she’s in Paris on a writers retreat without the skills to fake some Instagram posts.

Unfortunately, Danni has chosen the worst possible time to pretend she’s in the City of Light. Little did she know, crunching the numbers from her Bushwick apartment to ensure her portrait in front of the Arc de Triomphe would post at breakfast, a terrorist attack set off multiple bombs at multiple tourist locales—including said arch. Danni tells the world she was at the sight of a nightmare, falls asleep without so much as a worry, and awakens to comments, texts, and missed calls wondering if she’s alive. What then should she do? Tell everyone it was all a scam and lose her job, chance to sleep with Colin, and potential writing career? Or double-down for the astronomical engagement bump? Disney doesn’t call her “unlikeable” for nothing.

But more than lie for the cred, corner office, and Colin’s interest, she discovers fifteen minutes of fame can sprawl out much further. Unsure of what to write (since she didn’t actually experience any trauma), Danni attends a support group of real survivors sharing their pain. Amongst them is 17-year-old Rowan (Mia Isaac), a school-shooting survivor and globally recognized activist known for her powerful spoken-word excoriations of those complicit in her suffering. Who better to glean a few lessons from and really hit the zeitgeist to propel Danni’s new artistic path forward? And by “glean” I mean take Rowan’s words, platform them under her name, and reap the celebrity benefits. By doing so, Danni enters a completely different world and discovers her materialistically vapid existence can’t compare.

It’s a familiar trajectory portrayed with a boldly wanton disregard for the consequences. Whereas most dark comedies of this ilk would play it all for redemption, however, Shephard understands the value of holding horrible people accountable. That doesn’t mean Danni isn’t allowed to comprehend her violence. She becomes haunted with hallucinations that place the unknown bomber into her periphery whenever she’s about to make her unforgiveable situation worse. Something inside her knows what she’s doing is wrong, and it’s desperate to tell her as much, but her privilege refuses to let it sink in. Eventually her lie even starts manufacturing good, either by creating a conversation or helping Rowan heal—the latter giving Danni her first real friend. She’s so deluded that she believes she’s successfully balancing the scales.

And why not? This is her story, right? Nobody wants to believe they’re a villain. But that’s where Not Okay gets interesting: whereas everything that focuses on Danni and her choices plays like a farce of increasingly problematic decisions, the introduction of Rowan creates a shift. Despite only ever being on-screen with Danni, Shephard gives Rowan an equal footing in our consciousness. Half of it is that she truly is everything Danni wishes she were; the other half is that Isaac supplies the character the rage, fear, and pathos to electrify us as effectively as she does Danni. The more we see Rowan as the real hero, the more Danni subconsciously realizes another pivot is necessary. Spotlighting Rowan allows her to make amends and deflect from her deceit.

As such, the focus gradually leaves our star. Even though Danni continues being our conduit into the story, she starts being on the outside looking in. She’s watching and listening to Rowan with tears in her eyes. She’s becoming the bystander to an authentic voice with passion, and her despicableness grows—Rowan becomes representative of Danni’s victims. There’s power in that realization that goes beyond teaching a lesson. It goes beyond punishment too. We’re talking about a young woman speaking truth to power on an immense scale who’s unknowingly being appropriated for superficial gains. What if Danni’s reckoning (Shephard starts the movie with the inevitable online backlash to ensure we know she will be caught) isn’t about her demise but Rowan’s renewed ascent?

That doesn’t mean Shephard is justifying Danni’s actions. Allowing someone’s evil to help propel someone else’s strength doesn’t excuse the former. The gun lobby and crooked senators allowing school shooters to have open season on America’s children aren’t absolved of their malice just because the tragedy wrought creates activists like Rowan who might be able to stem the tide. The final line of the film says everything you need to know: “While enough time might pass to forgive you, we will never be okay.” Redemption isn’t earned. It’s received. You can be apologetic and charitable. You can even be a martyr for the cause. Nothing you do after the fact erases what you did to create the problem in the first place. You’ve waited far too long.

Is the tonal marriage perfect between the over-the-top hijinks about the gross commodification of “wokeness” and melodramatic exposure of the cost those actually fighting must pay as a result? No. In many instances it seems Shephard does want us to pity Danni (Deutch’s performance almost deserves it too once she finds a conscience hiding below her vanity) despite her endgame proving the opposite. It doesn’t ruin things because Danni’s evolution is kept in context with her treachery through Rowan. The latter’s unassailability allows the juxtaposition between poser and hero to be present throughout. No matter what Danni does, she will never reach Rowan’s heights. So we laugh at her mistakes and cheer her pain knowing she’ll never be more than that punchline while Rowan continues moving mountains.