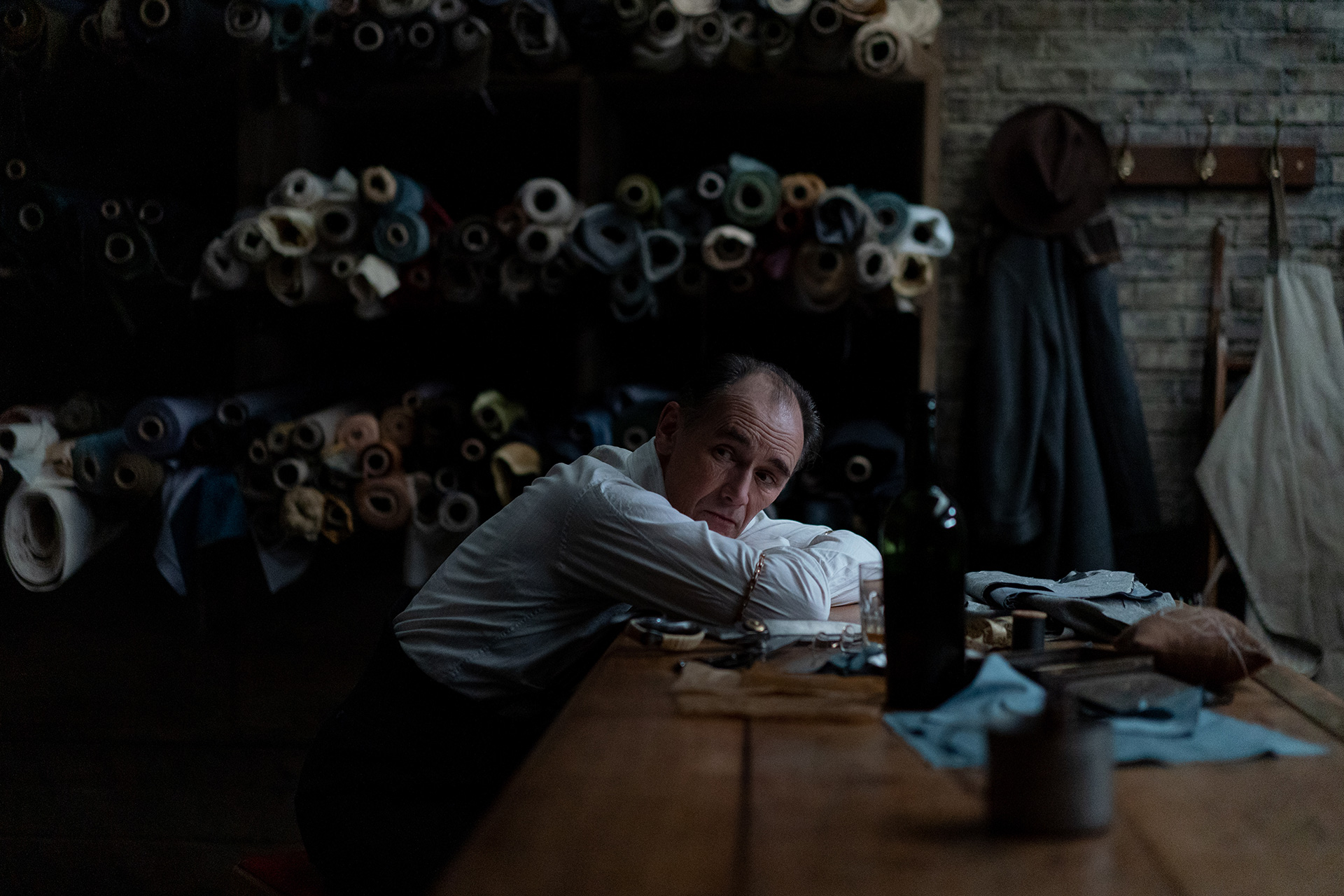 The key to a good mystery isn’t tricking the audience as much as it is entertaining them. The more you watch from this genre, the less slips past your perception. The moment the filmmaker fails to maintain their “trick” is therefore the moment they lose their viewer—there’s nothing else for us to grasp onto. Director Graham Moore and co-writer Johnathan McClain understand this fact. They know they can lean into the usual double-cross tropes if they keep the pace moving and characters on their toes. The quickest way to accomplish both is by targeting those same characters with their trickery instead. There’s no better deflection. If we’re too busy smiling about what we know that the people onscreen don’t, maybe we’ll end up surprised too.

That which is hidden throughout The Outfit is thus that which is left unsaid. Not lies. Not subterfuge. Just silence. If we don’t know to ask, we can’t know to hunt. So we sit and watch what we’re given and satisfy our curiosity with that which we see: namely an aging British “cutter” (don’t dare call him a tailor, anyone with a needle and thread can be a tailor) in Chicago known affectionately by the local mob family as “English” (Mark Rylance). He’s an unassuming businessman with impeccable craft who works all hours to chase perfection with every article of clothing he makes. And with the help of his secretary Mable (Zoey Deutch), he can spend that time in silence with his board and shears.

It’s this reason the Boyle family likes him. Led by Roy Boyle (Simon Russell Beale), this crew of gangsters makes certain to frequent the shop as loyal customers because of a quid pro quo embodied by a wooden drop box in the back room. “English” sits and sews while men in his suits enter without a word to deposit envelopes and he remains seated, sewing whenever Roy’s son Richie (Dylan O’Brien) and trusted lieutenant Francis (Johnny Flynn) arrive to collect the contents. He doesn’t ask questions because he doesn’t want to know answers. This isn’t about earning protection. It’s not about blackmail either. From what we glean, “English” and Roy are friends—or as much of an approximation of friends as is possible.

Unfortunately for “English,” silence no longer becomes an option when Francis and a bloodied Richie come calling in the middle of the night unannounced. Suddenly his bespoke suit shop becomes the de facto headquarters of a turf war gone sideways. Talk of a rat is heard. Seeds of betrayal are laid. And the answers to everything are potentially held on a stolen cassette tape that both the FBI and the Boyles’ nemesis would do anything to retrieve. The man who wished to stay in the dark now knows secrets that could get him killed. On the flip side, however, those secrets also make him part of the “family.” So while his store is no longer silent, he could remain silent himself. That he doesn’t becomes the real mystery.

Therein lies the entertainment; there’s no movie if he simply bides his time to escape unscathed. The moment he utters a lie only he and we know it becomes impossible not to inch a bit closer to the edge of our seats. What’s his game? Who is he protecting? Is he the rat? All the usual questions come out of our subconscious, and all of them are relevant to what’s happening—but only superficially. We can guess them all and anticipate the worst (the camera loves to cut to blood dripping from an old trunk), but we don’t mind the ease at which we do so because we’re enjoying the ride. The overarching roller coaster pitting Boyles against LaFontaines and the spinning teacup where Francis sits.

He’s who Moore and McClain set in their crosshairs. After “English” and us, Francis knows the most concrete facts. He also has the most to lose considering his own actions within. So when “English” starts weaving his fictions, Francis is their main target. It makes sense because Francis is currently his most dangerous foe. The Boyles like “English.” They trust him. Richie is already jealous of Francis for saving his father’s life, so suspicions wouldn’t be difficult to plant. And “English” is doing everything he’s asked to do (like he’s always done), so what reason would Roy have to suspect him? The unassuming man in the corner is unexpectedly thrust into the spotlight and he handles the pressure with aplomb, ducking and dodging and building a new narrative.

It’s a role that demands a presence such as Rylance because the whole is very theatrical in its one-set staging. As the entirety of The Outfit occurs in his shop with people coming and going, “English” becomes both our guide and our constant. Montages of the day-to-day unfolding beneath his monologuing (diary-like instructions explaining his trade with the necessary physical details and philosophical ones) familiarize us to the surroundings as far as front room, fitting room, and back room goes. We know where the drop box is. Where the front door is. Where Mable’s collection of snow globes is. We watch and listen much like “English” does, readying ourselves for the inevitable moment when those brief glimpses are provided the necessary context we didn’t even know was missing.

Don’t therefore get caught up in easy reveals. Moore is baiting you into thinking you know everything there is to know so you don’t go deeper to figure out the rest. I don’t say that to now go digging. I say it so that you don’t let your frustrations with familiarity and contrivance ruin the investment this film deserves as far as seeing it through to the end. That’s not to say the climax isn’t an easy spot either, but its execution is effectively drawn for compelling dramatics and a memorably emotional turn for Rylance. He sinks his teeth in after engrossing us with the introspective, survivalist’s intellect to keep breathing despite multiple guns pointed in his face. Much like “English,” this unassuming thriller hides some bite.

The Outfit opens on March 18.