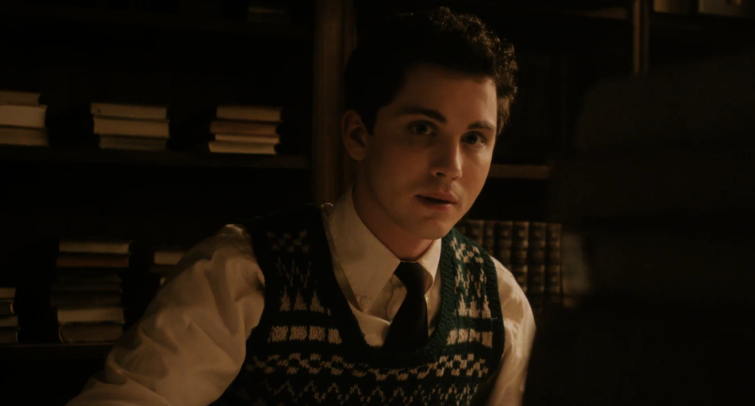 After helping filmmakers such as Todd Haynes, Ang Lee, and Todd Solondz shape their careers, James Schamus has finally made the leap from producer to director with an adaptation of Philip Roth‘s 2008 novel Indignation. The 1951-set feature follows Marcus Messner (Logan Lerman), a Newark-bred Jewish teenager heading to his first semester at a Lutheran college in Ohio. Ahead of a summer release, the first trailer has now arrived.

We said in our Sundance review, “This is the sixth feature to adapt a Roth novel (Schamus is also on screenwriting duties), and in a post-screening Q&A one of the film’s producers read an e-mail from the author, who found Indignation to be the most faithful and truthful adaptation of his work. Indeed, after a fairly jumpy, routine first act settling us in, Schamus wrings out the vigorous dialogue by letting a standard plot fall by the wayside and have the film luxuriate in a number of spectacularly heated conversations.”

Based on Philip Roth’s late novel, Indignation takes place in 1951, as Marcus Messner (Logan Lerman), a brilliant working class Jewish boy from Newark, New Jersey, travels on scholarship to a small, conservative college in Ohio, thus exempting him from being drafted into the Korean War. But once there, Marcus’s growing infatuation with his beautiful classmate Olivia Hutton (Sarah Gadon), and his clashes with the college’s imposing Dean, Hawes Caudwell (Tracy Letts), put his and his family’s best laid plans to the ultimate test.