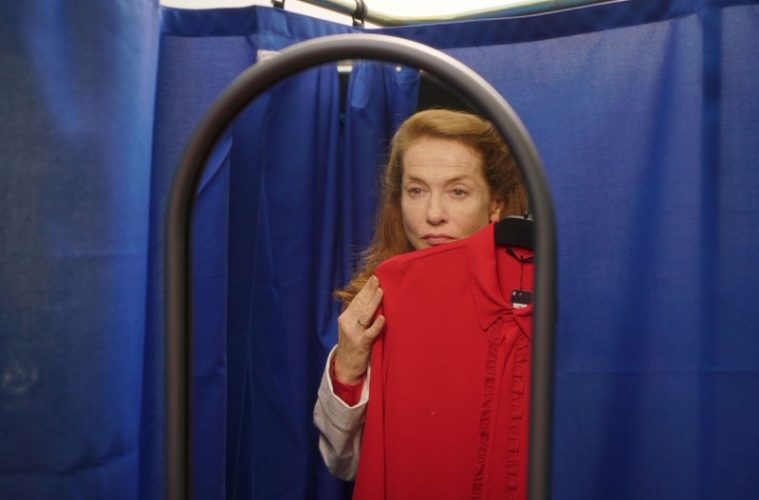 Mrs. Géquil is a delicate woman, at least in the eyes of her patronizing husband (played by José Garcia) as well as, perhaps, in the eyes of her boss and the vast majority of the students in her class. However, if the Robert Louis Stevenson reference in the title hasn’t led you to this conclusion already, then perhaps the casting of Isabelle Huppert in the lead role just might: she will not be referred to as delicate for very long. Mrs. Hyde, a socially bellicose, darkly humorous farce with aesthetic and spiritual echoes of both giallo horror and recent Kaurismäki, is the latest work of film critic-turned-actor-turned-director Serge Bozon. He’s a filmmaker who has, in the past, used similarly absurdist tropes — although never through such a playfully pseudo-supernatural façade — to talk about issues of class and gender politics in contemporary France, evidenced in Tip Top (also with Huppert) and La France.

Set in 2009 (presumably to avoid any potential plot holes concerning camera phones), Huppert’s Géquil is the respected physics teacher (an underappreciated profession the great actor has become increasingly adept at dignifying) of a group of students in Marseille’s Lycée Arthur Rimbaud, or at least she’d like to think so. The classes of the Rimbaud are, like those of the majority of France’s Lycée, split into two types: classique, which cover a wide range of subjects and are more geared towards university, and technique, which focus more on vocational topics. Géquil’s is the latter and so — as tends to be the case in movies set in the suburbs of the country’s larger metropoles — largely male, largely lower middle class, largely of minority extraction (and when French films talk about race they tend to talk about class), and largely not bothered.

The film’s other half-hero, half-antagonist is a student named Malik, a physically disabled young man who uses his gift for classroom disruption to garner the respect of the other boys, respect that he feels he is denied due to his affliction. Bozon and Axelle Ropert’s loosely-adapted screenplay is split into three chapters; the first dedicated to Géquil, second to young Malik, and only the third to the titular Hyde. That transformation, however, actually comes quite early on when a thunderstorm hits the area and Mrs. Géquil, busy at work in her off-site pre-fab laboratory, finds herself at the wrong end of an electrical charge that has traveled through one of her apparatus. The “delicate woman” soon finds that she is full of beans, defiant, professionally motivated, and more open to wearing a blood red blouse. She also takes up a new nighttime hobby of transforming into a being of pure energy and burning living things alive.

That aforementioned costume switch should not be undersold, nor indeed should any contributing component of Mrs. Hyde’s potent aesthetic, a look that harnesses the soft light of early summer to best bring out the pastel blues and yellows of Laurie Colson’s gorgeous set design. Cinematographer Celine Bozon’s framing and camera moves compliment it with assured grace while also being alive to the film’s more comedic moments, many of which can be attributed to Romain Duris’ scenery-eating turn as the school’s rather self obsessed principal, a bequiffed and flamboyantly dressed character who Duris keeps just on the right side of broad comedy. “This is my first minute’s silence, I want it to be perfect,” he proclaims the morning after Géquil’s first kill. It’s a line to suggest that cynicism is never in short supply in Bozon’s world and Mrs. Hyde is at its — or more accurately her — best when it raises the middle digit to similarly unpleasant attributes of the contemporary western psyche.

Huppert embodies this as the newly invigorated Géquil, first helping Malik to realize his own potential before using a class project (that of building a Faraday Cage) to stick it to the education board’s apparent prejudice towards the less academically gifted students that tend to end up in technique classes. Bozon achieves this while steering well clear of anything that might be considered mawkish. Indeed, there is much to savor in this beautifully-crafted movie, particularly as we find Isabelle Huppert dealing comeuppance to characters who carry such prejudice — whether that be through public humiliation or more Old Testament-style justice.

Mrs. Hyde premiered at the Locarno Film Festival and opens on April 27.