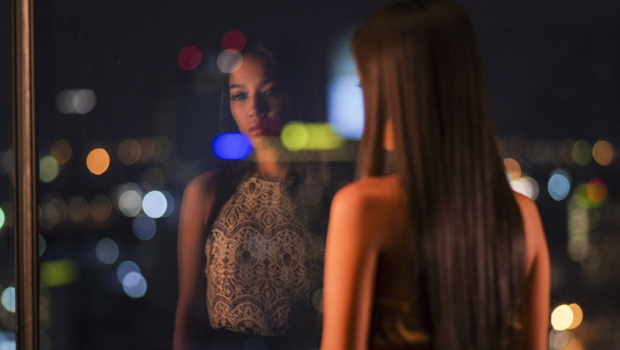 Two echoing images. The film’s very first, a reflection cast as our heroine, Luck (Subenja Pongkorn), stares into the glass window of a high-rise building as a man who claims to love her is in the adjacent room. Our second is in a Bangkok brothel: women wait behind a sheet of glass for men to greet, but what do they do all day? The impulse behind both is repetition, yes, but also patience for a change that may never come.

Though, being in a world where change still feels dictated by men waving around money, Bangkok Nites isn’t a brothel melodrama in the vein of Street of Shame or Flowers of Shanghai, but the remarkable case of a three-hour epic that intends to intermingle the state of capital and national identity under a character-driven narrative, split between two-shots of drunken men and landscapes both rural and urban. In better words: Jia Zhangke in the streets, Hong Sang-soo in the sheets.

Our two points of entry are Luck and Ozawa (director Katsuya Tomita), people helplessly bound together. The latter is not exactly a high-spender, living in a small, messy apartment. His past military experience is the only thing to his name — he’s still fighting the future. Luck, on the other hand, works as a prostitute to support her family, which she implies is a long-standing tradition. Yet with their customer relationship close enough, she takes away from the neon Bangkok to visit this family, who are situated in a village on the border of Thailand and Laos. That makes up a surprisingly large portion of the film, and Tomita seems to use it to most explicitly make his point about colonialism. Luck’s family home is still in the shadow of various conflicts with France and the United States, including the Indochina and Vietnam wars. (Bangkok Nites somehow managing to employ the sound of helicopters and explosions in a way that feels mysterious, not cheesy.) In blatantly cutting back to history, we realize that the film doesn’t necessarily have a concrete point of view. The machinations of each country are given a talking point, as seen in the time made for side characters — be it an Isan military man living in the jungle that very may well be an apparition, or another remnant of the past in the French tourist seen almost constantly in a drunken state. Every character considers the concept of “paradise”: Ozawa and his various associates try to build business alliances with the goal of turning Japan and Thailand into one, and Luck longs for a more natural world that may have all but disappeared.

It’s hard to deny that Tomita’s film, even with its length, bites off more than it can chew, speaking for both theme and style. Bangkok Nites moves between classical and experimental, and the end credits’ special thanks to Abel Ferrara should tip you off to this picture’s freeness. Employing often inexplicable uses of slow-motion and small digital cameras (a drone shot gradually begins to look so grand that you wonder if it’s computer-generated), the film acquires a liquid-like feel — which, considering how much Tomita tries to cover, may be the perfect match of form and content.