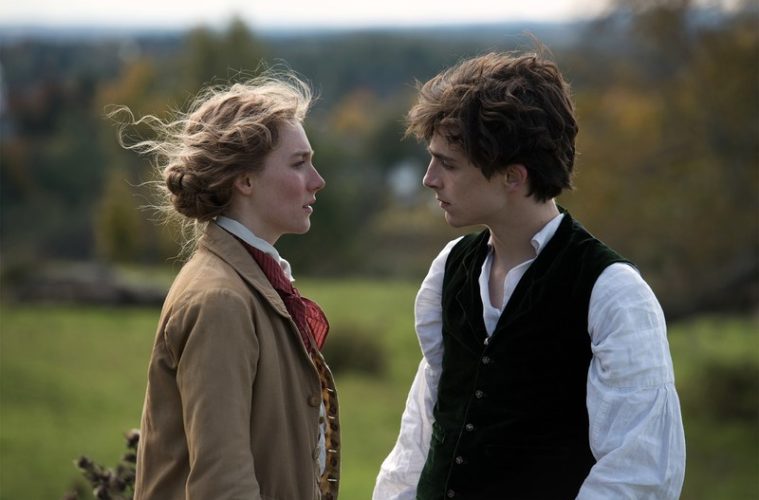 Though living nearly a century-and-a-half apart, there’s a shared fierce independence between the protagonists of Greta Gerwig’s two solo directorial features, Lady Bird and Little Women. Lady Bird McPherson and Jo March, both played perfectly by Saoirse Ronan, have their sights set on a higher calling, a burning desire to make an impact far beyond their small community and rebel against the social pressures set upon them. While Gerwig shows a sincere attentiveness to the emotional rhythms of a coming-of-age story in both, these are also tales about family, specifically how those bonds stay unbroken in life’s most devastating and joyous moments. Through a revisionist lens and rather radical structural approach, Gerwig updates Louisa May Alcott’s 1860s novel with a loving embrace, expanding its ideas of authorship and womanhood for a 21st-century audience without modernizing these themes to the point of strained didacticism. Considering how it recalibrates and dissects its source text, Little Women may be better-suited for those equipped with familiarity of the story–at least on first viewing–but the culminating effect is a whole-hearted love letter to memory, family, and finding one’s own version of independence within the constraints of 19th-century society.

Alcott’s novel had been released over two distinct parts, and Gerwig is not interested in a linear retelling. Her retooling of the structure, with brilliant work by editor Nick Houy, blossoms into Little Women‘s strongest suit. We first get to know the March family in the young-adulthood portion of the novel’s second half as Jo is off in NYC honing her craft at a boarding house, meeting the charming, critical Friedrich (Louis Garrel); the artistic Amy (a stellar Florence Pugh) reunites with Laurie (a sheepishly swoon-worthy Timothée Chalamet), sparking the romance to come; we get hints of Meg’s (Emma Watson) domesticity and class struggles; and we see the piano-loving Beth (Eliza Scanlen), whose life will be devastatingly cut short. By setting up these two alternating timelines, Gerwig is able to consecutively juxtapose how the happiest and saddest of memories throughout life often occupy the same spaces, and how the experiences of youth so often form our fondest recollections. Jo walks down the stairs of their home–an act she’s done a million times–and, in a startling match cut jumping many years, we see how it can hold an entirely different meaning when the life of Beth is in question. Gerwig’s imagination to rethink and update a text already so woven into American culture is deserving of substantial praise, coupled with her deeper insight in expanding the ways Alcott was able to comment on the place of women in family, work, and class at the time.

“I’ve had lots of troubles, so I write jolly tales,” as written by Alcott, is the first text seen onscreen. Gerwig embraces this idea throughout the film, embedding no shortage of perspectives on how troubling the lives of women are in this period while also showing the good-hearted, earnest ambitions and desires of the March sisters. “A female heroine must end up married or dead,” dryly remarks book publisher Mr. Dashwood (Tracy Letts) to Jo March when she attempts to sell her new story. Even after a few substantial edits to make her latest work more palatable to an orthodox audience, he only offers $20, short of the usual $25-30 rate paid to men. Although Jo accepts, it sets the table for her to demand more ownership of her work, leading to a meta addition to the narrative, with Jo as Alcott’s alter ego, beautifully paid off in the film’s final moments.

As in Lady Bird, Gerwig brings a sense of vitality and rhythm to every little detail. The pitter-patter of dialogue as the sisters run through their house feels like as much of an orchestrated dance as does the exuberantly joyful frolicking in which Jo and Laurie partake outside a party–a scene which, as Alexandre Desplat’s glorious score reaches its peak, also adds a touch of modernity, commenting on the timelessness of this story. By layering multiple elements through montage, Gerwig is able to achieve a handful of truly transcendent moments, acutely tugging on one’s heartstrings but never in a forced way–rather feeling like a tender hug. In one of the most memorable, she weaves the reading of a letter from Mr. March (Bob Odenkirk), who is off fighting in the Civil War, with the girls playfully putting on a performance for those nearby, their cheerfulness and creativity bursting through every frame. The longing and wishes of their father juxtaposed with their young ambitions, then through the film’s structure–being so closely tied with the reality of adulthood that will follow–creates a swell of bittersweet emotion.

As the literal book-ends hint at, the experience of watching Little Women feels like one is curled up fireside next to a friend as they recount their life in all its jubilation and regret. Bringing a similar dexterity and tactility on display in his work with Luca Guadagnino and Olivier Assayas, cinematographer Yorick Le Saux provides a painterly approach of warm, rosy hues. When Laurie opens his heart, confessing his life-long love to Jo, it’s one of the scenes of the most overt emotion, and there’s a Sirkian quality to the vibrant, autumn-colored rolling hills of Massachusetts, illuminated in all their glory. The flashback structure is also invigorated through the cinematography as a sunlit, heavenly time playing on the beach turns, with a single cut, to a dreary final visit for Beth, accompanied by Jo, as they watch the tide roll in and discuss mortality.

If there are any missteps within Little Women, it’s that the daring structure can take a few sequences before it fully locks into place. There’s the sense that, because this story has been around for so long and retold in a variety of mediums, a familiarity with its characters is already a given, so as we jump back and forth the first few times, they can feel slightly under-developed, an issue that is soon rectified as the film expands. Once the narrative opens up, what’s formed is a tapestry of overwhelming empathy for both the bonds of sisterhood and a struggle for female identity in a time period where, upon the economic necessity of marriage, one’s individuality is often lost. Steadfast in her strong-headed independence, Jo’s desires are well-considered in the eyes of Gerwig, exploring the cost of such self-reliance in these times. After a heartfelt speech to Laura Dern’s Marmee about freedom, Jo concedes she can feel terribly lonely. It’s this sense of balance–love vs. responsibility and ambition vs. obligation–that form the bonds that make Little Women a thematically rich and acutely moving update for both a new generation and certainly many more to follow.