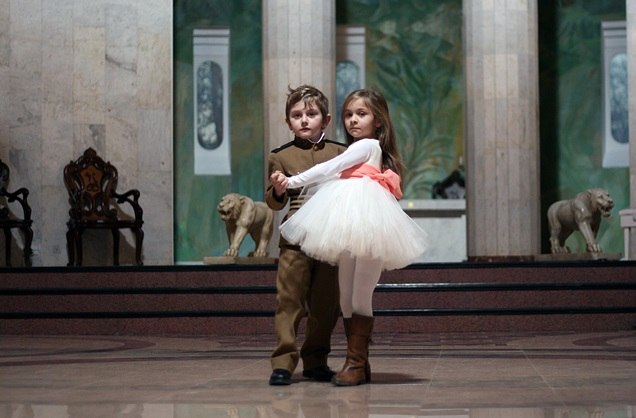 The President (Misha Gomiashvili) demonstrates his dictatorial power to his grandson (Dachi Orvelashvili) by ordering the lights of the city turn off and on. This sets in motion a revolution that will see the two flee across the country together. The President is shot in Georgia (the country, not the state) but its setting is never specified, its characters are never named. While some of the film’s power is lost, the strength of this device is that it becomes a fable, an allegorical story, one that could be happening anywhere in the world – Eastern Europe, the Middle East, North Korea, and so on. As the President and his grandson encounter various citizens of his country, all hurt and angry at his regime, the initially democratic revolutionaries quickly slide into their own violence, fueled by revenge; the military who were so quick to execute prisoners at the President’s command fill the power vacuum.

One obvious parallel is the Arab Spring, for example, the Egyptian Revolution that became a military coup — although it has happened often before and will undoubtedly continue to happen. Mohsen Makhmalbaf is an interesting director – he’s Iranian but hasn’t lived in the country since 2005, and makes films across several genres (he might also be familiar from Kiarostami’s Close-Up, about a man who impersonated him). The President is a departure in terms of scale but just as politically astute and nuanced as his previous work. Despite the metaphors the story remains grounded in the characters. The President’s grandson is a compelling counterpoint to the dictator. He never ordered prisoners to be executed, or understood what his life of luxury was built on, and following the revolution he thinks they are playing a game. The occasional flashback to his upbringing – taught to address his family members by their proper titles, taught how to dance, when he just wants to be a kid and play – are powerful. His loss of innocence is complicated and ongoing, where a simpler film would have maintained his naivety throughout. Likewise the President himself has a complicated journey; being confronted by the human effects of his policies doesn’t totally melt his pride and anger.

The contrast between the two worlds couldn’t be starker, and there’s some black comedy in how the regime sees to one man’s every whim. He’s met at the airport by a full brass band; later they drop their instruments, change into camo and pull out weapons. It’s easy to laugh at the beginning, when the violence is neatly kept offscreen (out of sight and out of mind for the President). The revolution’s violence, seen through the tinted windows of a limo, is unavoidable and matter-of-fact, and all the more disturbing for it. At times it may be difficult to watch, and the plot does feel episodic, but it remains powerful, challenging filmmaking.

The President screened at London Film Festival and is seeking U.S. distribution. See the trailer above.