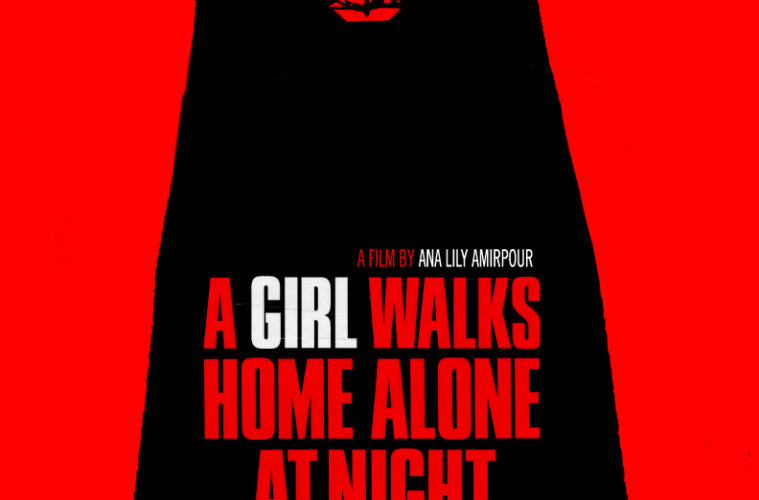 Sometimes cinema’s depiction of vampires feels stuck in the Victorian era, with a dangerously seductive Dracula-type awakening equally dangerous sexual desire in his exclusively female victims. (Twilight, despite Stephenie Meyer’s admittance that she’s never read Bram Stoker’s original novel, still easily fits the mold.) A Girl Walks Home Alone at Night is a challenge to our preconceptions of vampire cinema and the type of films coming out of Iran. Its tale is set in an industrial Gothic landscape dominated by the smokestacks and oil-drilling rigs of a nearby power plant; its protagonist is a James Dean lookalike with leather jacket and classic car; and it’s shot on anamorphic lenses in black and white, resulting in some incredible lens flares.

The residents of Bad City have problems. Arash (Arash Marandi) owes money to a gangster. Atti (Mozhan Marnò) recently turned 30 and is looking for a way out. The Girl (Sheila Vand) is a lonely vampire who might be trying to kill only those who deserve it. These threads loosely weave together, all three lonely outcasts whose lives will somehow impact each other. Ana Lily Amirpour, adapting her 2011 short of the same name into a feature directing debut, is never concerned with building tension when this is going to happen exactly; rather, she’s content to establish a very distinctive and compelling place and tone. This will undoubtedly frustrate some audience members but will intrigue those who can get on its wavelength. The black and white is crisp, the lighting is classical and high-contrast (the makeup the Girl wears in public appropriately enough resembles silent film star Theda Bara, a.k.a. “The Vamp”), but every so often there’s an exception. The widescreen monochrome feels very ‘60s, as black and white was being phased out of Hollywood, but the anamorphic format is familiar to us through sci-fi of the late ‘70s and ‘80s, Alien and Blade Runner included. Attempts to pin down a time period are useless — classic cars, tape cassettes, vinyl records, cell phones all co-exist. Your usual frames of reference for watching a film are mostly useless, as are your expectations for genre.

Bad City is a ghost town, a netherworld, an intermediate zone where those who can’t come of age are doomed to never escape. It’s the modern equivalent of witching hour, when you can walk through a medium-sized town with the impression that only a handful of people live there. What happened to everyone else? The opening titles show Arash, holding a cat, casually walking down a street that’s next to a pit full of bodies. Later a child will watch another body dumped there, as if it’s routine. Maybe that’s where everyone’s gone? We’re properly shown only one real outsider — Arash works a rich family and the daughter invites him to a party — and even in the party scene there are, at most, three or four faces. It’s a striking and eerie literalisation of the experience of adolescence, of feeling alone against the world.

While those sold on a horror movie might be disappointed, Amirpour’s film is as elegant and enigmatic as its title, and will demand repeat viewings.

A Girl Walks Home Alone at Night screened at London Film Festival and will open on November 21st. Watch a new trailer above.