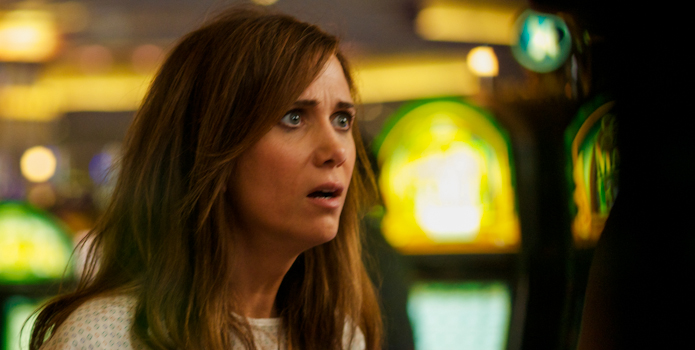 Kristen Wiig Melts Down In Theatrical Trailer For ‘Girl Most Likely’ After premiering at Toronto International Film Festival to poor reviews (including ours), distributor Roadside Attractions are attempting to rid themselves from the bad buzz tied to the latest Kristen Wiig comedy vehicle by giving it a new name of Girl Most Likely. Previously titled Imogene, we’ve now got the theatrical trailer, for the film from American Splendor directors Shari Springer Berman and Robert Pulcini.

In our review, we said “all the quirk adds up to nothing; passable gags that fade away three seconds later” and the film “fails because the human pain at its center never co-exists with the comedy,” but before the trailer, we’ve also got word of co-star Annette Bening‘s next role. THR reports she’s joined the Al Pacino-led drama Imagine with Bobby Cannavale and directed by Crazy, Stupid, Love. writer Dan Fogelman. As we await an update on when that film will begin production, check out the Girl Most Likely trailer below, also featuring Matt Dillon and Darren Criss.

Imogene is a failed New York playwright awkwardly navigating the transition from Next Big Thing to Last Year’s News. After both her career and relationship hit the skids, she’s forced to make the humiliating move back home to New Jersey with her eccentric mother and younger brother. Adding further insult to injury, there’s a strange man sleeping in her old bedroom and an even stranger man sleeping in her mother’s bed. Through it all, Imogene eventually realizes that as part of her rebuilding process she must finally come to love and accept both her family and her Jersey roots if she’s ever going to be stable enough to get the hell away from them.