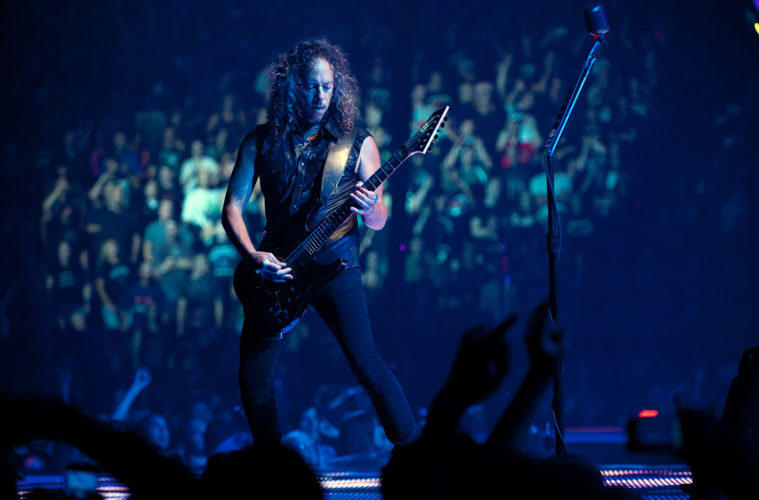 Being a long-time fan of Metallica, I was excited to sit down with Kirk Hammett, the lead guitarist of the legendary heavy metal band. The band’s new film, Metallica Through the Never, is an IMAX hybrid of fictional narrative and concert directed by Nimród Antal (read our conversation here). Sitting down with Hammett at Fantastic Fest, we discussed the way that he finds peace while traveling to so many different places and what he seeks out during his trips. We also chatted about surfing and whether he’s seen any sharks, the type of films he enjoys, why they picked Nimrod, how the chaos of a film festival is even more strenuous than touring, and more. Enjoy our entire conversation below.

So, what’s your experience with film? What do you seek out?

My taste in movies is like my taste in music. I’ll give anything a chance. I’ve had a fascination with film ever since I was five years old, that was when I saw my first horror movie. Throughout my whole childhood, I was just obsessed with horror films and that obsession sticks with me today. I don’t watch just horror films, I watch everything — documentaries, dramas, sci-fi, whatever, comedies, but my favorite genres are horror and kung-fu movies! [laughs]

Yeah, what is it?

Yeah, I heard something about it and I heard he was in it. I just don’t know enough about it.

So, were you at Toronto?

Was that your first film festival experience? Are you not able to take it in and watch any movies?

Yeah, the schedule is just too crazy. I would love to stay awhile and watch The Green Inferno and Afflicted and the Man of Tai Chi. But our schedule is just nutty and somehow in there I have to fit eating and sleeping and I’m not doing a very good job of that either.

I have to wonder, is the film festival experience more chaotic then your 9-5 daily life?

It’s definitely different from us being on tour. We would get up, maybe do one or two interviews at the venue, we’d play the show, probably fly into wherever we’re going to next, after the show and do the same. But for this promotional tour, it’s a certain amount of interviews during the day, then maybe an appearance here or there and maybe more interviews or phoners and then introducing the film, then doing a Q&A afterwards. It’s labor-intensive. It’s very different. Talking about our movie is a lot different from talking about an album. When you talk about an album you’ve made, you’re so intertwined with the making of it, from beginning to end, so there’s a lot to talk about, a lot of different aspects to talk about. It’s just the band and maybe the producer.

But with the film, there’s so many interpretations of what the film is, or what it isn’t. It’s hard to talk about it because it’s not just the four of us and a producer in the film. To make a film you need fifty people, you need two or three completely different crews of people and it’s just a very orchestrated, collaborative effort. For us, we only came in for the concert footage side of it. We came in for the editing part of it as well, once the narrative was shot. So it’s a different experience, you know. We weren’t there from beginning to end, like we are with an album. So I couldn’t sit here and talk to you about, “Yeah, Nimrod got on a crane and he raised it up and I said, ‘No, Nim! Move it over five feet this way.” I mean, that didn’t happen with us. It was a totally different experience. You know, I feel very, very fortunate that I’m a musician and not in the film industry as my main gig. Nimrod said he got a call out of the blue for the project. How much input did you have originally to go after him?

Well, what had happened is once we decided to make this movie unique and different, we had to put a story in there. We put the word out that we were accepting treatments and looking for directors and once those started coming in, the majority of them were science-fiction treatments, then there was Nimrod’s treatment. And Nimrod’s treatment was the one we naturally gravitated to. Because personally, I don’t see Metallica doing a science-fiction film. There’s something not congruent with Metallica and science-fiction. Maybe U2’s better suited for that…

But we gravitated towards Nimrod’s script because there was something in there that had the spirit of Metallica. For myself, I had thought that Nimrod’s script was the only one that had any sort of potential. It was open enough for us to have some input and steer it the way we wanted to go and make sure everything felt right, to make sure the concert aspect of the movie didn’t dominate the film itself. We can be a force and we were very conscious of trying to maintain a balance between the concert footage and the narrative. I think Nimrod did an amazing job of balancing those two things.

There’s obviously four members of the band, but you are all in separate places right now. Is that just to cover more bases?

It’s just to cover more bases. We do a lot of promotion this way, just so that we can do it simultaneously so that when the movie does come, all the promotion comes out at the same time, everywhere.

Yeah and when we put out a new album, we do the exact same thing. We’ll fly over to Europe together then all four of us will go to the separate corners. We’ll fly into the States and we’ll do the same thing. It’s all spread out. We were just in Indonesia and we talked a lot about the film and we were just in Toronto. Sometimes it works really well when we’re together, like Toronto. Sometimes it’s more effective when we spread out. But, you know, it’s all part of the process of getting the word out and informing people we have a new movie out. And just putting as much work into it as we possibly can to drum up some interest.

Traveling around the world has obviously become old hat. Can you talk about the differences you’ve picked up on your experiences in certain places?

Well, not only am I a musician and a father and a horror movie enthusiast, but I’m a surfer too. So whenever we go to places that are near oceans, Rob [Trujillo] and I instantly seek out surfers and surf breaks and try out all the local surf. We were just in Indonesia and we were in Bali for like seven days. And Bali is like the dream place for surfing. There’s surfing everywhere, everyday, all the time. And for big surfers like Rob and I, that’s just an amazing thing. When we’re landlocked, I’m always trying to find a great restaurant to check out or a museum or whatever I’m into at the time. I like ancient history, poking around in stores, just looking for various little knick knacks. When you’ve traveled so many places, and the same place every time, you start to get to know the place.

There are cities all throughout Europe that I know pretty well, for instance, Paris, London, Copenhagen, and Rome. I know where to get really great gelato or really great pizza in Rome. And so when we get closer to Rome, I say, “what was the name of that pizza place in Rome?” Chances are we’ll figure it out and get there. It’s become an incredibly comforting thing, knowing that you get familiar coming to these metropolitan areas and knowing some information on what to do. We have friends all over the world, it’s just a great thing. And it only comes from years and years of touring, so not only have we perfected it as a lifestyle, but we’ve also perfected it so that it actually works for us in a lot of different ways outside of music. You mentioned you love surfing. Have you had any wild experiences, perhaps a run-in with a Great White?

Not a Great White shark, but I was surfing at this place in Hawaii, on the north shore, about ten months ago. It was 8 o’clock in the morning and sharks like to feed early in the morning and late at night. So, I was up there, there was like three surfers and maybe five stand-up paddle-boarders and one of the guys I was talking to pointed and said, “there’s a shark!” I turned and sure enough, I saw his dorsal fin. I saw his tail splashing in the water and the paddle-boarder just said, “yeah, he’s getting into something there.” Everyone just turned their boards around, very quietly and very calmly paddled to the shore and got out of the water.

But like, a couple of hours later I just drove to a different place and went and surfed somewhere else. [laughs] Usually when there’s a shark attack, it’s a mistake. It’s a mistake on the shark’s behalf. They thought we were a seal or a Sea lion or a turtle or something; maybe the shark was near-sighted or far-sighted, maybe it was murky water and it just saw a black blob. It’s like in California, there’s earthquakes but you can’t walk around everyday in mortal fear. It’s going to hold you back. Shark attacks are just something that surfers have to contend with.

Going way back, when you first started, was that a constant fear or something in the back of your mind?

It was a bit of a fear, but you just learn to just mellow out and try not to attract that energy. I have a great respect for sharks. The Hawaiian word for shark is Mano and that’s the name of the shark god. If you respect Mano, then Mano will respect you. So I try and embrace that every time I’m in the water. Metallica: Through the Never is now in release.