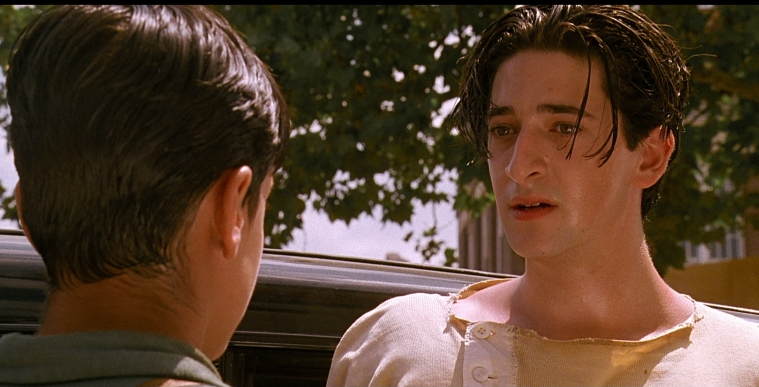 ‘King of the Hill’ Hits Criterion: A Look at Steven Soderbergh’s Studio Debut

No matter what “period” of his career you search, one of Steven Soderbergh‘s main interests has always been the concept of transaction. How does A become B and how does B turn into C? What is the literal process by which a character accomplishes their goal? While digital filmmaking and digital culture made the final period of Soderbergh’s (supposedly now-complete) filmmaking career especially thrilling to watch — as Side Effects and Contagion showed, you can do A, but you can also create the scenario for B so the system will work in your favor — this is, perhaps, ignoring how his earlier films are also emblematic of these aspects. I’ve always found attempts at dividing Soderbergh’s oeuvre into periods (“I prefer the earlier, funnier work”) to be unfair when, often, his more experimental films require some mainstream elements, while his mainstream entries can be shockingly experimental.

King of the Hill, Soderbergh’s first attempt at a studio picture — and now out on a gorgeous Criterion Blu-ray — could certainly be considered a mainstream entity. On its surface, this 1993 narrative might even strike a viewer as typical of Spielberg or Eastwood: a coming-of-age tale set during the Great Depression, with bits of magical realism sprinkled amongst the era’s harsh reality. But Soderbergh’s adaptation of A.E. Hotchner’s memoir identifies something larger than the joys and hardships of that time. While his film is not about economic realities, it’s still very much about economics: the constant struggle to make money and use every bone of ingenuity to hold onto a material presence. Soderbergh’s oddball film acts as a counter response to John Ford‘s mythical depiction in The Grapes of Wrath, instead investigating the function of possession itself as a key to the American dream.

This might seem surprising for a film that can invite so much warmth, the score by Cliff Martinez creating a light skip as its wistful melodies match Elliot Davis’s sun-drenched cinematography. But make no mistake: King of the Hill only uses this surface to put us into the mood of the era. Soderbergh, in an interview with Positif that’s included in Criterion’s booklet, notes his own attempts to not only remain in the child’s sensibility, but also maintain a very different temporal feeling: “People had not become cynical yet… there was this continual optimism that just does not exist now.” And despite such a feeling always hanging over the film’s surface, Soderbergh invests the film with a sense of materiality — a sense that owning, itself, is what strains people in their daily lives.

One gets a sense of this immediately, during an essential early exchange between the young, doe-eyed protagonist, Aaron (Jesse Bradford), and his young brother, Sullivan, explaining the rules stealing someone’s lunch (always the fat kid and never the dessert). Aaron becomes obsessed with material transactions, something partially sparked by his parents deciding to send Sullivan away when they can no longer afford to keep him in the hotel they pay for. Everything in the film concerns keeping material, possessing it, and how hard it can be simply to possess. Aaron tries every which way he can to raise money, including breeding canaries and trafficking liquor, but to no avail. Even trying to keep his dad’s car safe becomes an almost-impossible endeavor (and probably the closest it comes to feeling like a “children’s film”).

Aaron constantly struggles with his identity as a lower-class citizen, lying about his parents’ profession and becoming paranoid when he hears whispers of others commenting on his family’s struggle. What makes King of the Hill so striking is its position as a film about poverty that doesn’t act like a film about poverty — at least, not in the way most films do. Aaron always has a roof over his head, and it’s only during the picture’s last third that a true struggle begins. But it becomes about the consciousness of knowing one does not own as much as another (Billy Thompson doesn’t think it odd how many birds he has) and feeling like your place in American society is divided.

This obsession with materiality and possession comes to the foreground during King’s boldly odd final 10 minutes. Things feel all but miraculously over as the family seems reunited and their economic woes over, but Aaron puts his foot down when it comes to abandoning current possessions, no matter how easily they can be replaced. The strife he’s endured simply to keep what is his feels like a plot element that is uniquely Soderbergh; the need to hold something, own it, and not feel part of a helpless system has been a concern for many of his titles, ranging as far as The Girlfriend Experience‘s financial meltdown anxiety to Solaris’s romantic entanglement to Magic Mike’s body-as-cash metaphor. Soderbergh exposes this period of American history by forcing a viewer to contend with how tenuous privileged existence can be.

While people are quick to relate it to the work of Spielberg, King of the Hill seems more indebted to his descendant, Robert Zemeckis, whether it’s his child-like rendering of the past in Roger Rabbit or the period-esque hometown spirit of Back to the Future. Zemeckis works to re-create those sensations of youthful bliss, but Soderbergh is constantly confronting them; while often shooting scenes in classical shot-reverse shot patterns, he often creates a break that braces the viewer, whether the slanted angles that place characters off-balance, the occasional direct address, or “continuity error,” such as Billy Thompson’s changing shirt (detailed in :: kogonada’s video essay, provided with the release). Each moment of bliss and happiness is juxtaposed with one of fear and reality: a gentle first dance becomes a shocking moment of panic, a father figure’s promise of a better tomorrow transformed into death. With the film’s fantastic and acclaimed hallucinatory montage, as composed through a stutter-step effect, Soderbergh links all these memories and anxieties together into one bold and striking sequence — the first non-linear movement of a very non-linear career.

King of the Hill, then, is perhaps more studied and complex than the allures of its surface would suggest, all of its child-like wonderment and cartoonish archetypes — not to mention the plethora of young talent (like Kathryn Heigl, Lauryn Hill, and Adrien Brody) to giggle at — serving as a façade to create a psychology of the characters, but not its director. It’s perhaps “more emotional” than the likes of his rigid, digitally composed 2000s work, but to say Soderbergh trades one for the other is to limit him as an artist; even Solaris, his coldest and most abstracted work, stands as the most emotionally charged. King of the Hill is just as clinical in its examination of Depression economics as Soderbergh has always appeared, and his vision is as exacting as young Aaron’s playing on a marble field: he always knows the mark he’s trying to hit.

King of the Hill is now available from The Criterion Collection.