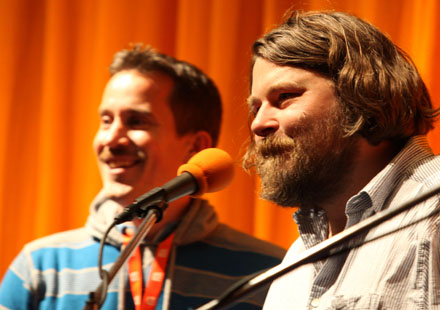 As Twitch informs us, Ben Wheatley, whose Kill List hits theaters next week (a movie I haven’t seen yet, but many are raving about), is looking to make an ultraviolent prison exploitation movie — using claymation, no less. Called Megaevilmotherfuckers, the article compares Wheatley‘s vision to that of 1991 Hong Kong cult classic Riki-Oh: The Story of Ricky, which followed a prison inmate with superhuman strength getting revenge on the corrupt guards and officials by way of martial arts. (Hobo with a Shotgun director Jason Eisener also referenced the movie, in regards to his next projects, during my interview with him from last year’s SXSW.) Wheatley will be teaming up with Lee Hardcastle (whose claymation short T for Toilet will be featured in the upcoming ABC’s of Death) to make the movie.

But before he can get to that, Wheatley has a bunch of other projects to get through first. His follow-up to Kill List, a dark comedy called Sightseers, is currently in post-production, while the director has already announced two more live action projects: a sci-fi movie called Freak Shift, and I, Macrobane, a comedy that will star Nick Frost. Megaevilmotherfuckers may be last on his list or first; I assume it could all come down to timing. Either way, I absolutely love the movie titles Wheatley comes up with. Can we get him to name every single movie from here on out?

Having never seen Riki-Oh, something I promised myself to rectify this year, I don’t really know what to expect with Megaevilmotherfuckers, but it’s terrific to hear that it’ll be done using claymation. It’s an underappreciated art form that is begging to be given some non-Aardman life, and it seems like Wheatley can be the man to do it. At the very least it’ll make a badass SXSW or Fantastic Fest movie whenever it comes out.

Is Megaevilmotherfuckers one of the coolest titles you’ve ever heard or what? I admit that I may have stacked the deck on that question.