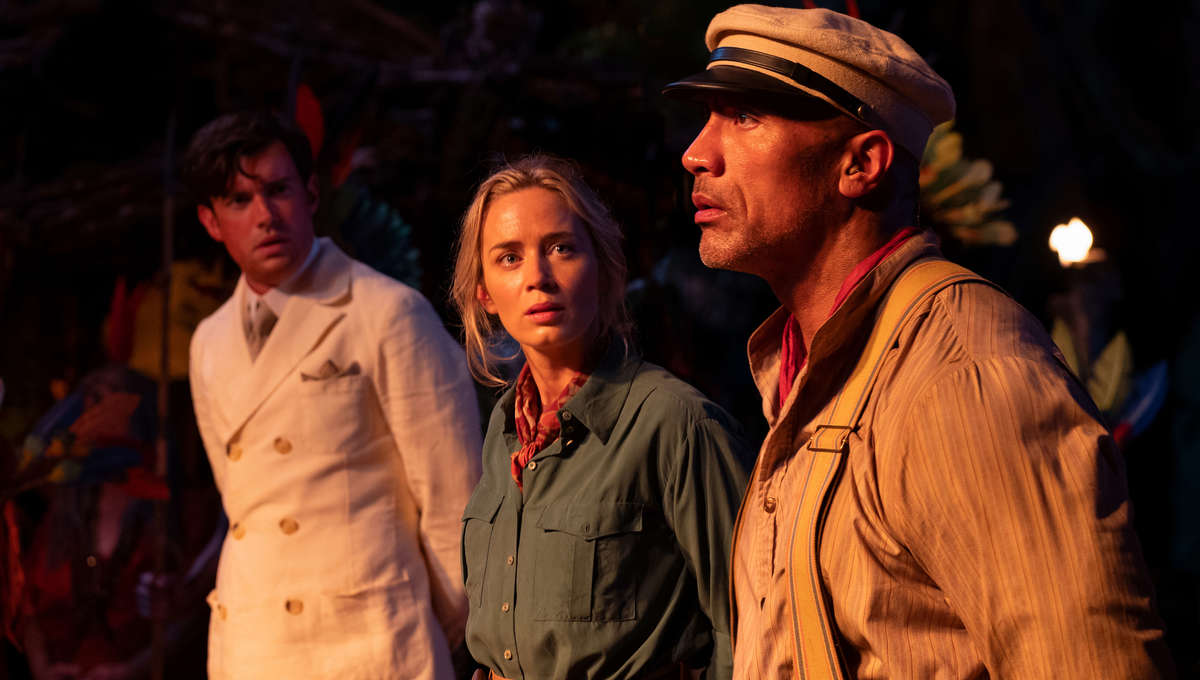 If you’re like this writer and frequently check the IMDb page for The Mummy and Van Helsing director Stephen Sommers, you’ll see an anecdote under the trivia tab about how effects studio Industrial Light & Magic named a scale after him for the number of effects required in a scene. From lowest to highest there was “What the Shot Needs,” “What the Computers Can Handle,” “Oh my God, the Computers Are About to Crash,” and finally “What Stephen Wants.” Now that we’re at a state of cinema where it’s normal for a movie like Jungle Cruise to have every one of its principal characters look lovingly at a computer-generated animal, it’s hard not to consider the Indianapolis native’s mad vision somewhat prescient.

And even with a 16th-century Spanish conquistador prologue recalling both Aguirre: The Wrath of God and The Fountain, the register at play in Jungle Cruise certainly evokes something Brendan Fraser would headline in the late ’90s. As zooming ahead to London in 1919, Dr. Lily Houghton (Emily Blunt) becomes aware of a mystical Amazonian flower called the Tears of the Moon that can bring anything back to life or heal any disease. With her mostly useless, hysterical, bound-to-be-a-male-damsel-in-distress brother Macgregor (Jack Whitehall) hopping along to Brazil, they find themselves in need of a skipper to guide them in the retrieval of this flower.

Enter Frank (Dwayne “always The Rock to me” Johnson), who on a tugboat does his own jungle cruise act for tourists, replete with splashing waves and actors playing regressive indigenous stereotypes—a nod to the theme park attraction “source material.” And the theme park design doesn’t end there, with many backlot sets looking a bit like what you’ll see trying to distract you while waiting in line at Disney World. While your mileage may vary on that, it entails some good vibes.

Jungle Cruise’s overall accomplishment is not being too obnoxious, despite it feeling like everything is pulled in possibly the wrong direction. (A trip down the Amazon on Frank’s boat inevitably leads us to both CG ghost leftovers from Pirates of the Caribbean and an unconvincing romance.) Eventually shedding the chintzy pleasures of its sets for a full-on assault of The Future Stephen Sommers Wants, the film still maintains a kind of likable quality.

There might be some expectation for seasoned B-director Jaume Collet-Serra to really bring something to the table in his official ascension to the big leagues, but he acts here as a more capable and efficient Jon Turteltaub. The CG camera movement and location-mapping in many of his recent pictures turn up in droves, whereas the closest thing to a truly playful image is likely Blunt staring through a kinetograph at Frank’s CG tiger sidekick, meshing the earliest and latest forms of cinema.

Yet being well-paced, and with the two leads kept at a solid, non-smug register while supporting players like Paul Giamatti and Jesse Plemons do the scenery-chewing with exaggerated accents, it’s easy to appreciate Jungle Cruise for simply being a little more pleasant than the average Disney product. Yes, damning with faint praise, but as large-scale film becomes more and more divorced from genuine wonder, it’s hard not to appreciate a few classical notes.

Jungle Cruise opens in theaters and on Disney+ Premier Access on Friday, July 30.