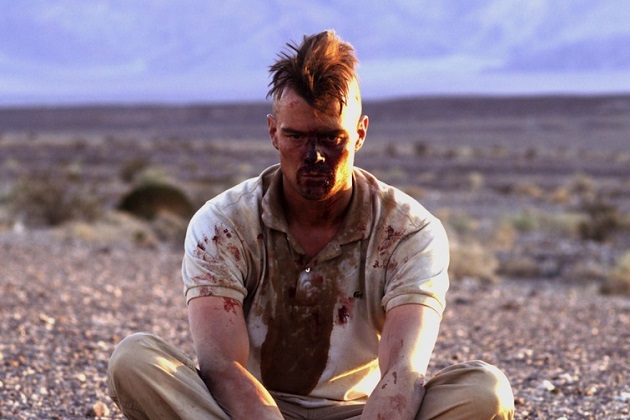 Josh Duhamel Talks ‘Scenic Route,’ Being a Recluse, Commercial Versus Art & How He Strives to Be Better You never know what to expect when talking with an actor that has mainly done romantic comedies and a few action blockbusters. But after being impressed with Josh Duhamel‘s performance in his latest film, Scenic Route, which just hit limited release and VOD, I started to think that it might be a better conversation than I had initially expected.

Turns out I was right, as Duhamel not only was well spoken but he seemed to take genuine pride in his craft and the way he can continually grow. Speaking over the phone last week, we talked about him taking acting classes and how he used that as a tool to prepare for this role in particular, how hard it is to change your stripes in most people’s mind, and soaking in the environment of Death Valley. We also touched a bit upon his reteaming with Dan Fogler for Don Peyote. Enjoy the conversation below.

The Film Stage: I was talking with Dan Fogler yesterday and one thing we touched on, and the film touches on this as well, is this commercial versus artistic side of things. I was mentioning that it’s interesting because he mentions being an author in the movie. But as an actor, you have a chance to become a commercial actor or an artistic actor and I was curious how you see that. Some of your roles have obviously been very commercial and some of them have been artistic, like this one, so there’s definitely a balance there.

Josh Duhamel: Well, I think you’re right. That’s such a good question, Bill. When you start out in this business you have to kind of take what you can get. Just to break in. It’s hard enough to get any role. So early on in my career I was getting things that probably were a little more commercial. But I do work really hard at this and I really want to be a good actor. It’s really important to me and I truly, truly love it. Sometimes it’s frustrating because people see you as one thing and it’s hard for them to do something else. It’s like anything. Even artistic actors, who are known only for artistic films, want to do commercial films. And it’s the other way around.

Rock ‘n’ roll musicians want to be actors and actors want to be athletes and athletes want to be actors. Nobody knows that they’re never happy with what they are but for me, part of the fun and part of the challenge is trying to find things that really give me the chance to show something else. When I read this script, I was like, “Holy crap! This is a beast.” But it’s an opportunity for me to really do something that people have never seen me do before. This was the kind of movie that I got into this business for — to do movies like this. You’re far more satisfied or gratified by getting a chance to do something like this than any commercial movie you can do because you get a chance to really stretch your chops artistically. That’s why I had such a great time, as scary as it was, making this movie. Would it be fair to say that part of your fear because the film is so heavily weighted on yours and Dan’s performances? If you don’t pull it off, the film can’t go anywhere.

Duhamel: Yeah, exactly. That’s why it’s so scary. But that’s what was so exciting about it. That’s why I love getting to do what I do. The challenge… the work you put in really makes it the most fun. Putting in all this work and then getting a chance to go put it up on stage. We looked at this film as a play in the beginning. We rehearsed it as such. It was one of those things that I read and I said, “OK, I’m going to do this but I’m going to approach it as if I’m putting it up on stage.” So what I did is I try to take these workshops every year from an acting coach named Larry Moss. Normally you take a scene from Tennessee Williams or Eugene O’Neil or any of these famous playwrights and you get these long scenes and you have two weeks to rehearse it and then you put it up on stage in front of a whole theater of students. And I asked him if it would be OK if I put one of these scenes from Scenic Route on stage and he said, “Absolutely.” He loved the script. But it was the beginning of my rehearsal period for this. It was a great way for me to kick start that and I had the directors come and watch when I put it up on stage. It was going to take someone like Dan Fogler, who is not only a good actor but an actor with a real commitment to it and an understanding of the kind of work it would take to pull something like this off. That’s why we were excited when we finally got to Death Valley because we put so much work into rehearsal before we got there.

Obviously this is a very different role for you and I’ve got to say you and Dan impressed me. But is this the first time one of your movies have been at a film festival?

Duhamel: A bit, yeah. I went to Sundance for a film called The Romantics but it wasn’t like this. I didn’t have a chance to be involved from the beginning like I did on this one. That was more of an ensemble movie. This was a film Dan and I put together. It was on our shoulders. We were just proud of the fact that we were able to get through it. We loved the fact that the director were as committed to it as we were. It was a true passion project. There was no money involved. There were no trailers. There was barely a craft services. It was truly because we loved the story and the project. This whole experience has been unlike anything I’ve been through before.

This film mainly stars just you and Dan. It’s a small-budget film and you’ve been part of big scale films before. So I’m curious is this was radically different or just on a smaller scale?

Duhamel: Well, it was a much smaller scale budget wise, for sure. But this movie is meant to be a low-budget movie. The more money you have, probably the less effective it will be. You have to make something like this out of love. If you’ve got full trailers to go to in between takes, it takes away from the organic vibe you get just by sitting out there in the desert every day for three weeks. That’s really what I wanted to immerse myself in and become as much of the environment as I could. That’s what it was going to take. It needed to feel as if we really were out there. So I would just go sit by myself out in a little valley away from everybody for an hour in between takes and just become part of the landscape. Duhamel: Yeah, I think I get it from my dad and my grandfather. I’m a bit of a loner in a lot of ways. A bit of a recluse. But it’s tough to find places like that in Los Angeles, of course. But I always try to find some place where I can get away and think and just not be reachable. I have a place in Minnesota near my dad’s house out in the middle of the woods on this lake. It’s got a little hunting shack on it with no running water, no electricity, nothing but just you and the trees. There’s something really peaceful about that. I think everybody could use moments of that from time to time because we’re so connected and interconnected to technology that it’s hard to get in touch with the earth.

Dan was mentioning yesterday that you made another movie together called Don Peyote. I’m curious how that came about. Did he mention that on set or was it something that came about after?

Duhamel: Early on when we were in rehearsal he showed me about 20 minutes of this film that he had been putting together for about a year. Don Peyote, if you haven’t had a chance to see it, you should. It is a trip. [Laughs]. You should take a Quaalude before to fully immerse yourself. But it’s about a guy who goes down a rabbit hole in this conspiracy world and slowly loses his mind. It is truly one of those movies that is out there. He told me about it and I was always curious about how it was going to turn out and after we finished shooting our movie he came to me and said, “Hey, I have a part in this movie. Would you like to do it? Do you still have the mohawk?” So I was like, “Yeah.” So I don’t have a big part in the movie but its sort of him coming across all these strange characters in his journey and I’m just one of those character along the way.

Duhamel: It’s the mohawk grown out a little bit.