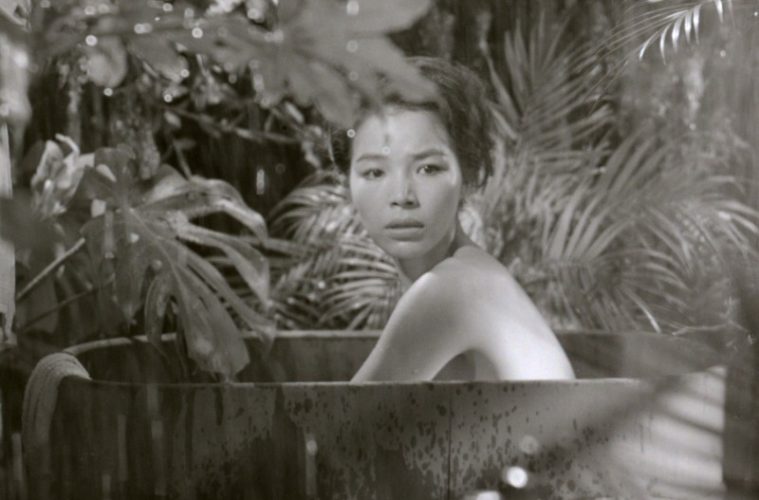 Josef von Sternberg called Anatahan his best film. Borne from more than a decade’s worth of frustration with the studio system, it was, as the last picture he completed, his stamp on his time as a director. Even then, when released in 1953, it was only released in a butchered format, and, as it often goes in such cases, was subsequently abandoned by popular consciousness. But a few times each year, cinephiles (at least ones in major cities) are treated to big-screen resuscitations of long-neglected works. Now, Anatahan has been restored by Kino Lorber to Sternberg’s uncensored version, and it hits theaters again this week.

Anatahan tells the true story of a group of Japanese sailors stranded on the namesake island after a series of shipwrecks in 1944. Abruptly cut off from the war they were fighting, the seamen struggle to maintain order and sanity on the tiny stretch of jungle. This is exacerbated by the presence of a single local woman, Keiko (Akemi Negishi), who inevitably becomes the object of fixation, which just as inevitably foments conflict and, eventually, violence.

The subject matter is lurid, and one might expect a ‘50s treatment of the story to play that up for all it’s worth, yet Anatahan approaches it with a respectful remove. Though irrepressible horniness torments the soldiers, the movie only dips into overt or even covert sexualization in a few moments. An early nude scene does the work of striking the audience with a sense of the men’s hunger for Keiko. Later touches, e.g. Keiko casually resting her foot on one man’s shoulder, do more to raise suspense than arousal. Even 60 years ago, it was old hat to use castaway narratives to reduce humans to their animal nature, but none have done so in quite this way: Sternberg’s eye transmutes base lust into something ragged and desperate – sexuality stripped of sexiness. The plainly artificial jungle set enhances this heightened, allegorical atmosphere.

That feeling of humanity’s total reduction is compounded by how the tale is told. Japanese dialogue is left untranslated, while ever-present narration (provided by Sternberg himself) explains the setting and characters’ actions. The narrator speaks on behalf of all the men, another method by which the movie conveys their dehumanization. First-person plural strips away their individuality. Anatahan elapses seven years – as time crawls on and civilization rots away, they become less identifiable as the characters they were introduced as, now an anonymous hive competing for the favor of Queen Bee Keiko.

Crucially, the role of “queen” is not one that Keiko seeks out, or even accepts. The movie continually contrasts her practicality with the men’s futile war games. When an American plane crashes on the island, several men seize a pair of guns because they see this as the means of attaining power. Meanwhile, Keiko claims a parachute to turn into clothing. Less than a year after their marooning, the party has an opportunity to escape when a passing ship announces news of the Japanese surrender and World War II’s end, but they stubbornly resolve to stay. This is the key, and the utter pointlessness of the holdouts’ situation underlies their every subsequent squabble, culminating in the deaths of several.

Meanwhile, their prize, holding all the true power on the island, has little idea what to do with it because there’s nothing to do with it — not in such a remote, desolate place. It is Keiko’s eventual rejection of power that shows the way to peace. Sternberg’s grasp of group dynamics is marvelous, and it’s a boon that audiences finally have a chance to appreciate this punctuation point on his career.

Anatahan is now screening at Metrograph and will expand in the coming weeks.