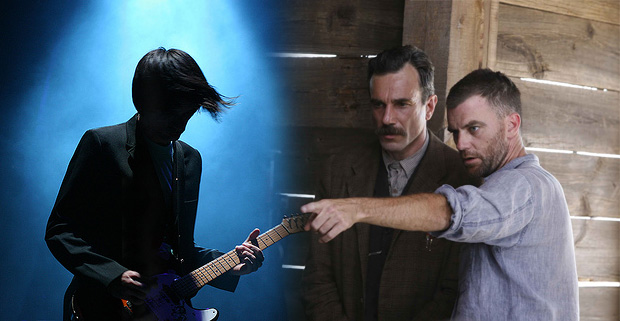 Since Radiohead‘s Jonny Greenwood delivered the tension-flled score for Paul Thomas Anderson‘s There Will Be Blood in 2007, there seems to be an uptick in musicians teaming with Hollywood. We’ve seen The Chemical Brothers provide the Hanna score this year, Karen O did Where the Wild Things Are a few years back, and of course, Trent Reznor gaining an Oscar for the The Social Network and we have his upcoming The Girl with the Dragon Tattoo. Greenwood is about to come full circle, as a new report confirms he’ll be scoring the next film from Paul Thomas Anderson.

Titled The Master, the news broke on Twitter from British record label Babel founder Oliver Weindling (and picked up by Cigs & Red Vines), where it was stated, “Zed-U recorded part of soundtrack for Jonny Greenwood of Radiohead last week. Film (by Paul Thomas Anderson) to appear in 2013.” It looks like the score will be less spare than his last collaboration, as Zed-U is “a British jazz trio” that Greenwood is working with. The only disappointing news is the 2013 mention for release, as we’ve come to expect it would be finished come late 2012, considering shooting wrapped this summer. But if this release is like There Will Be Blood, it could be hitting theaters in the UK then, with a late 2012 release still in store for the US. Check out an overview of the film below.

Philip Seymour Hoffman leads as a man “who returns after witnessing the horrors of WWII and tries to rediscover who he is in post-war America. He creates a belief system, something that catches on with other lost souls.” Loosely based on L. Ron Hubbard, the creator of Scientology, Joaquin Phoenix plays Freddie, “a young drifter who is swept up in the movement and becomes Hoffman’s character’s lieutenant. As everything builds, however, Freddie begins to question the system he’s helped to create.” The supporting cast includes Amy Adams, Laura Dern, David Warshofsky, Rami Malek, Jesse Plemons, Madisen Beaty, Joshua Close and Fiona Dourif.

Greenwood also did the score for Lynne Ramsay‘s We Need To Talk About Kevin, which hits limited theaters this weekend, as well as Norwegian Wood, which will be arriving next in the US. In the meantime, check out a sample from Greenwood’s Master collaborators, Zed-U, below.

What do you think about Greenwood reteaming with PTA for The Master?