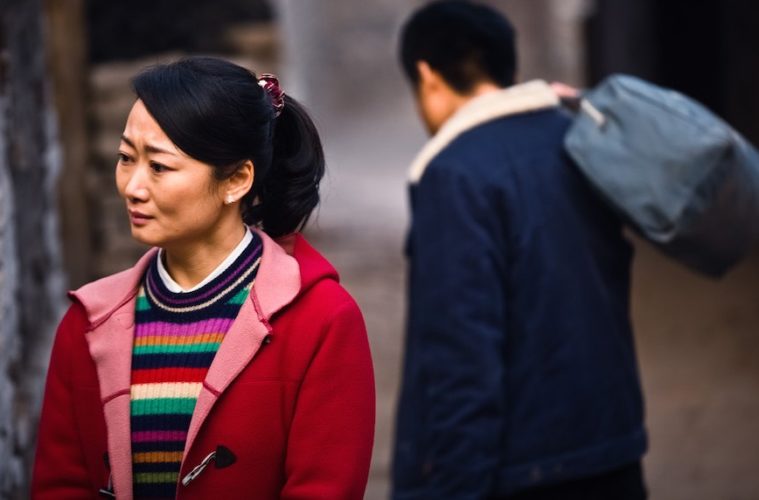 “I think in order for a movie to be appreciated, it ultimately needs to be an aesthetic creation,” director Jia Zhang-ke told us at Cannes this year. “Who would care for a film depicting a lot of social realities but devoid of a sense of aesthetics? If my movies have appealed to an international audience, I hope it’s because on a substantial level, they bring the contemporary Chinese experience to the big screen, and that at the same time, they have an artistic quality to them.”

There’s certainly an appeal over here for his latest, Mountains May Depart, which is a three-part, decades-panning drama that stops by New York Film Festival this week following Cannes, TIFF, and more. Ahead of a release in the first half of next year by Kino Lorber, the first (unsubtitled) international trailer has landed, along with a set of evocative posters.

One of our favorite films of Cannes, we said in our review, “Though vastly more moderate than its predecessor, the ultra-violent A Touch of Sin, Jia Zhangke’s Mountains May Depart continues the director’s move away from the extremely measured, observational style that characterized much of his earlier work. Even as his narratives have become more charged, however, Jia’s thematic focus has remained constant and Mountains May Depart offers his latest reflection on the momentous societal changes that have swept over China as a result of its entry and ascension in the globalized world economy. If A Touch of Sin expressed Jia’s rage at the contemporary impact of capitalist progress on Chinese society, Mountains May Depart is his lament over the direction in which it is headed.”

Check out the trailer and a batch of gorgeous posters below thanks to Keyframe, as well as a clip if you missed it.

Mainland master Jia Zhangke scales new heights with MOUNTAINS MAY DEPART. At once an intimate drama and a decades-spanning epic that leaps from the recent past to the present to the speculative near-future, Jia’s new film is an intensely moving study of how China’s economic boom – and the culture of materialism it has spawned – has affected the bonds of family, tradition, and love. MOUNTAINS MAY DEPART opens in 1999 to the strains of the Pet Shop Boys’ “Go West,” a song whose promise of blue skies captures the dreams of affluence that seized so many Chinese youth at the turn of the century. In Fenyang, childhood friends Liangzi, a coal miner, and Zhang, the owner of a gas station, are both in love with the town beauty Tao (a luminous Zhao Tao, Jia’s muse and wife). Tao eventually marries the wealthier Zhang and they have a son he names Dollar. As the years fly by and some members of the cast do, indeed, “Go West,” Tao tries to keep her home and that sense of optimism alive even as her own son loses sight of everything in his childhood, save one mysterious song that haunts him. Lyrical, moving, and dazzlingly ambitious, MOUNTAINS MAY DEPART is one of the year’s most important films.

Mountains May Depart will be released in 2016 thanks to Kino Lorber.