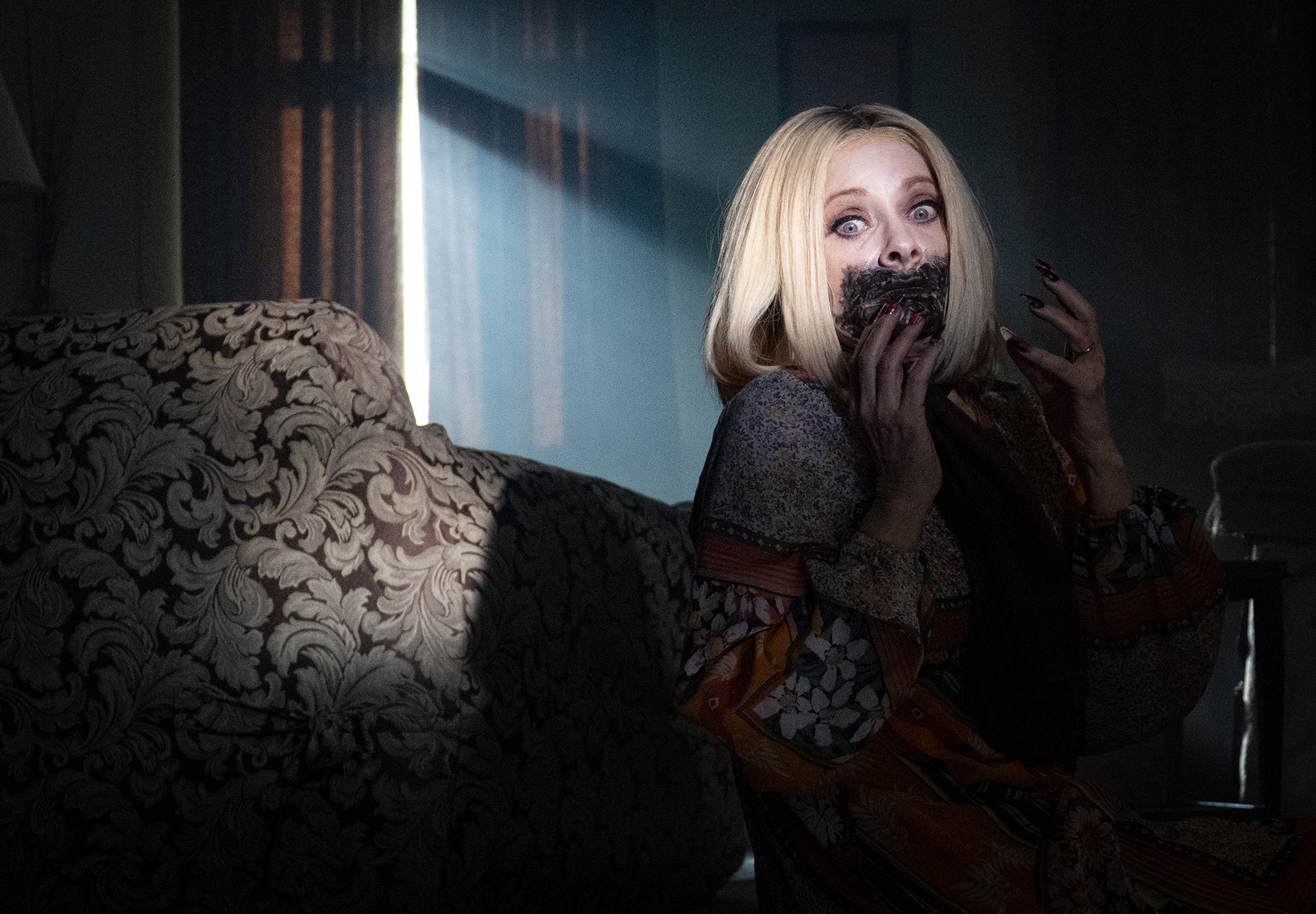 The opening scene of Jakob’s Wife sets the stage for what’s to come as Reverend Jakob Fedder (Larry Fessenden) sermonizes about the love a husband should have for his wife. His partner Anne (Barbara Crampton) is in the front pew listening, but never smiling. She’s not hearing his words and nodding her head in agreement. She’s actually staring daggers at the reality of what his words mean. Because Jakob never says anything about that love being for her benefit. He never says men should love their wives because they deserve respect or equality or even that very love he believes he provides. No. To love your wife is to “love yourself.” Even in what should be a selfless act, this man (and those listening) thinks only of himself.

How does director Travis Stevens and co-writers Mark Steensland and Kathy Charles bring that “love” to life? By showing how often Jakob cuts Anne off while she’s speaking to more or less say what she had already started saying. By showing how she’s always by his side when it comes to his endeavors despite him only having disparaging comments for what she’s doing—namely organizing the rehabilitation of a historically relevant site he apparently would rather see weather away for posterity. And by showing that even when she’s cooking him breakfast and dinner, his call of her name demands an immediate response. Just because Jakob isn’t physically abusive and doesn’t raise his voice doesn’t mean he hasn’t facilitated thirty years of Anne gradually losing herself to his needs.

All that changes, though, when she encounters The Master (Bonnie Aarons)—a mysterious vampire who has come to town with an army of mice rather than bats. Why? Because this isn’t your usual male-centered monster movie dealing with lust and hunger from a male viewpoint. Jakob’s Wife is about empowerment and rebirth. An old flame (Robert Rusler’s Tom Low) even calls Anne a “church mouse” at one point to illustrate his inability to fathom how the teenager he remembered with dreams of traveling the world could become saddled to a small-minded man with no aspirations to leave their equally small town. How then does that mouse spread her wings to fly? The first step is waking to the reality that they’re her wings and hers alone to use.

It’s a really interesting spin on the vampire trope that works quite well in moments when it is the driving force of the plot. The unfortunate truth of the matter, however, is that those moments don’t come along as often as you might expect. The reason is simple: the film is very much a comedy first, horror second. And the comedy is goofy and campy in ways that ultimately subvert the introspective messaging at its center rather than enhance it. There are glimpses of the opposite—like Jakob finding ways to quickly process supernatural occurrences and position himself as the vanquisher of evil his collar demands and how that exacerbates the power inequality of his marriage—but not nearly enough to stop causing the whole to feel disjointed.

There’s a commendable if handcuffed desire to “both sides” what’s happening on-screen that adds to this trouble because the filmmakers have stated they didn’t want to color Anne as right and Jakob as wrong. This is about a marriage and its give and take—a relatable dynamic they’ve experienced themselves. Because the story at its core is about The Master trying to open Anne’s eyes, however, it inherently does make Jakob (unwitting or not) “wrong.” And by never really dealing with that truth, a lot of the couple’s actions in the aftermath of Anne being bitten are weighed down by it. You can’t dismantle this power structure unless you choose her side to do it. What we get is therefore fun, but rarely as deep as was possible.

And fun is enough as long as you know that’s all you’re getting. Any disappointment I received from the experience is thus mostly driven from the fact that the way things were going had me anticipating more. The little things like Jakob’s brother (Mark Kelly) and sister-in-law (Sarah Lind) providing a loving and communicable contrast to them (their lack of religion is an obvious sign as to why although it’s not explicitly set-up as one) or young Amelia Humphries (Nyisha Bell) falling prey to The Master’s liberation as prisoner to an emotionally abusive relationship with her alcoholic mother provide additional context even if they too are somewhat left by the wayside. Whether you see it as an added bonus or evidence of stopping short is up to you.

Either way, none of that prevents you from enjoying what is delivered. Crampton and Fessenden are great in their respective roles both when the drama asks them to grab our attention and the comedy asks them to goof around. I liked the humorous lens through which we witness Jakob’s flaws (prepare for mouth sounds as we zoom into his open-mouthed chewing) and the hyper-real atmosphere of a world that both doesn’t believe in vampires and seems rather non-plussed when confronted with their obvious existence. Jay DeVon Johnson (as Sheriff Hess) steals many scenes in this vein because he’s so calm and collected against the craziness, infinite blood sprays, and self-awareness to know when a badge becomes worthless next to a crucifix. That variety of entertainment inevitably proves enough.