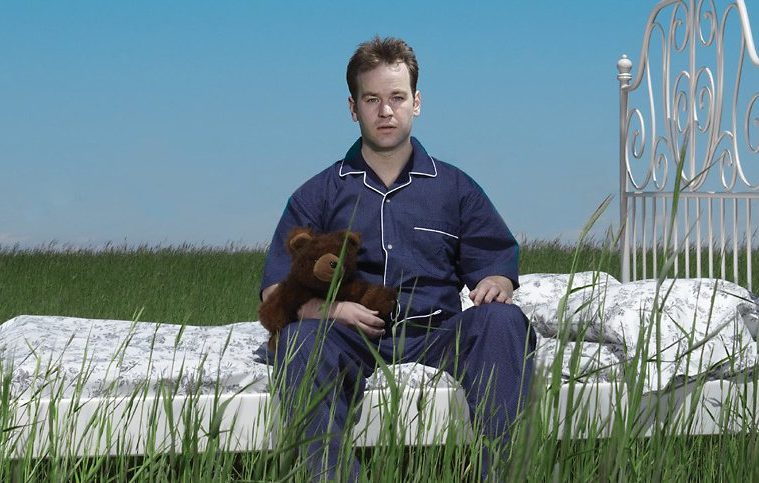 [Interview] Mike Birbiglia On Crafting His Directorial Debut ‘Sleepwalk With Me’ Many already know Mike Birbiglia from his stand-up specials and comedy tours, but his first feature, Sleepwalk With Me, premiered at the Sundance Film Festival earlier this year. Stepping into the acting spotlight, while also writing and directing the film, Birbiglia makes first-time filmmaking look seamless and easy.  Sleepwalk With Me also debuted at South By Southwest where Birbiglia and the producer of the film, Brian Bedol, were kind enough to sit down with me to discuss this very endearing and funny film. Check out our conversation below. Can you tell us more about the script writing process?

Mike Birbiglia:  The script process was about two years.  There was a bunch of shifts. My brother Joe Birbiglia, Seth Barrish, who directed the one man show, and Ira Glass, who I developed a lot of stories with over the years for This American Life.  Yeah, it was interesting because as I was watching the film last night, I was able to have some distance from the film and go, ‘that device worked there, that writing device worked there,’ you know? Things like that. I read in an interview — no it was in that PBS special about Woody Allen, where he talks about editing a film is basically like survival. You want to make something that people can just watch, at all. Then if it’s good, you’re like, ‘oh it’s good?  good news.’ I just wanted it to not be embarrassing to show people. You have rough cuts along the way that are just like, ‘this is a complete calamity, we really made a mistake by working 1000-1500 hours on this movie.’ I’m pretty happy with the writing. It went through a lot of drafts. There were like 20 drafts.

Did you leave any room for ad-libbing or did you try to stick strictly to the script?

MB: Yeah, I would say the people that have the most ad-libs in the film are Carol Kane, that stayed in, and Sondra James who plays the agent Colleen. Actually, Wyatt Cenac has that great story about performing in the parking lot of a Home Depot and that’s his story. We shot a bunch of stuff that was scripted, but then I was like, ‘let’s shoot just stories that you guys have if you guys are cool with that.’ Those guys are my friends, Wyatt, Jesse Klein, Henry Phillips, and that’s why I got them because I wanted that.  It’s really important to me that that scene is about, ‘these are his friends now.’ This is a guy that kind of has no friends. Really he has one friend, his girlfriend. He knows secretly that that’s not going to last. It’s a very lonely experience for him. He feels very small in his existence. Then he starts meeting people on the road and I really wanted that to be exciting. That’s the first time in the film that we’re handheld and we really wanted to make that fun. What was it like working with a first time director?

MB: Brian can probably answer that one better. One thing that I learned before I pass the baton. Things that you can say in theater, you can’t really say in film. Like you can’t say the phrase, ‘I don’t know,’ because the moment you do, there’s sixty people around you saying, ‘well if he doesn’t know, what the hell are we doing here?’ In theater, that’s an entry into a portal of creativity saying ‘I don’t know.’ It’s like, ‘ok, what could that be?’ And man is that not the case in film. I learned that really quickly.

Brian Bedol: You say that in film and everybody makes a B-line for the craft services table. ‘Oh we better get a coffee, he doesn’t know. If he doesn’t know it’s going to be 40 minutes at least, before we get this shot up. I’m going to take a cigarette break’. You learned that on like day one though (laughs).

BB:  There’s such a stigma around first time directors, ‘oh, this guy is just going to show up and he’s not going to know what he’s doing and he’s not going to know what anybody is supposed to be doing’. I think a lot of crew has this idea, ‘he doesn’t understand what I do’. That just wasn’t the case with Mike. After the first day, even before the first day actually in prep I knew. I knew after the first day of shooting, ‘oh we’re going to be more than fine.’ I think it comes with prep and Mike really did his homework and prep. We had the luxury of bringing on some really talented crew members so we were able to really start working with them right away. With our cinematography, Adam Beckman, and our locations manager, Chris Carmody; Chris was able to get us into locations we wanted to use for the movie in prep, so Mike and Adam would go in and work through an entire scene and shoot it on a still camera so that when we would get to set we would just open this binder.

BB: It was really helpful in that way. You kind of know what you’re up against because there is a learning curve, but we did things like that to try to mitigate what that would be. The other thing that was really difficult was, it’s not just a first-time director, it’s a first time director in front of the camera. So it was like, ‘how are we going to do that?’

MB: Which can go either way. You hear horror stories about that and you hear great stories and this was a great story.

BB: One of the things that Mike did was he brought on Seth Barrish, who had directed his stage play, both of them actually. He worked with Mike to help shape the performance and the character and was on set being really in tuned to what was going on.

MB: He’s an acting teacher in New York.  He’s the artistic director of a theater company called the Barrow Group and he’s written a book about acting so it was really important for me that someone was watching my performance. I was comfortable watching everyone else’s performance, but I wanted to make sure it was funny. It wasn’t everyday where we had to spend a lot of time on my performance. It was like every few days or every five days there would be like one scene where I was like, ‘no, I have to get to this certain emotional point for this scene,’ so it was really helpful that Seth came on. BB:  Absolutely. There were moments from the beginning too. I knew it would be fine because Mike spoke like a director. He spoke a director’s language. He comes from such a strong story-telling background. If you’ve listened to his ‘Sleepwalk With Me’ on CD or seen any of his specials or even the book, its like, ‘oh, he has a really good understanding of what makes a story strong.’ He also has a pretty extensive film knowledge. Just having the initial conversations with him about what goes into making a movie, it was apparent from the beginning that this was going to be a great working experience and that Mike was more than qualified to do this and do it really well. We were really lucky that he has all those things actually because I’ve worked with first-time directors before and it’s hit or miss.  Sometimes it’s great and sometimes people show up day one and get really defensive and feel really entitled and loud and scream.

BB:  They don’t know. They’re insecure, they’re just insecure on what they’re doing and Mike wasn’t.  He just wanted to figure it out and wasn’t afraid to say, ‘I don’t know what this is.’

MB:  I’ve failed at so many different art forms that I knew I could also fail in film… successfully.  (laughs)

After seeing the film multiple times, is there anything in the film that you wish you could go back and change?

MB:  Actually, I started shooting documentary footage of my tour. I’m touring my one man show, ‘My Girlfriend’s Boyfriend,’ which is my next one-man show that I did off-Broadway last year and I’m on tour with it now. I’m going around the world. I’m going to London in May and I’m still working on it even though we ran it in New York, we got reviews, we got an award. It’s done, but it’s never done. I feel like, until somebody rips something out of your hands, you’re going to keep working on it. If we weren’t picture locked and sound locked, yeah, I would still be in there. There’s a ton of stuff. I don’t mean to be vague, but I could tell you something in every scene. We shot the film so recently, I remember living the takes. I remember them that crisply. It’s a strange thing to go, ‘I remember that exact moment and it’s going to be like that forever.’

Sleepwalk With Me hits limited theaters on Friday, August 24th.