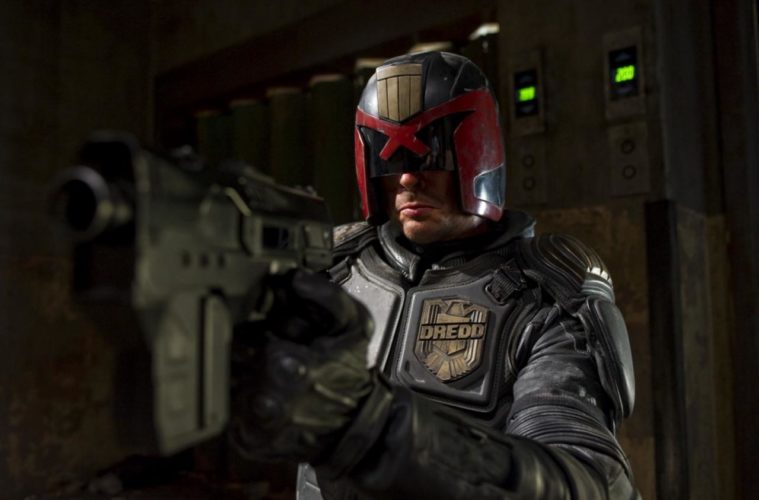 Dredd might be one of the most straight forward, no-BS action films that will come out this year. That pays dividends when portraying a character that is a man of few words. The comedic beats are even enhanced by this characteristic, and the action comes on fast and furious. From the get go, the tension builds and builds. Sure, you may know certain beats, but everything is pulled off with a flair and love of the material that simply works. Ultimately, I challenge a genre fan to walk out of Dredd and ask for their money back. On that note, star Karl Urban and writer Alex Garland gave me a few minutes during Fantastic Fest to talk about the problems caused by psychics being in the film, the budget’s effect on the film, what they planned to see in Austin, and the helmet.

So you are here for just a day or a day and a half.

Do you come to Austin and say “Besides working, this is what I wanna do in Austin”? Do you come with the idea that you wanna go to a restaurant or see something specific?

Garland: There’s something I wanna see.

Garland: I wanna see these two million bats fly out from under this bridge.

Garland: About sundown. That’s what I wanna see.

That’s it? All right. That’s simple.

Yeah. So in the film, you’re obviously wearing a helmet throughout. I’m curious about the genesis of the helmet itself because you read about these superhero films and how they have to wear spandex and how they have to wear all these intricate costumes. Really, your main thing is that, you’ve got a helmet and that’s it. Did you get really picky on the fit and things like that or did they give you a helmet and you said “it looks pretty cool” and you wore it?

Urban: It was just a process of trial and error. We wanted the helmet and the whole uniform to be reflective of the environment. It’s a brutal world; these guys get shot at everyday just riding down the streets and so it had to look protective. So we went for that kind of look and I think it really adds a lot. It’s informative. And when you see the violence in the film and the state that humanity is in then you get it.

Garland: And it’s based on the one in the comics and that’s based on like a Roman soldier’s helmet or a Viking helmet. It’s a combat thing. You started writing this script, if I’m not mistaken, around 2006.

So this material, this comic book, has been mined twice for two different movies, both very different. This is a different take on it. What do you think it is about Dredd that has caused there to be two movies that exist based on this material? Why do people keep coming back to it?

Garland: It’s just a cracking story. It’s a very hard-core kind of sci-fi. It’s action driven except, at the heart of it, is this character, this guy, Dredd, who you feel like you hardly know him at all but you get these tiny clues and insights. And after a while, it’s like you finally discover you really know him well. He sort of snuck up on you in some kind of way. And he has a history of character like that. You can see him played out with things like Mad Max, with Dirty Harry and Westerns. In Westerns, the guy just doesn’t talk much. What he says is only what needs to be said. He’s got his own dry sense of humor and then he kills people.

So the film, from my understanding, was filmed on a lot of practical sets. You went to Johannesburg and a lot of other locations. That obviously helps put reality into the film but how much appreciation did you have that this wasn’t a CGI fest or something like that?

Urban: It’s always more accessible as an actor when the elements are there, when you don’t have to use your imagination. You can just be in the moment and react to the environment. I think the fact that we did shoot in all these different locations really enhances the realism of the film. Those environments, the city one, the peach trees, really come to life and it’s not a huge leap of your imagination to understand that that’s where society has gone.

The film has a proposed budget of about $45 million but when I watched the film I didn’t realize that it was a $45 million dollar movie. It looks really good.

Garland: We made it for less. I’m glad you think that. Did you notice any kind of short falls or was this just a lean, mean production?

Garland: As a production it functioned, although it was sci-fi and had big money shots, it functioned like an independent, low-budget movie. That’s the area where I typically work and the whole ethos behind it, the way we worked, the atmosphere on the set, the way the actors and the crew get along in a particular kind of way, in a way everyone kind of has to give more than their supposed to, other wise we’ll never get it done. It’s the process of a low-budget independent movie. We had no resources. We made the resources stretch as far as they possibly could and a lot of that, to be blunt, is from good will. It’s from people like Karl saying, “Yup, I’ll stay late. Never mind about the turn around.” It’s from the crew doing exactly the same thing. The VFX guys, our full VFX budget was the same as like a handful of shots on a lot of movies, and they just kept working, they did it on their own time in their own way. They made a loss; they just wanted to do it right. So, the atmosphere was definitely a low-budget, independent movie. It was an independent movie but we were up against the wire the whole fucking time. The whole time.

Garland: Well, not exactly. It was a nightmare.

(Laughs) So, Olivia Thirlby’s character, and I don’t know if this is a spoiler but, we’re gonna talk about it anyway, she’s a psychic. There’s little tidbits throughout the film where you kind of set the rules and you set the game but, obviously, you are making these rules. So how hard did you work on trying to basically set out an outline of how limited her power was or how far she could go?

Garland: That’s a very interesting question because it’s a nightmare. There’s two things in story telling, in Sci-fi, that can be very problematic. One of them is time travel. Time travel can get you into a lot of logical plot problems very very quickly. And another one is psychics. A psychic cop…you don’t need a detective story because they’re psychics, they can figure out the crime very quickly. We created a bunch of parameters for her power to do with proximity. She needed to be nearby. And the way we rationalized it was kind of like a bad radio frequency tuning. So maybe you’ll catch one word out of three. So you’re getting the gist of it but you can’t be that precise and you’ve really got to zone in and concentrate to figure out what people are thinking and that was how we approached it. But it leads to some nice moments. There’s a lovely moment in a lift, a kind of exchange between Dredd and Anderson and about her psychic power which, really becomes a character beat for Dredd because Dredd is aware of everything she’s aware of, out of his sort of street skills, as opposed to his psychic power, she’s got the psychic power but he can read it anyway from the little tells. One thing I appreciated is that, I’m watching the film and she takes off her helmet and, immediately, I’m thinking to myself, “why isn’t she wearing her helmet?” And of course, the internal logic in the film, it plays out and you get your answer and it’s like, “Wait! I just asked that question in my head and you’re already answering it on the screen.” And so I really loved that. There are those little things where you’re asking yourself, “Wait, why is this happening?”

Urban: I’m glad you picked that up because I read one review that totally didn’t get that.

Garland: Also, by the way, one of the things, in fact, Karl and I did it, we sat down together and went through every single beat, every single moment and tried to justify it. To understand exactly why it’s there. You could say it’s partly a working method but it’s also a consequence of having no money. If it’s gonna be in the film, it better be earned. Actually, even while shooting, I can remember walking off of a set and Karl would be saying, “Well, why is this like that?” and would sort of continue to question it. Sometimes I’d have to get back to [Karl] like two days later because I’d think, “I don’t know, I have no idea.” So I’d have to think of some rationalization. (Laughs)

You’ve talked a lot about how half of your face is not visible in this movie. The lower portion and the grimaces and things like that are gonna be key. The inner child in myself is thinking, “Did you do this and stare into the mirror and just make a bunch of faces?” How did you-

Urban: That’s interesting, I mean, everybody asks that but firstly, you never do that as an actor because, if you do that, you’re only just looking at yourself. You’re not looking at the character of Dredd. So, that would be a complete waste of time. For me, my approach was grounded in the research that I did in the comics and then in the script and just being in the moment and servicing the character to the best of my ability and it was important to me that the character be identifiably Dredd. If you notice, in a Dredd Comic, he’s always drawn in a particular way. So it was about being faithful to that.

Garland: You know, me and Lee, after we met we thought, “Okay this guy’s great, completely get’s it.” We were very in sync. Karl spoke a lot about the character and just understood 100%. We then got bits of paper and photos of you and stuck it over your face, trying to figure out how it would work. So we did that.