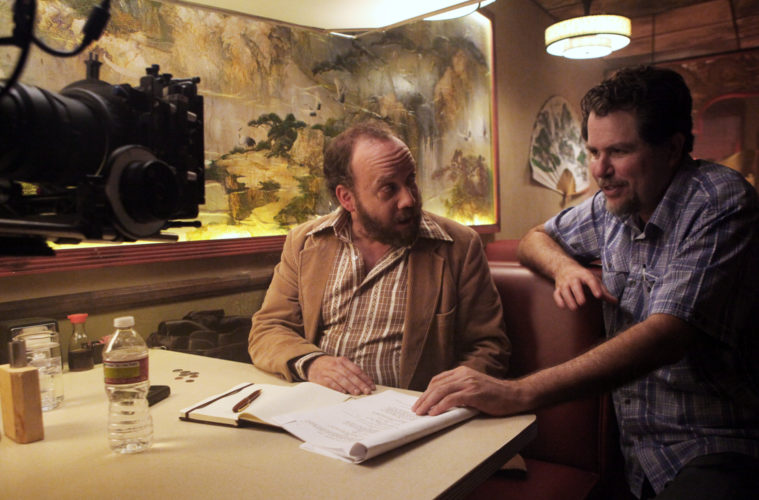 There’s no getting around the fact that Don Coscarelli makes some odd films. After his latest project, John Dies at the End, toured the festival circuit for nearly a year, it is finally getting a release on VOD and will hit theaters in limited release later this month. When I caught up with the director at SXSW in March of last year, it was the morning after a hectic day where he had just screened his new cut of John Dies at the End at midnight.  The film follows a man, Dave, who is brought into a wicked, mind-bending adventure where he has to make enormous decisions to save the world. Together, Coscarelli and I discussed the non-linear format of the film, his reluctance with midnight screenings, how his new cut differs from his Sundance version, and much, much more. Check out the interview below.

Oh, the way the book, the section of the book that I took, you definitely have the interviews in a similar situation. What the book didn’t have is where we did some flashback thing to where they met the girl and then she turned into the snakes and then is eaten after. There were some challenge there to how to fit it in but I just did it. Hopefully it was the right decision but I just didn’t let myself be so worried about it because I think that at it’s core the story is about shifting realities, and I like to think that the audience is gonna be able to stick with it.

Yeah, and obviously some of the most successful independent movies really play with their structure, and, going back to Pulp Fiction and even Reservoir Dogs and yet the critics that are talking all the time about Quentin’s structure, but they’re really talking about his audacity and all that, but he’s always had a great ability to, or I should say, had the confidence to shift around with structure and let the audience follow and they do. And so I like to think that what we got going in John Dies, combined with the fact that it’s basically about a [interesting] street drug, it pops from dimension to dimension, hopefully it works and people weren’t too lost. [Laughs]

Going back to that, it is kind of interesting to watch it kind of unfold and see where it goes. You didn’t shoot in sequence, right?

No, no, no, we had the guest actors coming in from time to time and so we were really, it was a very technically mundane thing with their scheduling, so that really determined how the schedules worked. But keeping track of it, you know, when we were jumping around, wasn’t easy, and there were moments when sometimes the lead actor Dave, Chase Williamson, would grab me and go, “Don, where are we here?” “Okay you’re right. Let’s take some time, reset, this is when you go back through.” Then we would do our own little linear examination so we would know where he was. Yeah, it was challenging though, I had forgotten about that. You premiered it at Sundance and you mentioned last night at the screening that you weren’t very happy with the cut that you ended up showing over there and the final special effects and things like that. How much did you change and did it effect the run time or was it more just particular shots and switching things out and just making it run a lot smoother?

I think it was a function of just… the cut was a little loose. There were things that I really wanted to tighten so I went back. It was streamlining things a little bit by making it play a little more aggressively and so we probably dropped about seven minutes from that previous cut, but I don’t know that we really cut anything. It’s not like we cut a whole scene, it was just more of a pace thing. The problem is that I’m a tinkerer. I have movies that I made 25 years ago that I’ve redone a couple times and probably will still be re-cutting before I go. The thing is, a movie in a director’s mind, at least in my director’s mind, is never done, because I’m still formulating things and wondering how I can do things differently. I’m always looking for an opportunity and I just decided to take this after that screening and really finish up those visual effects and just focus on the pace a little bit. Did it feel like the pace was okay to you? In terms of speed?

At the beginning, yeah. I was fully following along and keeping up with it and it did throw you for some loops here and there, but those are intentional, those aren’t mistakes, so it played fairly loose. I have to admit though I did catch myself falling asleep. Part of that was just simply, I’m crashing. So the midnight screenings —

No and on top of a whole day it’s… the funny thing is everyone embraces the midnight screenings and I am looking forward to having a regular screening. And the other festivals we’re slotted in, I know we’re gonna go to the Florida film festival in April, they’re doing a midnight screening. So you know, it’s weird. It’s like stereotypes. I think it’s a movie that you need your full faculties for.

I will agree with you there. There are a lot of midnight films that play very straightforward and they’re easy to follow and if you fall asleep and then wake up you’re like “Oh we’re still here.” But this movie, you fall asleep for a minute and you’re like “Wait what the hell is that pillar doing?”

I think that, as with the book, it’s really dense stuff and everything’s there though. A lot of people ask me questions about stuff and I frequently reconfirm like “in minute 21 we explain that, you gotta listen to it a little closer.” So I like to think that the movie will hold up to the second viewing and might even demand a second viewing.

From my understanding, the book has a larger portion for Amy’s character, and someone mentioned that yesterday. Was her role in the film cut down, was it never all that big or was this just that section of that book where she wasn’t all that particularly big?

That’s probably closer to what it was and the other problem was that there are actually, he had another female, or romantic girlfriend, who was, actually I think her name in the book was “Jennifer Lopez.” I don’t think her name was Jennifer Lopez but he referred to her as that because she sort of looked like Jennifer Lopez. And so I grabbed some elements of that and tied it in together but we didn’t have the time for two different romantic involvements. So yeah, she was a bit of a peripheral character but obviously she couldn’t be eliminated entirely because she was the key to opening the door with her ghost. So that was something from the get-go from the book that I really wanted to show. One of the parts that I thought really played well and worked well last night was her acting moment was quite wonderful, where she sees the ghost for a minute and kind of sees what’s going on.

You mentioned earlier that you still tinker with a lot of films.

Well, what I mean is, like I did this movie Survivor back in the ’80s and I did an original cut and then we got another distributor so I cut it again and then in I think about 2004 it finally came out on DVD, but before I gave it to DVD I went in and did some serious re-editing on it and then I watched it maybe two years ago and I went “huh, next time they put it out, I’m gonna make even more changes.” So continuing to evolve it.

So is that the one that kind of keeps following you around, or is it just because it keeps going up for distribution?

It’s a movie that’s got big problems and problems are challenges and truthfully making movies is like solving a puzzle; you have all these pieces. You know, especially editing, you know sorting them all and putting them into a fashionable place. You know, a puzzle might take a lifetime to solve so in that movie it’s always still ongoing. But lately, you know, I’ve been in the editing process with John working on this puzzle and I’m feeling pretty good about it.

John Dies at the End is now on VOD and hits limited release on January 25th.