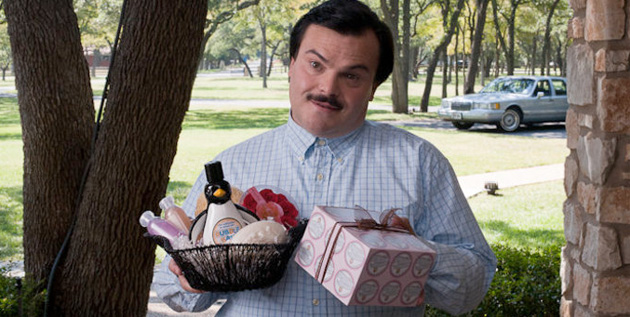 [Interview] Jack Black On Going To Prison, Playing a Murderer & More For ‘Bernie’ Bernie is a troubling feature to sit through. This is a dark comedy that morphs half way through into a trial farce of sorts. Should we laugh at these things or just shake our head at the absurdity? Yet Richard Linklater‘s latest Texas-based film is actually rooted in a true story that played out in public, making it is even more troubling. Thankfully, I had the opportunity at SXSW to sit down at a roundtable with Jack Black, who plays Bernie, to discuss how he developed his version and much more.

How does it feel to join the ranks of Jack Lemmon and Jack Nicholson who’ve romanced Shirley MacLaine on the screen?

Jack Black: You know, it’s a lot of pressure. Those are some powerful Jacks. I feel like the third Jack on that list. Well, I’m definitely the one-eyed Jack.

And you give her a foot-massage so that’s even more intimate than a love scene according to Pulp Fiction rules.

Is that what Pulp Fiction [says]? They say a foot massage is more more intimate than intercourse? Yeah. And I didn’t just rub the feet, I also buffed and shined them. You saw, it was a full on pedicure.

Did you spend any time with the funeral director to get some of those techniques down pat?

I talked to a mortician but I was not allowed to go in to see the corpses. I wanted to, there’s rules against it, but then I heard later that Lindsay Lohan was doing work with corpses and I was like, “how did she get around it?” She’s just a pretty lady, I guess. I don’t know. Is that it?

It’s part of her service, her community service, working with them.

Right. OK, well I didn’t have that deal. You seemed to really embrace Bernie. Do want to talk a little bit about his character?

It was something that I’ve never done before. The script as a whole has, obviously, a very dark theme, and its funny but its very dramatic and there’s a lot of pressure playing a character whose based on a real person, someone who has got a lot on the line. They’re in prison and you’re gonna tell their story and there’s a hope that this doesn’t make me look bad, so you’ve got that in the back of your mind the whole time; you wanna do justice to the guy’s story. It’s a tricky spot to be in, when you wanna be funny but this is a person’s life you’re playing. So it’s a little dance you do with respect.

Bu it was amazing to go meet him in the prison, the maximum security prison. It’s just intense going to a prison, I’ve never been to one before and the five security check points, you get scared. You’re going in you’re like, “I don’t know if I’m ever gonna come out of this place.” And there’s some rough characters in there, there’s some serious dudes in there with lots of face tattoos and lots of heavy stories around every corner you’re like, “Wow, there’s like a hundred movies in there waiting to be made.” And then you see Bernie and it’s so incongruous because all of a sudden there’s this sweet like angel of light. He’s just this gentle giant in there I’m like, “what are you doing in here? Yeah, you had one bad day.”

That’s really what it comes down to, and that was Rick’s feeling abut the whole story, and he had been obsessed with the story ever since he went to the trial. He read a little story about it and then he went to the trial because he was so curious about it and ever since then he’s felt like this guy was not a monster, that the fact that he was the most loved guy in the town was a real reflection of who he was as a person and that if he could commit murder, maybe anyone could under the perfectly wrong circumstance. That’s the goal of the movie is to communicate that. I don’t know if we did. I hope we did, but going and visiting him there definitely confirmed that feeling that this guy was actually a great person that just snapped.

Was there a feeling of sadness in Bernie, or is there more of this is what happened and I’m gonna move forward from that?

Bernie is still Bernie. He’s still the most loved person in the maximum security prison. Everyone loves him from what I could tell. Very popular, not only with the inmates but with the guards and the staff there. He’s leading bible studies and teaching cooking lessons and is just very involved. But he definitely is isn’t totally happy with the living conditions, it’s tough. No one has sympathy for prisoners, because you know they’ve all committed horrible crimes and they shouldn’t have a comfortable existence necessarily. But at a certain point it does turn into cruel and unusual punishment in his mind, because people are just getting sick, just from eating Doritos, and its just pure junk food, like the prisons have some sort of a deal with these junk food [companies]. Coca-Cola, yeah. So that’s all they’re eating and he’s got diabetes and they’re all getting sick and eventually it ends up costing the tax payers more because the medical bills are way higher than it would cost to just mix in a cup of fresh fruit and vegetables for Christ’s sake. That was his main bummer. He was mostly bummed that there wasn’t anything healthy to eat. He just wanted his peeps to be well-nourished.

What about getting into that “small-town Texas” mind set? Did you do any preparation in that way?

He was a public figure, so it was good that I was able to get a lot of video and audiotapes and just listen to him a lot and try to get into his voice. That was my way in.

So you focused on him?

Yeah, I focused on him. I didn’t go to Carthage, Texas but I came out here for a few weeks and worked with Rick and that was it.

You nailed the Methodist Church. Did you go to a service?

I did. We went to a couple services and I loved the music. I actually was really into the gospel songs, especially that, have you ever heard Jim Nabors, I didn’t know that he was an incredible gospel singer. He’s got a powerful, baritone bass voice.

He actually trained to be an opera singer.

Yeah. Blessed Assurance was probably my favorite songs. And he does an incredible version of that. But yeah I’d never really explored the gospel music before so it was cool.

In this movie, you have a lot of great scenes with Shirley MacLaine. Kind of that, loveable guy/hateful bitch. Can you talk a little bit about your relationship working with her?

Well, she didn’t want to play a straight up hateful bitch, she didn’t read it that way. When she read it she was like, “You know what, f*ck these townspeople. They’re a bunch of gossips. She’s not a bitch, she’s right! And I’m gonna play it right. And when people see this movie they’re gonna say, ‘you know what, she’s right I’m on her side’.” And that’s what was good, when you get someone who’s playing a character you want them to be on the side of their character no matter what their position is. You gotta be rooting for yourself, even if they’re a villain. She had Margery’s back, and that makes for a good battle of good versus evil.

Was that always on the page, in terms of the relationship you two had and how you worked that out on screen?

We talked about it a lot. It wasn’t explicitly on the page, but that’s stuff that we talked about. She didn’t want to be like Nurse Ratched, where she was just a straight bitch. She wanted to have some sweetness to her, too. I’m curious when you went to visit Bernie, he’s been in jail for a while. Did he know who you were?

Yeah, he had been in prison for twelve years, so he was not aware of my career at all. School of Rock was before that and that’s how he would have known who I was but, no. I was going there to try to just soak up some of who he is and part of me was trying to get his blessing, to do the thing. You’re going off to play someone’s life and reassure him that it was not a smear campaign. That there was gonna be some comedic elements, but it was not gonna be at his expense. Because he was a little quizzical.

He said, “when they told me you guys were gonna be making this movie and it was gonna be a dark comedy, I didn’t really understand what’s funny about it.” I say, “no, I know it doesn’t seem funny from you being in it, but it’s not so much funny.” I explained to him, “it is just like amazing. Like, how did that happen?” But he was into it by the end. He could see where we were coming from, what we were doing. But I remember just sitting in the room. They gave us a little room where we could just sit and talk to him, interview him for a little while.

I was feeling very nervous, just being with a guy who’s gonna be in there another twenty years, and the pressure of the situation. He’s thinking “please tell my story right, please don’t make me look like a monster, I’m not a monster.” I started to feel a little faint, I felt like I was going to pass out at a couple points in there. I felt like my hands were getting really big and swollen. Its hard to explain but I was having a slightly out of body experience during the interview.

What made you decide to take on a character like this?

Well, it was really Rick. It was his passion project that he had been thinking about for so long, and it was a challenge. It was something I’ve never done before and I’m attracted to that kind of story. I like a little darkness in my entertainment. I find it more interesting, maybe a little bit more honest. So it was cool it was something I wanted to do. And also, I would’ve done it I think, to work with Rick again. He’s my favorite director to work with, from School of Rock and I’ve been looking for something for years. We’re trying to do School of Rock 2. We’re working on that but, I’m sorry we don’t have a script yet. Hopefully someday it will come.

What kind of director is he? It sounds like he is very hands on with the actors.

He’s a real worker. He doesn’t just show up on the set and go, “alright, good to meet you all. Let’s start shooting now.” He likes to do his due diligence we’re all reading through it a month in advance, we’re rehearsing it a lot. It’s a lot more like we’re rehearsing a play and when we start shooting that’s opening night, which is a great process. And none of the directors that I’ve worked with have been into rehearsing like that. He’s the only one. It goes against the grain of most productions.