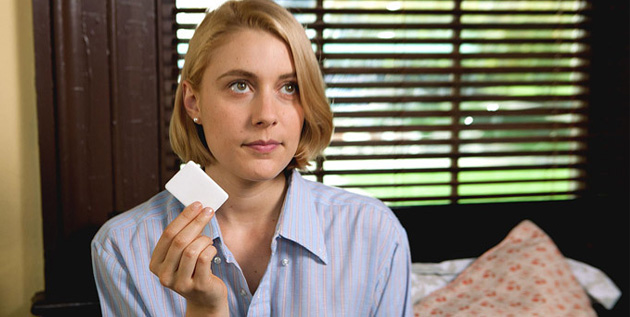 [Interview] Greta Gerwig On ‘Damsels In Distress,’ Auditioning & Her Next Directorial Effort She wasn’t there, and then she was, as though someone had decided she was to be the next indie “It” girl. And here she is, Greta Gerwig, to stay, continuously proving her diversity as both a performer and a filmmaker at large.

The Film Stage got a chance to sit down with her and discuss her new film, Damsels in Distress, as well as her do-it-yourself path to making movies with Whit Stillman, Woody Allen and Noah Baumbach, her struggle with being ‘too confusing’ in auditions and acting in a film where the dancing came more naturally than the words on the page.

TFS: You come from a “do it yourself” world of filmmaking. You made a lot of films which you wrote, helped direct and acted in as well. Coming from that world, how did break into this new world of Whit Stillman and Woody Allen?

Auditioning. I got an agent pretty soon after Hannah Takes the Stairs was at South by Southwest and I started auditioning for everything that was casting in New York. I went to television auditions, film auditions and really, really tried very hard. And failed mostly because I guess I wasn’t that cast-able, in a certain way. I was, I’ve always been, kind of specific. Most of the time when you’re looking for someone [to cast], you’re looking for someone who kind of blends in, not necessarily someone who seems like they’re going to draw attention. Especially for television; the day player roles you want someone who just looks like they’re answering questions, not too confusing. And I think I always was a little too confusing. Were you able to take “too confusing” as a compliment?

No, I was not able to take that as a compliment. I took that as I was failing and I thought I really wanted to be cast, and so it was difficult. But, then I got better at auditioning, as a result of auditioning. So then when I sort of came to a point where I was up for things that were bigger that I wanted, I was better at auditioning and really everything. All of the bigger auditions that I started to get, I started to get because when you first start auditioning you audition for only casting directors and you very rarely get to audition for the directors with the other actors because of part jumping. With movies that I had made, either written or been very involved with the improv of like, Hannah Takes the Stairs and Nights and Weekends and Baghead, House of the Devil, like those movies were the movies that bigger directors saw and then said, ‘Oh I really like you, and I want you.’

It’s like getting called up from the minor leagues into the major leagues in a way, like that moment when you could be just on a, whatever, Triple A team or Double A team – I don’t really know about baseball I’m just making this stuff up. It was a very fortuitous thing that people found something interesting in [those films] and they had enough circulation that bigger directors could see them and that’s what started getting me these auditions with directors. And that was really important because, I don’t think I would have gotten there through the traditional route at all. I would have never gotten there. Whit’s scripts have a very specific language. How is navigating that as an actor?

That’s one of the great pleasures of it is that it’s a different language. I mean, despite the fact that Noah Baumbach’s scripts seem very naturalistic, they are very scripted. He wants everything said exactly as he wrote it. So I had already had that experience and Whit is the same way. He wants it exactly as written. There is no improv, you don’t really get a chance to contribute to what it’s going to be like. But that’s why it’s so great. I mean it’s like a complete challenge but it’s thrilling to sync into somebody else’s world like that. And I really enjoyed it. I had a great time and I think the biggest thing for me was trying to get the other people’s voices out of my head who had done his words so well, like Chris Eigeman or Kate Beckinsale. I didn’t want to do an imitation of the way they had done the movie, if that makes sense.

How did your college experience compare to the one depicted in the film?

Not at all. My college experience was so different than this. I went to an all girls college. I went to Barnard College for women, which is the women’s college at Columbia. I mean I had an extraordinary college experience. I loved it. I loved every second of it. In some ways it was almost the opposite of the movie. In the movie I play a girl who’s trying to transform the world around her because she finds it depressing and in my college experience, I came to college and I, all I wanted to do was be like the people I met because there were women who were just so extraordinary. Was there rehearsal time for this movie?

Very little. Yeah we had a couple read-throughs, we had a little bit of rehearsal but not much. We did a lot of dance rehearsal, was a big thing.

Was that a first for you?

No, I grew up dancing.

So you were able to just jump right into it?

Yeah I was just right there with soft shoe. I loved doing it. The dance rehearsal was great because it’s a great way to get to know people. Just jump in and start dancing. I think it’s a great icebreaker.

Well, I don’t know. I have another movie that I shot that I’m going to be promoting starting at Tribeca, so in three weeks. It’s called Lola Versus and it’s being put out with Fox Searchlight and I’m very excited about that. I just got a lot of work that piled up and actually I’m kind of just doing a lot of that. But I’m writing a lot and that’s like the main project right now is writing…I wrote a script that I shot over the fall and winter which should be out sometime at the end of this year. I find a lot of fulfillment writing so, that’s kind of the direction that I’d like to continue to go in, in addition to acting.

Note: See the poster for her Lola Versus, premiering at Tribeca next month and in theaters June 8th, below via Vulture.