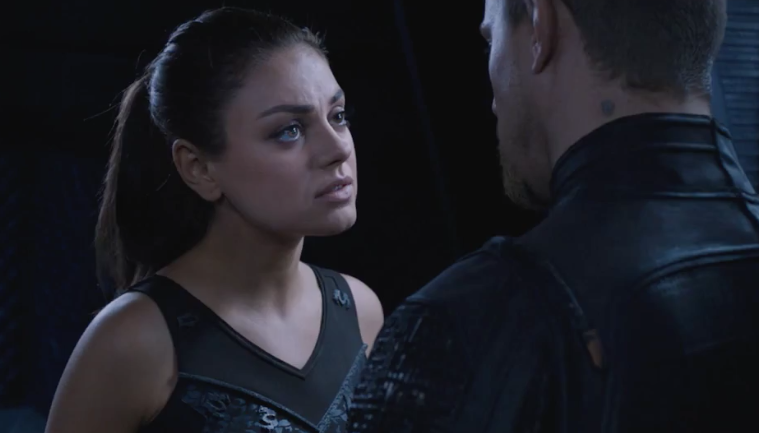 Remember this movie? Once set for a prime summer release, the Wachowskis‘ Jupiter Ascending was pushed to early 2015, the given reason being that over 2,000 visual effects not yet being completed, according to WB. Many chalked that up to studio-speak, with the studio needing to rethink their strategy after another $150 million-plus tentpole, Edge of Tomorrow, disappointed.

Well, now it’s time for the sci-fi adventure led by Channing Tatum and Mila Kunis to show its cards again as we have a new international trailer. Packing a surprising amount of new footage, we can see the studio certainly had more work to do. The story finds Kunis, a mere earthling, becoming an assassination target by the queen of the universe. Also starring Sean Bean, Eddie Redmayne, Doona Bae, Douglas Booth, Tuppence Middleton, Tim Pigott-Smith, and James D’Arcy, check it out below along with the poster. Channing Tatum and Mila Kunis star in “Jupiter Ascending,” an original science fiction epic adventure from filmmakers Lana and Andy Wachowski. Jupiter Jones (Kunis) was born under a night sky, with signs predicting that she was destined for great things. Now grown, Jupiter dreams of the stars but wakes up to the cold reality of a job cleaning other people’s houses and an endless run of bad breaks. Only when Caine (Tatum), a genetically engineered ex-military hunter, arrives on Earth to track her down does Jupiter begin to glimpse the fate that has been waiting for her all along—her genetic signature marks her as next in line for an extraordinary inheritance that could alter the balance of the cosmos. From the streets of Chicago to far flung galaxies whirling through space, “Jupiter Ascending” is written and directed by the Wachowskis.

What do you think of the new trailer? Was it a wise idea to change the release date?