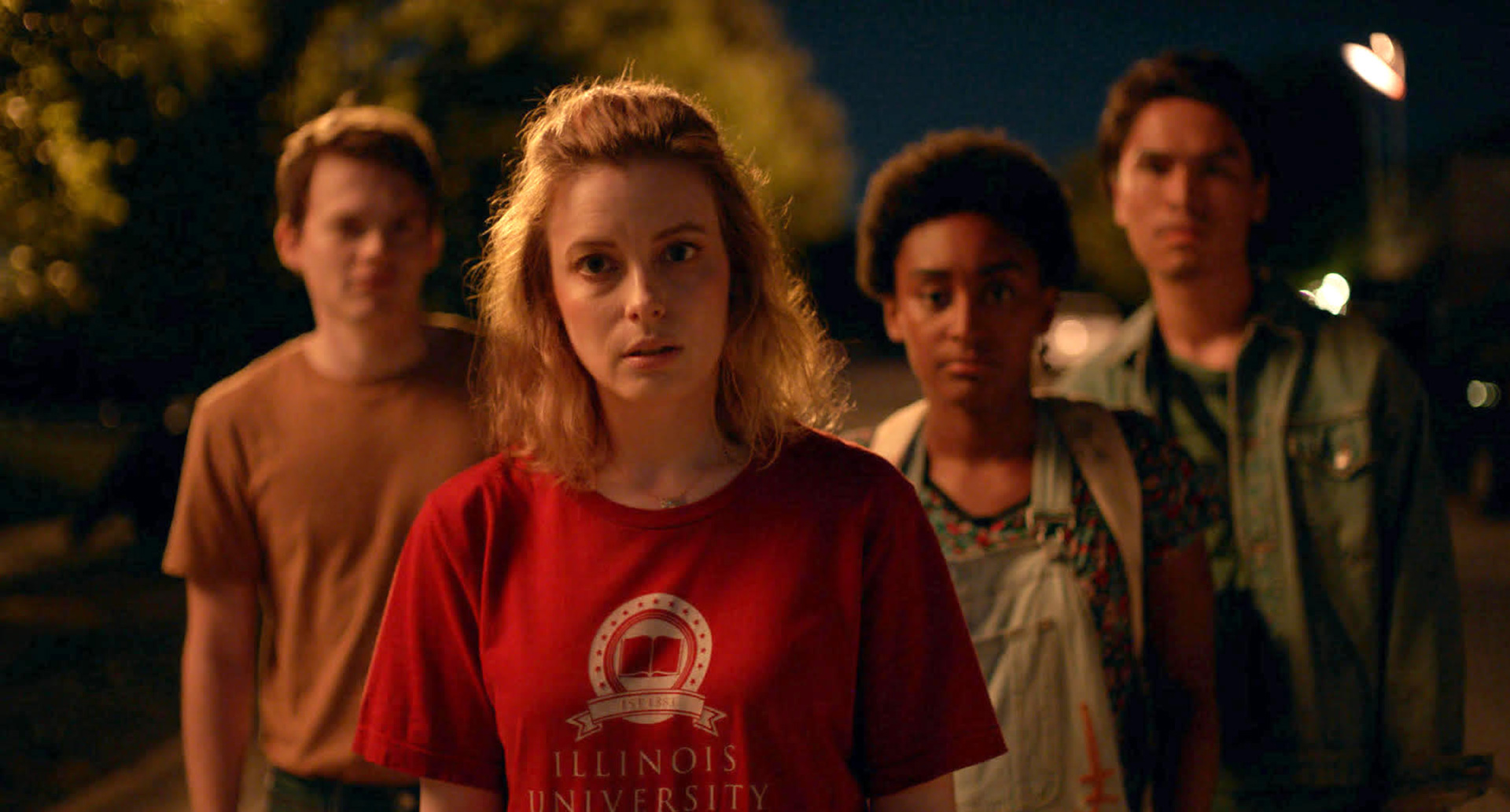 This was the week when Kate’s (Gillian Jacobs) dreams were supposed to come true. Her debut novel was releasing, her wedding was on the horizon, and a nationwide book tour was about to commence. Everything she worked for since college had finally bore fruit and you couldn’t blame her if she smiled with relief at a job well done. Except she never gets that chance. She receives a call from her publisher weeks after her engagement was canceled to hear the tour has been too. Kate’s book proves a financial liability nobody is willing to defend and her last chance at a distraction from what now appears to be a complete professional and personal implosion was gone. A voicemail from a former professor therefore feels like a godsend.

Writer/director Kris Rey provides her lead character this beacon of hope at the start of I Used to Go Here—a final chance for validation that couldn’t have come at a more opportune time. David (Jemaine Clement) was a huge part of what made Kate want to become a writer in the first place, so hearing his enthusiasm for the work and excitement to invite her back to her alma mater for a reading is just what the doctor ordered. Every bit of confidence she had lost returns while optimistically waiting for an impending New York Times review on the university grounds where this trajectory was born. Maybe she can be a mentor to this newest generation of students while turning the electricity of their youth into inspiration.

It’s not long before Kate realizes the energy washing over her is a contact high created by a mix of nostalgia and shattered dreams. The professor she once crushed on is married. The latest editor of the school newspaper (Hannah Marks’ April) has a written voice for which anyone would be jealous. And she’s trapped under lock and key of a domineering bed and breakfast manager while life flourishes across the street inside a campus-housing unit she once called home. It’s almost as if her past is taunting her by supplying this mirror onto happier times despite currently feeling furthest from them. So why not join the party and reclaim that spark amongst co-eds Hugo (Josh Wiggins), Animal (Forrest Goodluck), Emma (Khloe Janel), and Tall Brandon (Brandon Daley)?

While that might end up bordering on creepy or pathetic in raunchy comedies of yesteryear, Rey has the goods to balance this tragi-comic scenario in a way that allows it to be emotionally freeing as opposed to exploitative. Look no further than the contrast between Animal and Emma putting a halt to their sexual activities in order to troubleshoot Kate’s love woes (her ex-fiancé might be Instagram-official with someone else) and former classmate Brad (Jorma Taccone) making an evening of drinks awkward with the help of his friend Rachel (Kate Micucci). Rey builds this world upside down by imbuing the teenagers with a greater capacity for maturity and morality than the adults, epitomizing a college town ethos wherein a refusal to leave is also a refusal to grow.

She goes even further than that, though, by presenting the very real issues that women face within this sphere of academia/arts. Beyond many examples presenting the power struggle between male teacher and female student (and its potential to be sexualized) is the pressure to compromise voice for the sake of presumed prosperity. How much of Kate’s happiness has hinged upon an ideal fed to her by supposed experts rather than a pursuit of a version that she both desires and enjoys on her own terms? Success isn’t guaranteed by “playing the game” and yet her participation in the latter seems like it’s the only way to achieve a chance of finding the former. It’s a vicious cycle that keeps the mediocre in charge of silenced geniuses.

Does that infer Kate is a genius? No. We don’t yet know because she hasn’t been able to truly discover her talent’s full capabilities outside the establishment’s constraints (both David molding through academia and her publishers through the industry). What she does realize upon speaking to these kids (especially April), however, is that she’s slowly becoming an arm of that establishment—the very thing that has stifled her own art. It bleeds through her advice and the growing resentment she finds herself harboring towards students that should be giving her hope. In them she sees what she was and wanted to be, not what she is. And in Kate they see what they aspire to become without grasping how their image of her is partially an illusion.

As sobering as these dual revelations prove, Rey never lets the drama become so dire that the comedy suffers. Some of the humor ultimately arrives courtesy of absurd peripheral interactions that might offer more question than answers (I want to know more about Hugo’s relationship to his mother as played by Jennifer Joan Taylor), but these instances are funny enough to make us not care. Let Tall Brandon have an adventure all his own while Kate, Hugo, and the others partake in some ill-advised breaking and entering because doing so provides a welcome contrast to the heavier (albeit still funny) drama of the main action. It’s okay to laugh out loud during this climactic quest for justice and clarity because the lessons learned remain our central focus regardless.

The biggest lesson is of course that Kate isn’t yet depleted of the promise she held as a student at this school. Just because she’s fifteen years older with a novel that the world has rejected doesn’t mean she can’t still evolve. The establishment’s formula not panning out isn’t a death sentence. It isn’t a sign that Kate should give up. If anything it should strengthen her resolve and prove that the voice that got her here was superior to the one she adopted. And as Jacobs’ growing frustration exposes when those around her speak (friends, colleagues, trusted advisors), we sometimes need an outsider to remind us about what’s true rather than burying it in platitudes. Failure is merely an excuse to get back up and try again.

I Used to Go Here opens in limited release and VOD on August 7.