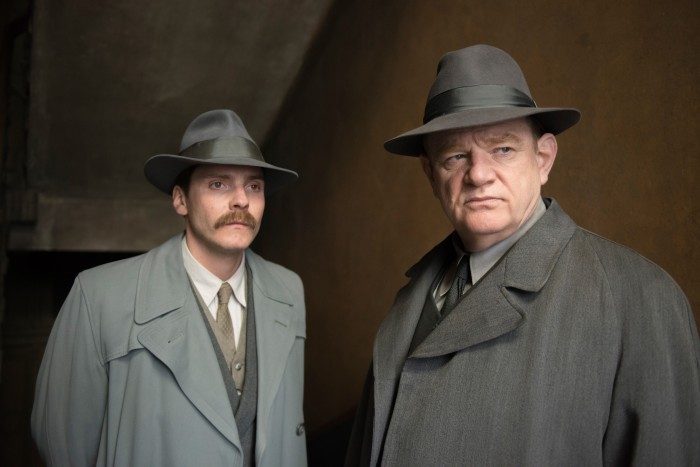 Shockingly, this awards season there is only one World War II-set movie — Mel Gibson’s Hacksaw Ridge — but there will be no shortage of dramas set during the era come 2017. While Christopher Nolan’s Dunkirk will certainly gain the most attention, early in the year, two dramas touring the festival circuit will make their way to U.S. theaters and new trailers have arrived for both.

First up, Alone in Berlin, starring Brendan Gleeson, Emma Thompson, and Daniel Brühl will hit theaters in just a few weeks. We said in our review from Berlinale earlier this year, “Director Vincent Perez sets the stage for what should be a compelling study of dissolution and grief, yet is never able to follow through with the skill or tenacity the material requires. Rendered in melodramatic and predictable images (a hand resting on a rail, a light going off in the window), Alone in Berlin doesn’t delve deep enough into the metamorphosis of the Quangels.”

How did an ordinary, middle-aged couple become a symbol of defiance against Nazi brutality? This true-life tale of courage unfolds against the tumultuous backdrop of Berlin in 1940. Otto and Anna Quangel (Brendan Gleeson & Emma Thompson) are a working class husband and wife doing their best to ride out the war. When their son is killed fighting on the frontlines, however, everything changes. They begin pouring their rage and grief into postcards emblazoned with anti-Nazi slogans, risking everything to disseminate their messages of protest across the city. But this seemingly small act of subversion rattles the regime, including a police inspector (Daniel Brühl) who will not rest until the culprits have been caught. Based on the bestselling novel Every Man Dies Alone by Hans Fallada, Alone in Berlin is both a gripping thriller and a stirring ode to resistance.

Then there’s 13 Minutes, the latest film from Downfall helmer Oliver Hirschbiegel, capturing an assassination attempt on Adolf Hitler two months after the start of World War II. We said in our review from Berlinale earlier this year, “Shedding little light on the circumstances of Elser’s failed attempt and even less on the broader history that surrounds it, 13 Minutes presents a redundant historical “what if” that leaves itself open to charges of relativization.”

Check out the trailer below for the film starring Christian Friedel, Katharina Schüttler, Burghart Klaussner, and Johann von Bülow.

During Hitler’s anniversary speech on November 8, 1939, a man is arrested on the Swiss border for possession of suspicious objects. Just minutes later, a bomb explodes in the Munich Bürgerbräukeller, immediately behind the Führer’s lectern, killing eight people.The man is Georg Elser (Christian Friedel), a carpenter from Königsbronn in the Swabia region. When a map of the site of the assault and detonators are found on him, he is sent to the head of the Criminal Police in the Reichssicherheitshauptamt,Arthur Nebe (Burghart Klaussner) and the head of the Gestapo, Heinrich Müller (Johann von Bülow) to be questioned. From them, Elser learns that his attempt has failed – that the man he wanted to kill in order to stop the bloodshed of the World War that had just begun, has left the Bürgerbräukeller 13 MINUTES before the explosion. For days, Elser is interrogated by Nebe and Müller, for days, he holds out against their questions. Until he finally confesses – and relates the story of his deed.

Alone in Berlin opens on January 13 and 13 Minutes opens on March 17.