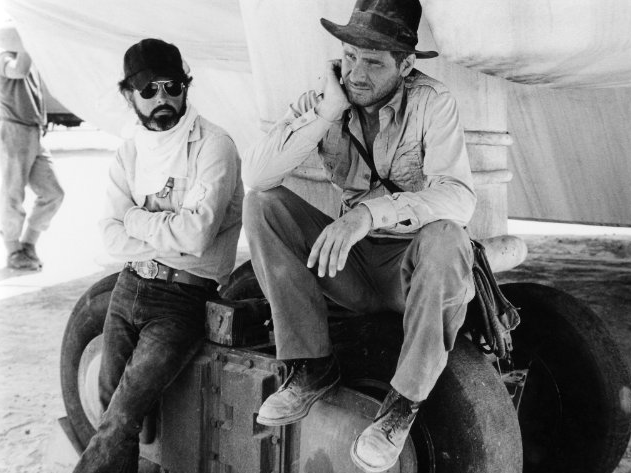 Harrison Ford: Where Did They Go Wrong? He began his career as “Harry Ford,” appearing in George Lucas’ American Graffiti, Francis Ford Coppola’s The Conversation and Apocalypse Now, before working as a carpenter when the acting gigs dried up. Then came Han Solo, Indiana Jones and suddenly Harrison Ford was one of America’s greatest movie stars, mixing a Gary Cooper-ish leading man charm with a distinct Everyman aura.

In the wake of a stream of utter disappointments (Six Days, Seven Nights, Firewall, K-19: The Widowmaker), Ford went back to well and donned his famous battered fedora in Indiana Jones and the Kingdom of the Crystal Skull. That was a sorely needed hit for Ford, but does it really rate as a comeback? Let’s take a look:

Star Wars – I don’t know if you ever managed to catch this little sci-fi flick, but it put Ford on the map in a massive way. To quote Peter Griffin in Family Guy’s send-up, Blue Harvest: “I’m Han Solo, captain of the Millennium Falcon and the only actor whose career wasn’t destroyed by these movies.” As Captain Solo, Ford brought a rogue-ish, rough-hewn charm to the series. If you grew up watching the Star Wars movies, you were probably surprised by the Han Solo-shaped void in the prequels, which were dangerously short on charm or heart.

Raiders of the Lost Ark – in 1980, Ford reprised his role as Han Solo in The Empire Strikes Back, widely considered (by me as well) to be the best of the original Star Wars trilogy. That same year, producer George Lucas, screenwriter Lawrence Kasdan and director Steven Spielberg gave the world another iconic hero played by Ford. As swashbuckling archaeologist-adventurer Indiana Jones, the actor proved himself as durable an action star as John Wayne or Clint Eastwood while reinventing the Hollywood action hero as a grumpy Everyman you can’t help but love, shooting people rather than bothering with a sword fight.

Depending on your generation, you’ll either love Raiders, Temple of Doom or Last Crusade more – for me, Doom is too harsh (and from a technical standpoint, the continuity is atrocious – check out the scene when the guy’s heart is torn out, and count the continuity errors from shot to shot), Last Crusade is great but strangely tame. Raiders is the one for the time capsule. “It’s not the years, sweetheart, it’s the mileage.”

The 80s were by far Ford’s strongest decade. He reunited with Lucas and Spielberg for two more Indiana Jones movies and went on to work with directors like Peter Weir (in Witness), Mike Nichols (his rather wonderfully warm comic turn in Working Girl) and Roman Polanski (Frantic).

Their Point of Decline Six Days Seven Nights – Granted, the 90s gave Ford some big hits with Patriot Games, Clear and Present Danger and Air Force One, but after such a strong run in the previous 15 years, director Ivan Reitman’s painfully awful “comedy” was Ford’s first real slip-up. (I’ll take arguments for The Devil’s Own, the almost proudly-formulaic thriller featuring Ford opposite Brad Pitt’s blond dye-job and lame Irish brogue, but that film was at least watchable) Ford played a gruff pilot on the run with uptight magazine editor Anne Heche after a crash-landing. Heche and Ford have zero chemistry, the plot has zero surprises and Reitman had apparently been abandoned by his comedic gifts.

After that: the anemic Random Hearts, a brief flirtation with against-the-grain casting in Robert Zemeckis’ sorta-entertaining What Lies Beneath and then, the seemingly impossible – a boring submarine movie directed by Katherine Bigelow: K-19: The Widowmaker. Ford seemed to be trying in Firewall…but nobody cared and it was boring, anyway.

As reported in Sharon Waxman’s excellent book Rebels on the Backlot: Six Directors and How They Conquered The Hollywood Studio System, Ford was approached for the role of Robert Wakefield in Steven Soderbergh’s Traffic. Ford had initially expressed a desire to work with some edgy young directors, but upon learning about Soderbergh’s directing style (multiple cameras per set up, meaning Ford would spend most of his time acting, rather than waiting in his trailer), the star stalled and stalled until the part went to Michael Douglas. Ford’s choices during the 90s were about one thing: playing it as safe as possible.

The loudest coffin nail of Ford’s career echoed throughout the land when Ron Shelton’s pitiful Hollywood Homicide landed with a resounding thud. Add in last year’s painful Extraordinary Measures and we thought we had lost one of our favorite stars. Until… Cowboys & Aliens – Sure, Ford hopped gamely back on the gravy train for Indiana Jones and the Kingdom of the Crystal Skull, and he was one of the few bright spots of Morning Glory, but the trailer for Jon Favreau’s 2011 summer blockbuster-to-be was what really gave Ford fans a glimpse of the hero they remember. Ford has never done an “actual” Western, and this fun-looking genre mash-up may be the closest he’ll ever come. He looks great in this world, he looks cool in that cowboy get-up, and he has more star wattage even at his age than Daniel Craig will ever have. The trailer alone is enough to give us hope.

And what does this say about the state of Ford’s career? Given his bizarre appearance on Conan in November of 2010,  he’s either living on Xanax or simply indifferent to his career at this point. He may have been a bit drunk on Conan’s chair, but it’s pretty clear he’ll do another Indiana Jones flick only for the money. What about playing a retirement-aged Han Solo? Hell, we can dream, can’t we?

What do you think about Mr. Ford’s career highs and lows? Which is your favorite Harrison Ford performance?