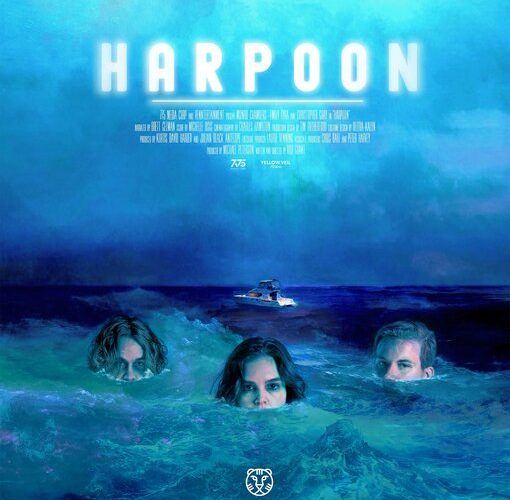 ‘Harpoon’ Review: Aquatic Horror That Finds Authenticity Beneath the Gore

Writer/director Rob Grant wastes zero time getting us in the right frame of mind with Brett Gelman’s perfectly sardonic voice narrating an auspiciously violent collision of three close friends caught in a lovers’ misunderstanding. Harpoon‘s first scene provides effect—a stranded yacht in the middle of the Atlantic Ocean with “SOS” duct taped to the deck—while the second supplies cause as Jonah (Munro Chambers) gets his face punched in by best friend Richard (Christopher Gray) with the latter’s long-term partner Sasha (Emily Tyra) imploring him to stop. Move those temperamental seeds of mistrust to a boat’s tight quarters and we can guess why the vessel will eventually find itself in distress. The question then becomes which, if any, of those passengers will be alive to accept help. The misunderstanding: Richard thinks Jonah and Sasha are having an affair. It stems from texts found on her phone that were about something completely different, but even Richie Rich’s aggressive streak wouldn’t jump to conclusions that fast without other signs. So despite the trio’s round of “Even Stevens” to make up for this latest example of brutality, doubt and suspicion have already set in. Gelman’s descriptions of the types of friendships we make therefore gain increased meaning (Jonah respects Richard while Richard uses Jonah and Sasha loves Richard while enjoying Jonah’s company) because his addition to Aristotle’s ideas of respect, love, and utility encompasses them all. History, he posits, often keeps people together even when they no longer recognize each other. History sows fear, pity, guilt, and betrayal.

It manifests in side-eyed glares, cryptic lines of questioning, and a speargun pointed at someone’s chest. Suddenly these thick-as-thieves chums are at each other’s throats with malice in their eyes, joking about how they weren’t just trying to kill each other before turning to their potential allies and asking if he/she wants to join him/her to kill the third. These murderous thoughts they tell themselves would only go as far as injury initially spark from the smoldering embers of a secret (which begets another and so on), but it’s not long before they also discover they have nowhere to go. What started as a day-trip to let off stem and make amends becomes an adventure for survival once the ignition stalls. They’re without fresh water, food, or radio. What they do have in large supply, however, is the time necessary to turn on each other and perhaps forgive or forget. They also have the story of Richard Parker and his worst-case scenario of drawing the straw that lets his two compatriots eat him to survive. Add a slew of bad luck omens that Gelman is only too excited to share from his omniscient perch and control over their circumstances becomes permanently in flux. The person with the gun had it. Then it was the person with the keys. And then it was the person with a clean conscience until we find out everything we thought we knew was actually a lie. Will the escalating revelations strengthen bonds or weaken them? Will their love be rendered false?

These very plot-specific queries are Harpoon‘s DNA. Grant infuses some commentary as far as Richard having money, Jonah having nothing (his parents died and left him debt), and Sasha being trapped between a “nice guy” and an abuser, but it’s all merely for color. It gives the characters just enough depth to trick us with our own presumptions so the twists and turns coming have ample distraction with which to surprise. Don’t therefore expect three-dimensional characters as much as pawns placed on the board to battle for supremacy. That could be moral, physical, or mortal dominance as the days tick away and health grows dim. Lips become looser with their secrets and sanctimony reigns until treachery becomes the only surefire weapon that each can wield with expert precision. Thankfully that’s all we need for a good time because that’s the goal. Watching these three fall prey to impulse knowing they’ve all done something inexcusable they’re hoping stays under wraps is fun because there’s an authenticity beneath the gore. Richard’s rage is as real as Sasha’s fear and Jonah’s holier than thou attitude of being “better than” is exactly what a softboy like him possesses. They each have traits the others willingly ignore to reap the benefits of what the relationship provides otherwise and that keeps them honest by stoking the fire once patience runs thin and hunger rises. And as frustrations increase, so too does the possibility for cannibalism. They can draw straws, but we’ve spent enough time with them to know honor left the building.

Harpoon opens in limited release on October 3 and will hit VOD/Blu-ray October 8.