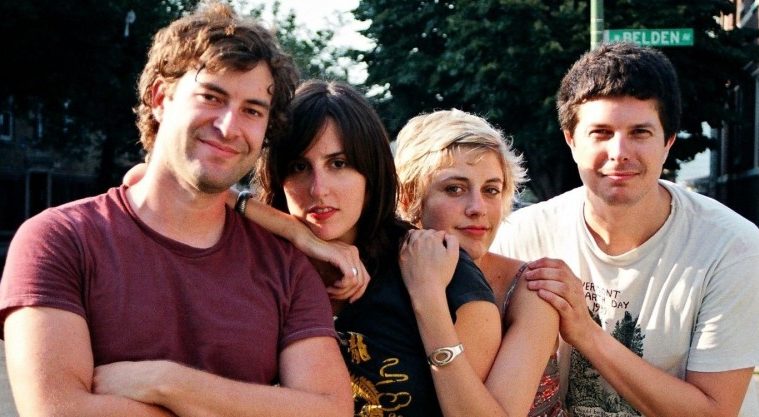 ‘Hannah Takes the Stairs’ and the Coalescence of Mumblecore

Declaring 2007 to be the year mumblecore came of age would be equally as fair as labeling it the year mumblecore collapsed. The signs of ascendance and coalescence—group coverage in high-profile publications, series programmed at art houses, distribution deals and commercial success on home video—arrived alongside backlash, essays aiming to identify the movement as a myth requiring disassembly. Joe Swanberg is a frequent figure of ire in these pieces. (Amy Taubin dedicates a sizable portion of her late-2007 ambivalent assessment of mumblecore to a formidable excoriation of the filmmaker.) Over the course of his efforts as director and writer, chiefly features Kissing on the Mouth and LOL and the webseries Young American Bodies, the lives of horny dorky dudes trying to get attractive female friends into bed had been singled out by critics as Swanberg’s primary concern. The reputation for bluster he had garnered in interviews and on the festival circuit must have made convincing detractors otherwise a burdensome task.

Fortunately Hannah Takes the Stairs came along to lessen that difficulty. While the film is by no means a complete 180 from Swanberg’s work up to that point, it sees the director’s established adeptness in observation and improvisation grow stronger. At the same time it mollifies the more navel-gazing dimensions of his filmmaking through an openness to collaboration. Then-SXSW director and mumblecore booster Matt Dentler called Hannah Takes the Stairs “the dream team film,” and seeing these actors and writers come together to bounce their cinematic personalities off of each other to create a greater whole lends that statement credence.

Take Mark Duplass as Mike, the first of Hannah (Greta Gerwig)’s three partners. Mike has decided to become a full-time layabout and tries to elbow Hannah into following him, right as she’s beginning to find her place in the writer’s room at a small production company. Mike is outwardly friendly, but those in close proximity to him eventually find that off-putting or even oppressive—as their relationship ends Hannah can’t touch him. His niceness masks a sour tinge of desperation, a tone that dominates in Duplass’s own films like The Puffy Chair and Baghead. In Hannah Takes the Stairs it’s a temporary undercurrent moving Hannah along and sending her into the arms of her coworker Paul, played by Andrew Bujalski.

Paul’s kindness isn’t demanding, and he’s more conventionally ambitious upon landing the opportunity to turn his blog into a book. Paul would fit right in in an Andrew Bujalski movie. He’s a bit offbeat, intelligent and wordy, composed and seemingly comfortable in his awkwardness. This belies his reserved nature, his failure to show any strong feelings or perform emotional labor. Instead he constantly tends to e-mails and calls as he attempts to work out a book deal. With this thread Swanberg carries over his interest in the intersection of modern technology and romantic relationships that was the focus of LOL; rather than acting as a driving force, in Hannah Takes the Stairs its presence is background dressing. The torpid nature of jobs performed entirely on computer screens and the ubiquity of cell phones factor into how Hannah and her friends move through the world. They are not, however, a generational malady. Technology is evidence of Paul’s lack of sensitivity and his inability to be around Hannah, just doing nothing.

And doing nothing is what Hannah Takes the Stairs does best. Where other mumblecore works can strike as portentous through the breathless efforts to make the quotidian seem important, this film is comfortable with its hangout vibe. Supporting characters like boss Duges (Todd Rohal), office assistants Minnie and Gaby (Tipper Newton and Kris Swanberg), and Hannah’s roommate Rocco (Ry Russo-Young) are present to serve as occasional sounding boards and to kill time in dumb ways alongside the rest of the cast, to alleviate the drudgery of a hot Chicago summer. In the writer’s room with Hannah and Paul, Matt (Kent Osborne) plays with his fat rolls and poses like an old-timey boxer. The trio chuck a combination frisbee-ball back and forth. Paul and Hannah peer out the office window at a peculiar man having a meltdown on the sidewalk. Rocco and Hannah dance like idiots in their apartment, then recline in front of a fan. Hannah, Matt, and Rocco get drunk and doodle. When Matt and Hannah discover they both play the trumpet, they meet up to badly approximate the “1812 Overture.” This is sublime inactivity firmly rooted in the tradition of Slacker and Stranger than Paradise.

All this nothing-at-all carries Hannah to the realization that someone like Paul who be still and available is just as ill-fitting for her as a partner as Mike—it’s Matt around whom she’s most comfortable. Hannah and Matt are equally capable of talking about the shows and plays they’re writing as they are playing with a collection of toy songbirds. In Matt she sees a complete possible future, with Paul and Mike she’s frozen by the insurmountable obstacles ahead. Osborne, who is credited as a co-writer alongside Gerwig and Swanberg, combines his silliness with an emotional intuition that can also be found in his work on Adventure Time to become the clear choice for Hannah’s happiness.

It’s also plain to see on Gerwig’s face. Gerwig’s since excelled at writing screenplays in which meticulously crafted lines sound improvised, an aptitude cultivated improvising on the sets of films like Hannah Takes the Stairs. Appropriately given her title billing, Gerwig puts her stamp on the film more than any other cast member. Through her expressions and carefully calibrated inarticulateness she communicates volumes. Hannah knows her twentysomething problems are dumb and quotidian—they weigh on her all the same, and her choices will inevitably shape her life. Each guy is a path forward and with each choice she closes off an entire branch of possible lives, further calcifies her twenties as something that happened as opposed to something that’s happening. The specter of an unknown future is nerve-wracking because she knows it will soon supplant the present.

Growth can look different for different people. Gerwig has acted for auteurs like Whit Stillman and Todd Solondz, written alongside Noah Baumbach, and has her first solo directorial effort is set for release this year. Swanberg has a second season of his Netflix series Easy on the way; it may be a low-key comedy-drama about the romantic lives of Chicagoans just like Hannah Takes the Stairs, but Swanberg’s more exacting yet unadorned framing, the skill with which he draws naturalistic performances out of actors of all levels of renown, and the nuance with which he examines relationships at all stages show him to be operating at the peak of his talents. As distinct as these presents are, they both represent growth, and they can both be traced back to a moment when the young filmmakers central to a jokingly-named movement pooled their talents to create a film that feels easy and right. The same can be said of Hannah’s choice to start a relationship with Matt: it’s an easy choice and obviously right, which is precisely what marks it as a defining moment of growing up—because maybe growing up is admitting all you need is someone who’ll get in the bathtub with you and mangle Tchaikovsky.