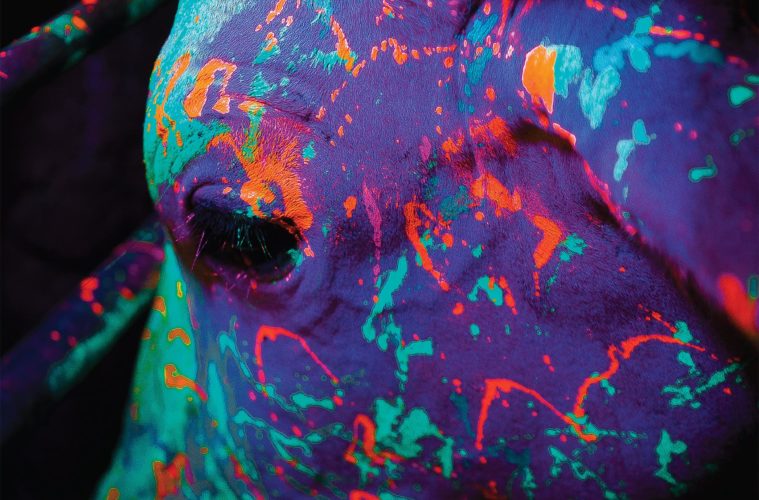 From Blue Is the Warmest Color to Stranger by the Lake, from Pride to The Danish Girl, movies dealing with LGBT issues or characters have become ever more present at film festivals and cineplexes these past years. Against such background it’s especially intriguing to consider something like Neon Bull – a Brazilian rodeo drama in which everybody turns out to be straight – and its place in queer cinema. The story is centered around hunky groundskeeper Iremar (Juliano Cazarré), who spends his days at a rodeo in rural Brazil taking care of the animals, keeping up the localities and assisting with the races. On these chores he’s joined by a small, tightly-knit group of people including precocious girl Cacá and her mother Galega. They all dine together and sleep in neighboring hammocks, collectively facing down the monotony of an arduous, menial existence more as a family than co-workers. Iremar, meanwhile, has a passion one doesn’t necessarily associate with his work or lifestyle – he’s totally into making clothes, from the designing all the way to the cutting and fitting. Without ever explaining where this enthusiasm came from, scenes where the tough cowboy is seen sewing at night or dressing mannequins appear random and almost disorientingly at odds with his circumstances. Our preconceptions are further played with when he has Galega bend down in front of him in a suggestive position or sneakily flips open a dirty magazine to the picture of a naked female model, only to go about taking the young woman’s measurements and drawing imaginary garments onto a masturbation-tested page.

It doesn’t stop at the tease with gender roles and macho stereotypes either. Subtly but surely, Mascaro establishes a fevered, deeply sensual visual language that, while never describing same-sex intimacy of any kind, releases a strong homoerotic charge. Not only is there a marked focus on male anatomy – see a group shower scene shot on steamy lens and the sequence where Iremar has to stroke a prize stallion’s comically engorged genitalia in order to steal its semen – which deviates from the female objectification customary in mainstream, heterosexual cinema, the overall languid, yearnful tone highlights a repressed quality of the rampant carnality threatening to break free. In this sense, it registers as a near-surprise when the sexual preference of the main characters is revealed towards the end.

One could fault the movie for being narratively lacking because, admittedly, there isn’t much of a coherent plot making some kind of point. Galega doesn’t overcome any challenges, neither does Cacá come of age. It’s not really about Iremar’s endeavors to realize his dream, nor is it a systematic critique of a society that leaves parts of its citizenship living under impoverished conditions. However, even within this loose storytelling structure, Neon Bull still functions as a casually transportive experience and a compelling investigation of masculinity in modern-day Latin America. Driven by Mascaro’s freely associative direction that draws heavily from the physicality and animalistic nature of rodeo races, the film approaches human sexuality on a subliminal level that feels raw, essential. By breaking down taboos like explicit phallic depictions and the asexual sanctity of pregnant women, it further gains a subversive edge usually seen in queer cinema. Cinematographer Diego García, who also shot Thai director Apichatpong Weerasethakul’s mesmerizing Cemetery of Splendour, provides by turns breezily idyllic and swelteringly sensuous images here. The prolonged, one-take sex scene that more or less concludes the movie is captured with such unblinking intensity it packs the impact appropriate for all the pent-up desires as well as the story’s one unexpected revelation.

Cunningly ambivalent and stickily atmospheric, Neon Bull is an impressive exercise in style that further broadens the possibility of queer filmmaking. One only wishes it could have embedded such daring and verve in a more fully realized context.

Neon Bull screened at Filmfest Hamburg and will be released by Kino Lorber on April 8th.