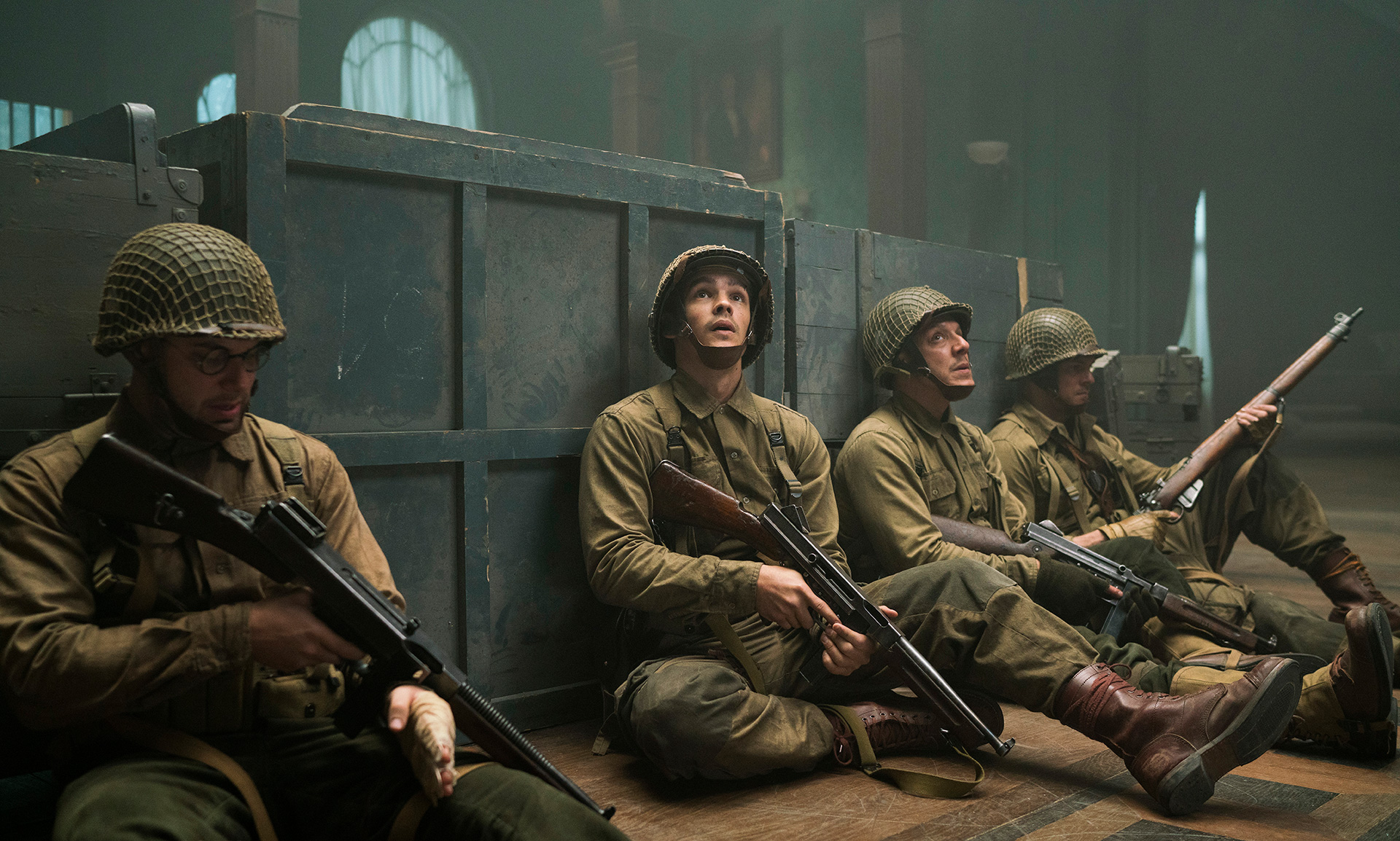 Sometimes the memories of our inaction haunt us more than the actions we have committed. This can be especially true at war once you return home to realize the blood on your hands goes far beyond the lives you were directly responsible for extinguishing. Whether you found yourself helpless to act because of a direct order from your superior or you simply froze out of justifiable fear, the screams of those lost will remind you of your complicity either way and haunt your dreams like a curse from the dead. People who weren’t there brush off this nightmarish scenario by saying these horrors are a means to an end, but such judgments won’t alter their psychological impact upon those who’ve experienced them. Our consciences aren’t built to forget.

What is it that haunts the heroic soldiers of Eric Bress’ Ghosts of War? What makes Chris (Brenton Thwaites) think that he saw the silhouette of a man lighting a cigarette above the sleeping bodies of his men (Skylar Astin’s Eugene, Kyle Gallner’s Tappert, Theo Rossi’s Kirk, and Alan Ritchson’s Butchie) before raising a gun? In German-occupied France at the tail end of World War II, the cause could be anything. Memories of the carnage at Normandy, subsequent battles fought, and even the calmer times amongst Nazi sympathizers take their toll until closing your eyes becomes its own form of Russian roulette. All Chris can hope for now is that their last mission will provide respite. With orders to housesit a reclaimed French villa, how could it not?

Noticing that the men they’re relieving on this detail can’t wait to leave becomes the first sign of many that appearances will always be deceiving. While Chris and the rest revel in the fact that they’ll finally have beds to sleep in and brandy to drink before touring the immense structure, it’s not long before sounds and sights usher in an unsettling unease. Morse code is heard from the chimney. Footsteps stomp away on the floor above them. Glimpses of shadows in distress can be seen for an instant until the wind pushes reality back into focus. And the discovery of a Nazi journal documenting what was done to the family that owned the property reveals the impossible notion that this house might just be haunted.

It’s an interesting decision to make on behalf of Bress considering the circumstances he’s created for his quintet of soldiers don’t need the supernatural to invite in demons. The ghosts they’ve left in their own wake should be scary enough, so why introduce spirits with whom they have no quarrel? Hearing Eugene recount the day he found Tappert covered in blood with the headless bodies of Hitler Youth children could fuel terror for days let alone the ease at which they all dispatched of a retreating Nazi jeep on the road to their current position. The glee at which Butchie excitedly puts up his fists to box an SS officer tells more about their taste for violence and its unavoidable cost than the ominous presence of unfamiliar ghosts.

Some of Bress’ reasons are soon revealed with the arrival of a Nazi convoy those spirits are happy to kill right alongside their new houseguests. More appear with the screams of a fallen friend to expose this world as a merging of realities within a geographical loop that won’t allow for their escape. This occurs with an effective mix of horror and war genre tropes that force us to wonder whether the presence of these antagonistic entities may actually provide a means for assistance. Their thirst for vengeance is blind to the fact that these Allied troops are getting hurt in the crossfire, but some of the boys’ lives are saved too. So what is really happening? What must Chris and his company do to leave?

The answers to these questions ultimately come via an exposition dump right before the film’s end, but their existence might arise earlier for those recognizing Shaun Toub as the patriarch of this French family of ghosts. You don’t cast a well-known Persian to simply be a face on a portrait, so the mind starts putting pieces together as far as time, place, and projection go. There are many exciting directions for the story to take as a result and Bress does choose one of them … mostly. He acknowledges the emotional connection that can be made between wars decades apart and begins scratching the surface of denial’s power to alter perception when the truth is too difficult to bear, but he also refuses to minimize the supernatural elements.

This prevents Ghosts of War from reaching its potential as a cult favorite alongside psychological war horrors like Jacob’s Ladder. Rather than utilize the supernatural and sci-fi underpinnings as an in-road towards exposing the human mind’s capacity for self-destruction, Bress doubles down on this being a ghost story above all else. While it does effectively give meaning to what occurs, however, it also undermines the potency of knowing the grief these soldiers experience comes from within. By writing everything that happens off as a curse (regardless of the twists and turns taken to separate fact from fiction and life from artificial construct) means the subconscious actions of Chris, Eugene, Tappert, Kirk, and Butchie are rendered secondary. By giving power to external forces, you remove it from their guilt.

Everything setting the stage for this puzzle box mystery is thus diminished by a conclusion that rings hollow thanks to the film being more interested in its own structure than the emotions mined within. That being said, I do still feel more satisfied with the whole than not because of how the performances are able to help offset some of this disappointment (Gallner is especially memorable). It’s through these actors that we see how their characters process their pain above and below the façade created and understand why they’re incapable of looking beyond their tragic wealth of regret. As soon as you give the “curse” form by removing it from that process, however, you mistakenly shift the fight from past to present—from their shame to their fear.