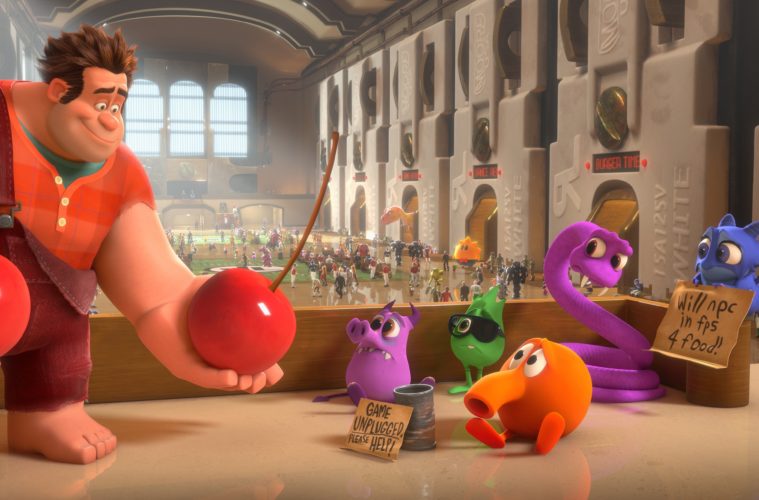 UPDATE: The trailer has arrived.

With the videogame mecca E3 occurring as we speak, there’s no better time to Disney to amp up marketing for their upcoming animation Wreck-It Ralph, from frequent Futurama director Rich Moore. With a voice cast including John C. Reilly, Jane Lynch, Jack McBrayer and Sarah Silverman, the story follows a videogame character who wreaks havoc by accidentally unleashing a deadly enemy into a first-person game.

We’ve got a trailer coming this week, but ahead of its released we also have four, crisp new images from the film. My personal favorite sees stranded videogame characters in Grand Central Station, including one “homeless” fellow who “will npc in fps 4 food!”; awesome. Check them out below via USA Today, including captions, for one of our most-anticipated animations of the year.

Wreck-It Ralph (left) adopts a more charitable persona as he offers cherries taken from a Pac-Man game to the out-of-work characters from an unplugged Q*bert (right). Says actor John C. Reilly, who speaks for Ralph: “When I was a kid, I would wonder what was going on inside my GI Joes and other toys I was obsessed with. Wreck-It Ralph gives an Alice in Wonderland take on what happens when you enter the world of a video game.”

This might look like your average everyday power strip. But don’t be fooled. For Ralph and his arcade buddies, it is their answer to Grand Central Station as they travel into one another’s video games.

Envelope-pushing comic Sarah Silverman speaks for Vanellope von Schweetz (right), part of the candy-themed go-kart racing game Sugar Rush. “Sarah does the voice of a little kid as only Sarah could do,” says director Rich Moore. “Ralph sort of becomes a big brother to her.” Based on Mario Kart, the games features vehicles shaped like high-octane desserts.

Jane Lynch, who plays cheerleading coach Sue Sylvester on Glee, gets a promotion as the voice of the rough-and-tough Sgt. Calhoun in Hero’s Duty. Ralph enters the sci-fi first-person shooter game and becomes an alien-fighting soldier to prove that he can be a good guy for a change. Says Wreck-It Ralph director Rich Moore: “Calhoun has one of the most tragic back stories ever. Her fiance was eaten at the altar on their wedding day after she forgot to do a perimeter check.” “Wreck-It Ralph (voice of Reilly) longs to be as beloved as his game’s perfect Good Guy, Fix-It Felix (voice of McBrayer). Problem is, nobody loves a Bad Guy. But they do love heroes… so when a modern, first-person shooter game arrives featuring tough-as-nails Sergeant Calhoun (voice of Lynch), Ralph sees it as his ticket to heroism and happiness. He sneaks into the game with a simple plan—win a medal—but soon wrecks everything, and accidently unleashes a deadly enemy that threatens every game in the arcade. Ralph’s only hope? Vanellope von Schweetz (voice of Silverman), a young troublemaking “glitch” from a candy-coated cart racing game who might just be the one to teach Ralph what it means to be a Good Guy. But will he realize he is good enough to become a hero before it’s “Game Over” for the entire arcade?”