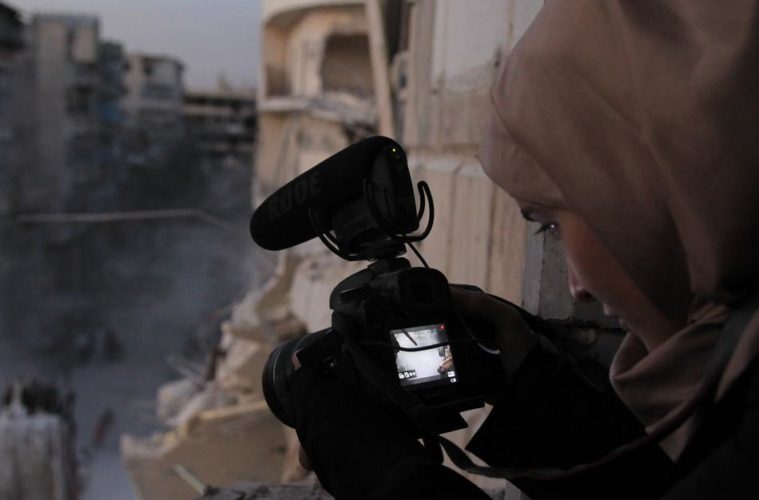 ‘For Sama’ Trailer: A Searing Portrait of Syria Through a Young Woman’s Eyes

Following its world premiere at SXSW (where it won the top documentary prize), For Sama is an official selection at this year’s prestigious Cannes Film Festival, and it’ll arrive in theaters this summer. PBS Distribution has now unveiled the first trailer for the harrowing and essential documentary, which conveys the female experience of living though an active war zone through the lens of first time co-director Waad al-Kateab. The film shows al-Kateab’s life though five years of the uprising in Aleppo, as she falls in love, becomes a mother, and gives birth to the titular Sama. The film grapples with love, loss, and the arduous choices one must make as a mother to protect her loved ones, even if it means abandoning one’s homeland.

John Fink in his review wrote, “ Co-directed with Edward Watts, For Sama’s structure mirrors the chaos of the moments it captures, simultaneously connecting both her personal and the political past, present and future as she feels an affinity for her home while also lamenting the conditions they are living under. When she gives birth to her second child, away from her Syria she comments that she smells the city. For Sama is no doubt powerful in its immediacy and its unafraid to shy away from the gory details as families–including al-Kateab’s own–become casualties of war, her dreams differed… For Sama is a harrowing experience and certainly one of the most essential films of the year.”

FOR SAMA is both an intimate and epic journey into the female experience of war. A love letter from a young mother to her daughter, the film tells the story of Waad al-Kateab’s life through five years of the uprising in Aleppo, Syria as she falls in love, gets married and gives birth to Sama, all while cataclysmic conflict rises around her. Her camera captures incredible stories of loss, laughter and survival as Waad wrestles with an impossible choice- whether or not to flee the city to protect her daughter’s life, when leaving means abandoning the struggle for freedom for which she has already sacrificed so much. The film is the first feature documentary by Emmy award-winning filmmakers, Waad Al-Kateab and Edward Watts.