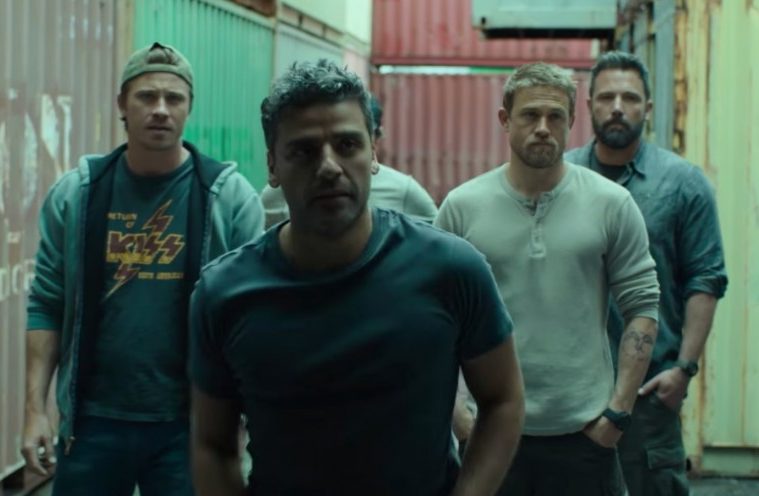 One of the longest-gestating projects in Hollywood this decade has been Triple Frontier. With actors including Tom Hanks, Johnny Depp, Leonardo DiCaprio, Sean Penn, Christian Bale, Tom Hardy, Mahershala Ali, and Will Smith all interested at one point or another–along with director Kathryn Bigelow–production on the Mark Boal story finally got underway with All is Lost, Margin Call, and A Most Violent Year director J.C. Chandor.

Now with the cast of Ben Affleck, Oscar Isaac, Charlie Hunnam, Garrett Hedlund, Pedro Pascal, and Adria Arjona, the Netflix-backed project will debut this March and the first trailer has landed. As scripted by Chandor and Zero Dark Thirty and The Hurt Locker writer Boal, the thriller tracks a black ops operation in the organized crime/drug war zone of South America.

See the first preview below.

A group of former Special Forces operatives (BEN AFFLECK, OSCAR ISAAC, CHARLIE HUNNAM, GARRETT HEDLUND and PEDRO PASCAL) reunite to plan a heist in a sparsely populated multi-border zone of South America. For the first time in their prestigious careers these unsung heroes undertake this dangerous mission for self instead of country. But when events take an unexpected turn and threaten to spiral out of control, their skills, their loyalties and their morals are pushed to a breaking point in an epic battle for survival. Directed by Academy Award® nominee J.C. CHANDOR (Margin Call, All Is Lost, A Most Violent Year) and co-written by Chandor and Academy Award® winner MARK BOAL (The Hurt Locker, Zero Dark Thirty).