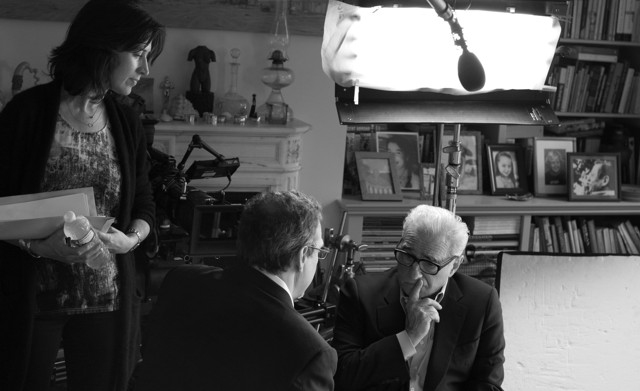 First Trailer For Martin Scorsese’s ‘The 50 Year Argument’; ‘Silence’ Will Be a “Little Art Film” Past the age of 70, Martin Scorsese‘s output continues at an incredible pace. After dedicating virtually all of last year (and more) to shooting and finishing The Wolf of Wall Street, he found time to co-direct (with David Tedeschi) a documentary chronicling the 50-year history of The New York Review of Books. Set to stop by TIFF and NYFF ahead of a premiere on HBO later this month, the first teaser has landed today.

First, however, we have a few, very brief details on the next narrative feature from the director, Silence. Led by Andrew Garfield, Liam Neeson, Ken Watanabe, and Adam Driver, we know it will have “smaller approach” than his average work. Now his long-time editor Thelma Schoonmaker has chimed in, telling Deadline that the Taiwan-set production about 17th-century Jesuits will be “a little art film” with a small budget.

She added,“We’re all taking a big cut to work on it” and it’s “so different from Wolf Of Wall Street, you can’t imagine.” We’d have to hope so considering the disparate source material. She went on to say the director “sets himself a new challenge and wants to change. He doesn’t want to repeat himself” despite the notion that “everybody would like us to make Goodfellas over and over and over again.” As we await a late 2015 release for that project, check out the trailer and poster for his latest below.

The 50-year history of The New York Review of Books is chronicled by co-directors Martin Scorsese and David Tedeschi in The 50 Year Argument, which takes viewers behind the scenes with the journal’s editor Robert Silvers and many of the writers and pundits who have collaborated on the publication through the years. From the publication’s origins in 1963, when it was created to fill a void left by a citywide newspaper strike, the publication has evolved from a platform to review new books by contemporary authors to an editorial forum for some of the most creative minds in the world, dubbed “the premier literary-intellectual magazine in the English language.” The documentary includes recent interviews with many past and present contributors, as well as archival footage of such literary lions as Norman Mailer, Gore Vidal, Susan Sontag, William Styron, and others. The 50 Year Argument airs on HBO on September 29th.