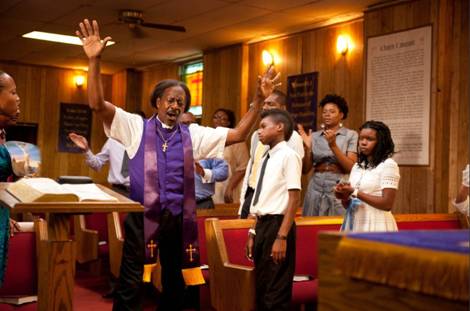 If there was a film that stirred up the most controversy at Sundance this year, it was certainly the latest from Spike Lee. His low-budget drama Red Hook Summer was received with divisive response during its premiere. We liked it, others despised it and now everyone will finally get the chance to have their own take as Deadline reports that Variance Films have picked it up for an August 10th release. They’ll first release it in Lee’s home city New York and then expand to top 30 markets the rest of the month.

The film follows Flick Royale (Jules Brown), who comes to live with his grandpa Clarke Peters (Lester Freamon from The Wire) in Red Hook, Brooklyn for the summer. On the rocks with his daughter, he’s determined to convince his grandson to find God in his church, Little Heaven. Unfortunately, Flick just wants his school-free summer. Thankfully, a cute girl his own age, Chazz Morningstar (Toni Lysaith), also attends the church, giving Flick a reason to alternatively obey and rebel against his grandfather.

We’ve got the first teaser today via the official Red Hook Summer site. It’s a brief look, with behind-the-scenes footage mixed in, but certainly provides a peek at the sweaty environment so perfectly captured in Lee’s early days. The soulful film has a sprawling narrative and I’ll be interested to see if Lee cuts it down as all. Looking back, it’s one of the Sundance films I recall most just for some of the crazier places it goes. Check out that teaser below.