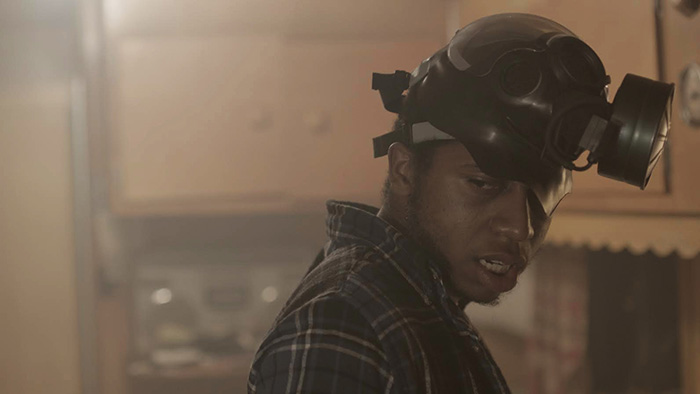 The first strange, intriguing teaser has been unleashed for the SXSW premiere The Alchemist Cookbook. The third feature from Joel Potrykus, who last delivered the brilliant Buzzard, the film concerns a hermit attempting to crack the code for an ancient mystery, but winds up paying a price for his ambition and mania. The teaser opens with a distorted, zoomed-in image of Donald Trump announcing his run for presidency, followed by the hermit sharpening a blade. Whether or not this visual connection relates to the final product is unclear, but it is an eerie and relevant concoction that makes for a memorable teaser.

We said in our review: “I bet another viewing would reveal missed details, but the threat of being wrong and finding myself enduring the slow, quiet madness again scares me. I want to hear the growl of whatever lies in waiting at the beginning to match it with noises at the end. I want to contrast Sean’s attitude before Cortez’s initial visit with the aftermath of his second. And I want to pay attention to the camera angles to see if we’re watching omnisciently or as a character yet unseen. Maybe knowing the boring stretches exist will force me to look away from Sean at whatever Potrykus may have hidden in plain sight when they do. I only wish it had invested me more to muster the enthusiasm that’s necessary to revisit later.”

Young outcast Sean has isolated himself in a trailer in the woods, setting out on alchemic pursuits, with his cat Kaspar as his sole companion. Filled with disdain for authority, he’s fled the daily grind and holed up in the wilderness, escaping a society that has no place for him. But when he turns from chemistry to black magic to crack nature’s secret, things go awry and he awakens something far more sinister and dangerous. After a slew of festival screenings, The Alchemist Cookbook will be released this fall.