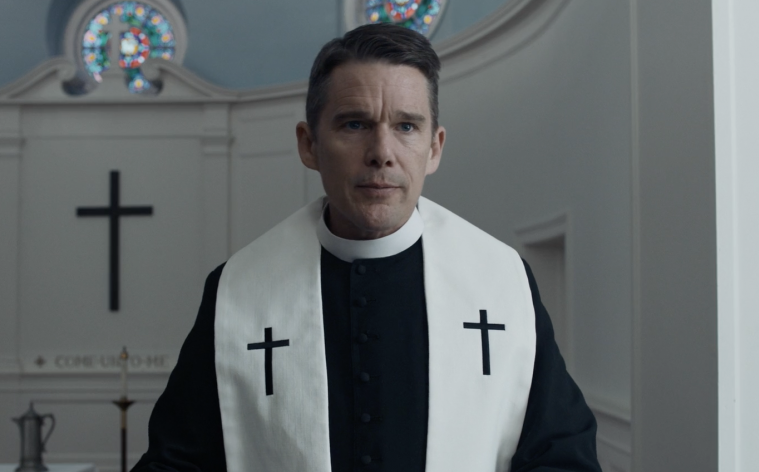 ‘First Reformed’ Trailer: Ethan Hawke Walks Through the Valley of the Shadow of Death

Premiering on last year’s fall film festival circuit, Paul Schrader’s dark, existential spiritual drama First Reformed is one of the director’s best films–perhaps the best–and, in great news, you’ll be able to see it sooner than expected. Picked up by A24 and initially pegged for a late June release, they’re moving it up to May 18 and now the first trailer has arrived.

Led by Ethan Hawke, he plays a reverend with a drinking problem in upstate New York whose church is preparing for a 250th anniversary celebration. When the pregnant wife (Amanda Seyfried) of a disturbed man comes for him to help, questions of his spiritual path and the world at large come crashing down in wholly unexpected ways. Of course, it feels like a follow-up to Taxi Driver in some light for Schrader, but it’s also its own clear-eyed beast.

“It seems that some of Schrader’s own directorial efforts, be it American Gigolo or Light Sleeper, were certainly an attempt to complete the “Transcendental” experience to one degree or another,” Ethan Vestby said in his review. “Yet four decades later, First Reformed — which, should be mentioned, also seems to be taking from Bergman’s Winter Light and Tarkovsky’s Sacrifice in the religious cinema canon — may be the full realization of Schrader’s vision.”

See the first trailer and poster below.

Reverend Ernst Toller (Ethan Hawke) is a solitary, middle-aged parish pastor at a small Dutch Reform church in upstate New York on the cusp of celebrating its 250th anniversary. Once a stop on the Underground Railroad, the church is now a tourist attraction catering to a dwindling congregation, eclipsed by its nearby parent church, Abundant Life, with its state-of-the-art facilities and 5,000-strong flock. When a pregnant parishioner (Amanda Seyfried) asks Reverend Toller to counsel her husband, a radical environmentalist, the clergyman finds himself plunged into his own tormented past, and equally despairing future, until he finds redemption in an act of grandiose violence. From writer-director Paul Schrader (Taxi Driver; American Gigolo; Affliction) comes a gripping thriller about a crisis of faith that is at once personal, political, and planetary.

First Reformed opens on May 18.