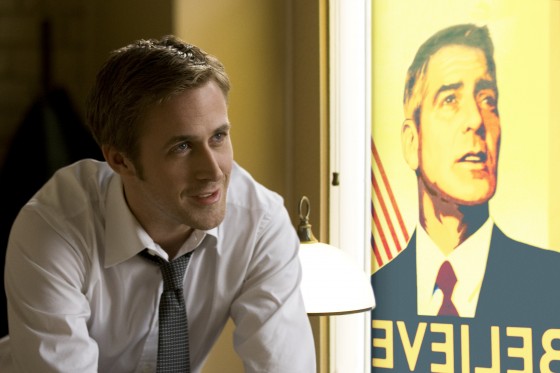 One of the films I’m most looking forward to catch on the fall film festival circuit is George Clooney‘s directorial effort Ides of March. He stars in the political drama with Ryan Gosling (who is about to gear up for a huge year with Crazy, Stupid, Love. and Drive).

We now have the first official image and it features Gosling (and Clooney, if you count in the form of a poster). Check out above, along with a synopsis of the film below for the film also starring Philip Seymour Hoffman, Marisa Tomei, Paul Giamatti, Jeffrey Wright, Max Minghella and Evan Rachel Wood.

The Ides of March takes place during the frantic last days before a heavily contested Ohio presidential primary, when an up-and-coming campaign press secretary (Ryan Gosling) finds himself involved in a political scandal that threatens to upend his candidate’s shot at the presidency. The rest of the cast includes

With a script from George Clooney, Grant Heslov, and Beau Willimon (based on his hit play), the film hits theaters October 7th, 2011. Expect it at Toronto after a Venice Film Festival opening premiere on August 31st.

What do you think of the first image from the film? Is it one of your most-anticipated features this year?

[Source: We Are Movie Geeks]